Heat Rating: Sextreme
Word Count: 48,456
7 Ratings (4.7)
Menage a Trois/Quatre Paranormal Shape-shifter
In Bookshelf
In Cart
In Wish List
Available formats
PDF
Mobi
HTML
ePub
Cover Art by Les Byerley
Reviews
Another great book in the series.
Jlg29
I love Becca Van and any of her stories. This was just the icing on the cake. I was so happy to see Lance and his pod mates find the love of their life.
rhondavb
Read more...

When Lady Guinevere began to give orders to the other ladies, Lance glanced toward Merlin and when he saw that the witch and wizard were only yards apart he moved his hand to the hilt of his sword, ready to fight and defend.

“Do not,” Merlin spoke directly into Lance’s mind. “You will not fight this day. Get the women out of here.”

“Lady Guinevere, ladies, please, we must leave.” He tried once more to talk her and the other ladies into hiding.

“No,” she cried, tears streaming down her face as she avoided his outstretched hand and began to run toward her mate, Arthur. She stopped and turned to look at him with a determined glint in her eye. “Please promise me you will care for our children.”

Lance didn’t like what he thought she was about to do but vowed to protect her and the other women with his life, but he also couldn’t refuse her anything when she asked. If it weren’t for her, Arthur and Merlin, he and the other knights would have died years ago. He took a step forward and met her gaze and nodded.

“I promise to look after the young ones.” Lance placed his fist on his heart as he swore his fealty.

“As if they were your own,” Lady Guinevere added.

Lance nodded, his fist still on his chest, resting above his heart. “As if they were my own.”

Lance saw relief in his friend’s mate’s eyes and just as she turned the other women hurried over to stand close to her, their hands holding what weapons they had been able to find or remove from dead hunters, all of them ready to fight. He didn’t want the women fighting alongside their men because he knew they would end up dying. Even though they had enhanced strength and senses after being claimed by their mates, except for Lady Daria, their strength and numbers wouldn’t be enough to win.

After glancing over to check on his flight pod brethren and seeing that Galahad and Gawain were holding their own, he took a step to follow the women, prepared to give his last breath to save them, but a bright blinding light began to pulse and expand, freezing him in his tracks.

He squinted to better see and saw that Merlin’s and Rose’s magic were combining. The light from Merlin’s staff was so white and bright and he watched in awe as the stream of the purest white magic emanating from Merlin’s staff twined with the red streak coming from Rose’s hand.

Just then a loud crack echoed across the field. Merlin’s free hand lifted and pointed directly at him. His mouth gaped with awe when another bolt of white light shot from Merlin’s hand and hit him in the chest. He staggered back as the force of power and the pain, too much to bear, sent him to his knees. Fire raced through his body and his whole frame shook and shuddered in agony.

At first he thought Merlin had lost his mind and was trying to kill him but as the quaking in his muscles increased so did the sensation of power. His body had already been muscular from all his sword training and then being turned into a dragon shifter, but they began to bulge even more and he wondered if his muscles would rip apart his skin. Fiery tingles raced across his flesh and he wondered if his clothes and the hair on his body would be singed away.

A loud roar sounded in his ears and his blood felt like it was boiling. And then a low rumble began to tremble the ground beneath his very knees. He pitched forward, catching himself on his hands so his face didn’t hit the ground and as he opened his eyes all he could see was pure white light. The field was illuminated to the point where nothing was visible, the roaring in his ears grew louder until his eardrums began to reverberate and as he pushed to his knees and off of his hands so he could cover them, an explosion ripped through the night.

Lance didn’t remember falling to the ground nor closing his eyes, but when he opened them he was staring up at the dark star-studded sky, and he blinked to clear his spotty vision. Ash rained down on his supine body and with a groan he pushed himself up into a sitting position, his hand already on the hilt of his sword as he looked around.

Silence prevailed and the whole field was empty. That’s when he realized that the ash was what was left of his dragon kin, their mates, Merlin, the witch, and the hunters.

He rolled over to his side. A low tortured groan rumbled up in his chest and left his mouth. He roared with grief and fury until there was no air left in his lungs and his stomach purged. When he’d finished vomiting, he rose to his feet, wiping his mouth with the back of his hand and shouted to the heavens. Tears rolled down his face but he didn’t wipe them away. He had lost everyone he cared about, including his flight pod brothers and his fated love.

How was he supposed to live when everyone else was dead? How could he go on without his flight pod brothers and his mate? How could he survive when his heart had been ripped apart?

All thought fled when a large, warm callused palm splayed across her belly. She gasped as her flesh goose bumped and her muscles began to soften. She shouldn’t be naked. She’d gone to bed in her sleepshirt. Hadn’t she?

The hand on her lower abs moved, lightly caressing her flesh, causing her to breathe faster and that wasn’t all. Her breasts felt fuller, almost heavy. Her areolae contracted, the soft skin became puckered, and her nipples hardened. Her clit began to throb and her pussy clenched with need, juices spilling from her cunt to coat her folds and inner thighs.

The mattress on either side of her dipped and then she whimpered as two hands cupped her aching breasts. Her breath hitched in her throat and she wasn’t sure she would ever remember how to breathe again. Not when those hands molded her breasts and then thumbs rasped over the sensitive peaks.

Her breath whooshed out when two other hands pressed high against her inner thighs and although her first instinct was to squeeze them closed tight, she didn’t want to. So she let them spread her legs wide and when two sets of fingers caressed each side of her mound, down over the lips of her pussy, she moaned.

A sob of intense joy left her mouth when her nipples were licked by warm wet tongues and then sucked into those hot moist caverns and suckled on firmly. When she felt a waft of warm damp air caress her mound, every muscle in her body tensed and then a cry escaped from between her parted lips as sensation swamped her.

Her back bowed, her pelvis lifting when the tip of a tongue laved over her clit and then she cried out as a thick finger rimmed her cunt and dipped into the creamy well. Hands shifted and arms moved. When she tried to move again she couldn’t and that was when she realized they were holding her down. Hunger warred with her mind for less than a second and then her body relaxed, accepting their power and dominance over her. Giving in to their restraint seemed to free her mind and body, the tautness diminished until she felt like she would never have the strength to move again. She’d never imagined that being under someone else’s control could be so freeing, or quiet her usually raucous tumultuous thoughts.

One of the mouths left her breast, licking and nibbling a path up to her own. She drew in a deep breath and then she was being kissed. Those soft warm lips were firm on hers and when a tongue swiped across the seam she opened with a sigh and without any hesitation.

The mouth sucking her nipple shifted from one to the other and the finger sliding in and out of her cunt sped up, going a little deeper each time it stroked back in. The tongue laving and lapping at her clit got faster and faster and the embers grew higher and higher until she was sure the fire would consume her.

The kiss was broken and she drew in a gasp of air as the pressure inside of her hovered on the edge of an explosion. Her body was coiled with hunger and a need so desperate she dug her nails into the palms of her hands as if trying to claw her way up to the pinnacle. She was so full of desire but that wasn’t all. She felt like there was a low hum of pent up energy trapped inside of her just waiting for a chance to get out. It was all so surreal but blissfully magnificent. Caly strained to reach the culmination, but no matter how hard she tried to fall over the cliff, she just hovered on the rim, as if stuck in some type of limbo.

Just as she thought she was about to topple over the edge they faded away and she cried out with frustration. Her body was throbbing with hunger and her muscles were quivering with unrequited lust. She curled into a ball and blinked back tears of frustration until the desire began to cool.

She frowned when she saw a small light in the distance and blinked, trying to dispel it when it came closer.

Calysta tensed her body, preparing to fight whatever was coming her way, but as the light came nearer and grew bigger, she squinted against the powerful glare. She couldn’t see anything through light so bright and pure. She’d never seen such a bright white light before and although she wasn’t afraid she was concerned.

And then the light diminished and she blinked with shock. Standing before her in an old fashioned gown of the most vibrant blue she’d ever seen was a most beautiful, dark-haired woman. Her face had the creamiest pale skin and yet she had tinges of pink in her cheeks. Her lips were so full they seemed to almost pout and when she smiled Calysta glimpsed white even teeth. 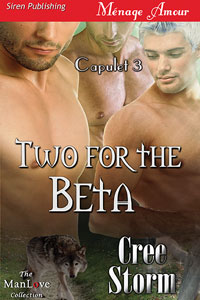