Holding Out For An Eros

The ancient and sun-kissed island of Santorini is just the place for Christa Moorman after her breakup with longtime boyfriend, Emil. She isn’t heartbroken. She just wants away from her job, New York, and him.

Long, lazy weeks lying on the beach soothe her soul and lull her into a peace that is upended by a chance encounter with an old man, a sexy statue of the god Eros, and its guardian. 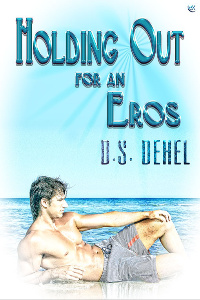 Holding Out For An Eros

“Archeologists working near Akrotiri have discovered the previously unknown remains of a temple dedicated to Eros. A large statue of the god is being slowly unearthed, and scientists believe it may make us rethink ideas regarding the worship of Eros.”

Interesting. Christa Moorman punched the channel button, shifting the station away from the English language program. But I need to practice Greek.

The car filled with the strains of an old Greek tune regularly heard in restaurants. She squinted into the glare of the bright Mediterranean sun. Negotiating the narrow, winding roads was difficult enough without being blinded by Apollo.

Blinded by Apollo. I’ve only been here just over a week, and I’m thinking in Greek-isms. Not that she knew how the people of the island thought—she spoke very little Greek, barely enough to get by. The translate function on her phone had become her best friend. Most people spoke English, but they usually only knew the basics. Conversations were difficult and nuance impossible.

The tiny aged Fiat growled into a lower gear as it climbed higher. It was a far cry from her shiny new sedan, but somehow, she doubted her car would fare as well on the rugged roads, plus it was definitely too wide for the narrow streets in town.

“Come on, baby.” She patted the dashboard. “You can do it.” Just in case, she shut off the so-called air conditioning and rolled down her window, letting in a furnace blast of heat, too hot for early June, even here.

A lorry came barreling around a curve, and she hit the brakes, the worn tires of her rental car struggling to find purchase on the rough surface.

“Holy shit.” Her heart pounded unpleasantly as the car slid to a stop, but she smiled and waved at the driver as the truck passed.

The first time she’d encountered a truck in such a fashion, she’d been sure she would die in a fiery crash, but she was getting used to it. Sort of. Regardless, the danger was worth it. The sun was worth it. The hassle of driving into Oia for groceries was worth it because she was spending three weeks on the splendid isle of Santorini.

The rental had been her best friend Angie’s idea, and time away from her demanding job as an editor was worth jumping through hoops to rent in a foreign country. Christa’s mother had been surprisingly encouraging. “Get away for a while.”

What she’d meant was that Christa should get away from her boyfriend, Emil. Make that her ex-boyfriend. Mom had a point. Emil had been her world for so long that she needed to refocus herself. They’d been together for so many years that she’d forgotten what it was like to be single. The weird thing was, she couldn’t really say why they’d broken up. Sure, they’d grown apart over the past year. Both had been so busy with their respective jobs that there never was time for each other.

One day early in May, he’d announced they were over, and stunned, she’d cried and begged and argued, but deep down, she knew he was right. After a week, she’d been okay with it.

Angie had suggested Greece, of all places, to keep Christa from being tempted by Emil into getting back together. Not that she wanted to.

She was enjoying herself too much. The airy cottage, if small, felt like home with its thick white plaster walls and tile floors. She spent hours in the sun on the terrace reading books that she didn’t have to fix and taking in the view of the ocean far below. Most days, she packed a lunch and went to one of the many beaches, where she continued reading and ignoring the rest of the world. Today she was on her way back from her favorite one, Eros beach, on the far end of the island.

Ugh. A love song. She switched the radio away from the romantic melody to a modern station and tried to lose herself in an unfamiliar but imminently likable Greek rap song. Not knowing the words, she made up her own. “Greece is so bright like ya like it. Hotter than Eros in heat. God wind stroking yo’ face on the beach.”

Her lyrics were terrible but no worse than some she’d heard on the radio before. I’m way too white for this. Eros in heat? Yeah, that’s the next Drake hit. Her laughter sounded loud in the empty car.

Around a curve, a black blob by the edge of the road caught her eye. Automatically she swerved…right into the path of an oncoming tour bus, so close that the driver’s black flat cap and scruffy beard were clear as day. “Shit. Shit. Shit. Shit.”

She yanked the steering wheel in the other direction. The bus driver, on the other hand, didn’t seem fazed. He didn’t even flip her off, like any respectable New York driver would’ve.

Shaking, she slowed the car to a halt, trying to gain control over her trembling hands. I hope that dog is grateful that I almost died for it or goat or whatever it is. She glanced in the rearview mirror.

The blob wasn’t a dog or a goat, but an old man.

“Oh, god.” She’d almost hit someone. Not really almost hit, but could have hit, if she’d not acted fast enough.

For his part, he didn’t seem to notice. Dressed in black pants and a black sweater over a faded plaid shirt, he was shuffling along, using a weathered cane for support.

Jesus, he must be eighty or ninety. Christa’s heart melted. She’d barely known her grandfather. There were only memories of being swept up into a hug that smelled of Old Spice and soap. And laughter. Her mom said that Christa’s laughter was like her Pop-pop’s.