Hope in a Bottle

Kylen is the prisoner of a sea-hag who tortures him daily to collect his tears. Desperate for escape, he sends out a message in a bottle.

When a handsome pirate answers his call, he’s captured by the sea-hag, and now Kylen has both their souls to worry about, but the pirate is more than he seems. 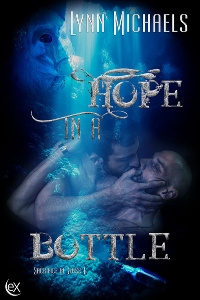 Hope in a Bottle

More From Sacrifice in Glass

Kylen walked on the beach, toes digging in the sand and squeaking as he neared the water’s edge. The bronzed skin on his feet contrasted sharply against the pristine white as he watched each step he took. He knew every inch of the beach since he’d walked it so often—the sand sifting in and out. It took away his sadness but not his tears. Never that. Those were reserved for the sea-hag.

He sighed and looked out over the water. The setting sun sent pink and purple streaks out in a hazy smudge over the sparkling waves. How could it be so beautiful when it made him so sad?

He couldn’t go too far. The bottle kept him ashore. He was tethered by the fine-spun chains draped around his head, enmeshed in his skin, and brushing against his neck. They were deceptively delicate, and they couldn’t be removed. The invisible connection psychically leashed him to his bottle and the island in a magical rather than physical way. He listened to the soft tinkling echoing around him in the evening air, his constant reminder. Trapped.

Kylen gripped the sand with his toes. What would he do if he could ever get free? Where would he go? He didn’t even know who he was or what kind of life could be possible.

He heard his name on the evening breeze. She was calling him. The tone sounded like a sweet summer song, but he knew the lie. She was evil to the core. Though he didn’t want to go to her, he had no choice.

“Kylen, come.” Her voice became as clear as the seagulls screeching overhead. He couldn’t help but tremble. She terrified him. He had to figure out some way to escape. He stepped into the water. The waves licked at his calves for a half a second before his body jerked backward.

He flew through the air and slammed into the side of the building the sea-hag called home and then through the exterior plaster and wood beams. The witch snatched him, pulling him to her and caring nothing of the pain as he crashed through any solid objects between them.

Kylen closed his eyes tightly. He hated the blur of the world, giving him vertigo, as his body answered her against his will. He only opened them when he stopped. Her cold fingers wrapped around his arm. Her nails pierced his skin with a painful pinch.

“Cry for me, little Kylen.” A thick tentacle slid around his neck, choking him. It stung his skin everywhere it touched—around his arms and legs. The suckers of each arm had tiny, serrated teeth. They pinched and sometimes bled him, but they weren’t the worst she could do. “Cry,” the hag demanded, shaking Kylen.

Fighting her was useless. She grabbed the chains around his head and jerked his head back. He sobbed out, despite wishing for anything else. He wanted to deny her, but tears ran down his face all the same.

The witch cackled and slid little glass bottles along his face. She would collect every last precious drop. “That’s my boy. Cry me a river, Kylen, just like your name. Kylen—the river.”

Her glowing eyes sat in two dark sockets. He tried desperately not to look at them for fear of losing himself in the depths of nothingness beyond. Instead, he focused on the flukes on either side of her face where cheekbones should have been. Around her scowling mouth, four appendages reached out and stretched down to her collar bones. She had all sorts of shells embedded in her skin just below them. Her hulking body was wrapped in gauze and some kind of seaweed or kelp. Her four tentacles were in constant motion around her body, but Kylen’s best guess was they extended from her hips and stomach, though it was hard to tell. Hard to look at or focus on them.

When she was finally satisfied with what she’d collected, she released him, and Kylen fell to the floor. He had little strength left to hold himself up.

“Are you going to cry some more?” She kicked his thigh. Her feet were bare, as always, but they hurt all the same.

“No, please.” His voice rasped as he spoke. “I’ve nothing left.”

“So be it. This was a good haul.” She cackled again, the sound sending chills down Kylen’s back.

He’d rest a moment, then head back to his room. Hopefully, someone would bring him food. They often forgot to feed him, but he felt so weak, he didn’t think he’d be able to make his way to the kitchens. His stomach growled. Maybe he would later. 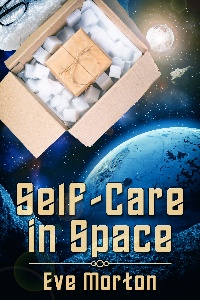 Self-Care in Space (LGBT)
Eve.Morton
In Shelf
$3.99
Tweets by
sirenbookstrand