I Dream of Zombies

What if the zombie plague careening through Australia was the result of a government conspiracy? One that goes all the way to the highest levels.

Seasoned Mission Specialist Julia Carter lost her mother and sister to the virus, and she's sure her stepfather is involved. The only question is how. When she's given a team to lead into Canberra to retrieve him and a passel of scientists, she's not happy.

Complications arise in the form of Damien Leroy, who arrives at Camp Queanbeyan running from the loss of his fiancée. He has secrets that could split apart the fragile networks between the existing camps.

But when the chips are down and there's a possible cure on the horizon, things will only get worse.

Content Warning: contains some graphic fight scenes, a couple who come together against great odds, and sexual content 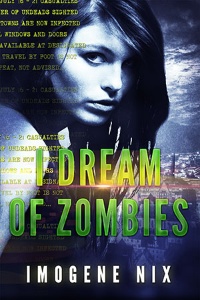 I Dream of Zombies

The woman the others called J was sitting at the table. In between terse answers to her team, she shot me hostile looks, and the rest of those assembled were sharing unsettled glances between themselves. If their actions were anything to go by, this wasn't the norm. She was the clearly established leader here and the one I needed to work with; otherwise it would be impossible to fulfill the role I'd agreed to play.

If she couldn't accept me, I'd need to move on, but I needed to replenish my stocks, which had become perilously low. It was an unwritten rule that in order to request provisions, you had to offer some kind of service, and this was the kind of thing I was best at. Killing and vermin eradication.

I wriggled my butt in the vinyl booth, holding the mug between my hands. Before the virus this had been a major hospital for the region, and the existing resources had been repurposed.

I didn't pretend to misunderstand her. I placed the mug on the scarred tabletop. "It's true that I'm itinerant. I don't like to stay in any one place too long. I'd rather do a month or two then move along."

The smile she shot at me didn't warm the ice in her gaze. "So you don't stay anywhere long enough to fit in. Yet I've been informed you're an ace sharpshooter with wicked skills and now you're to join our team."

Ahh, we were getting to the crux of the matter. She didn't want me to make a bad decision that would affect any of the members of the group. "Look. I've seen enough blood and zombies to fill a sea. I'm not looking to short-change anyone. I'm good at what I do and don't intend to see anyone in the group left behind."

"But when the chips are down—"

I'd heard this argument before too. "I don't leave people behind. If necessary, I ensure they won't reanimate."

Now the others at the table shifted uncomfortably.

The man nearest me cleared his throat. "You've done that before?"

"Yeah. A time or two." At the general sound of concern, I settled on a conciliatory tone. "I don't know anything about you." I pointed at the unknown woman. "I might have concerns of my own." I didn't, but she exuded such an air of disapproval that the words just slipped out.

"What?" The woman—J—surged up, her face a mask of anger.

This wasn't going well. I grunted, "Look, I don't know your name, how many zombies you've faced, or how long you've led this team. I don't know anything about you, yet you question me like I'm some kind of 'innocent'." Yeah, I couldn't resist the air quotes, and she loosed a strangled noise that I knew meant I'd jerked her chain, just a little. "You want to know about me? Well, turnabout's fair play."

The fury in her eyes flashed to a hot, heated emotion, which if I'd had to name it was in the region of hatred. Waves of rage licked at me, rolling off her like a tangible, scorching tsunami.

"Fine. The team calls me J. I've been leading them for just under a year, and yes, I've killed a lot of zombies. I couldn't count them."

"Great, J. Would you introduce me to the rest of your team?" I kept my voice mild. I really didn't want to needle her further, and clearly, she needed time to back down off the flare of temper she'd been surfing.

"This is Reg. He's married with two surviving children." She patted the hand of the man who'd held her back. "Dove here was a priest, and he's an awesome lookout and medic."

Dove was the close-cropped, dark-haired guy sitting closest to her. I wondered briefly about his name but knew now wasn't the time to ask.

"Van joined us when the train he was on was attacked. He lost his sister, mother, and brother that day." She pointed to the Eurasian guy who nodded. "Jack, who's sitting beside you, was in the army. He's our grunt and a damned fine tactician. He prefers the Steyr rifle."

"It's a hangover from my military days." Jack held out a hand, his pale blue eyes searching my face before giving the first genuine smile I'd received since arriving at Camp Queanbeyan.

"Hi." I gave him a small grin before turning back to J. "What's your story?"

Her lips thinned as tiny, white brackets appeared. "I don't have one." Now she rose. "We meet in the commander's office tomorrow at 0700. I have some details on the mission, but it's best to hear it and the rest of the intel from the commander."

With that the woman stalked from the room while I sat there, wondering how I could feel battered from such a short encounter.

"J has some issues. She lost most of her family in odd circumstances." Dove shrugged and pushed away from the table. "This isn't the way she normally is. She's good at her job, and a fair leader, willing to give everyone a chance. Just give her a go, okay?" He spoke quietly, every word measured, then turned and walked slowly away from the table.

Dove's words made me frown. If she was acting out of the norm, that might not bode well for whatever mission we were about to embark on. Given she had an issue with me at first sight, it was clear I needed to work with the others, to have them accept me.

Jack grinned at me. "Do you play poker?" 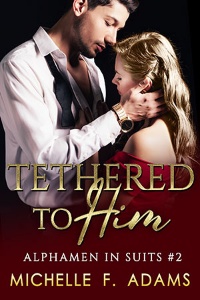 Tethered to Him
Michelle F. Adams
In Shelf
$2.99 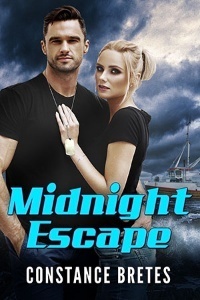 Blackmailed by the Mafia Boss (MF)
Sam Crescent
In Shelf
$3.99
Tweets by
sirenbookstrand