Nathan only ever wanted a normal life. But for him, life, family, and love are anything but normal.

On the other side of the Veil, dark and light fae exist outside the knowledge of most humans. Nathan Grier was born human, but his twin brother Jim is a changeling. On the run since they were children, time for both of them is running out.

Turning to fae hunter Sasha Kelly for help, Nathan must soon face his growing feelings for the other man while trying to save himself and his brother from a fate worse than death.

More From The Incubus Saga 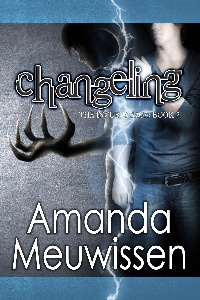 “Nathan, I couldn’t make you like me if you didn’t already even if I doused you in pheromones. It doesn’t work that way. This is just us. Just you and me. For all intents and purposes, right now I’m practically human.”

“No tricks,” Sasha said, moving in that much closer so he was practically speaking against Nathan’s lips. “Just ...”

Nathan didn’t realize his eyes were shut until Sasha's lips were on him. Half of him thought he had to be dreaming and that when he opened his eyes he would be alone. His senses told him differently.

Sasha’s lips were as soft as Nathan’s were chapped, and pliant, and giving. They enveloped Nathan like no lips ever had. A flicker of what Nathan had felt when Sasha shared the feeding experience with him stirred in Nathan's stomach, like an echo, and he found himself leaning in. Sasha was so warm. Even without his jacket, he radiated heat and that glorious smell of leather.

That's when it finally struck Nathan. Fae didn't have a scent -- not any that Nathan had ever met before—but Sasha did. And it was intoxicating.

Sasha’s lips were moving against his, and Nathan was moving his too, and their mouths were open just enough that the smallest tilt of Sasha’s head pushed the kiss deep enough to touch tongues. Nathan shivered, and shivered again when he felt Sasha’s hand at the curve of his face and neck -- gentle, guiding.

The kiss was lasting too long already. Nathan had to think quickly. He readied himself as much as he could and pulled away, smiling. “See,” he said, and his voice didn’t waver in the slightest. “Nothing. Sorry, man.”