Sometimes the last five yards are the hardest.

Quinn Maxwell is the starting center of the San Diego Kings professional football team, and his life seems to be falling into place. One day, the only person he tried to forget from his college football career, Rory Sinclair, walks back into his life and things are never the same.

With Rory as the new owner of the Kings, Quinn must choose between the game he loves and the man he loves. Things take an unexpected turn when an injury puts Quinn's life in jeopardy and his career on the rocks.

When Rory makes a tough decision, will Quinn ever be the same? 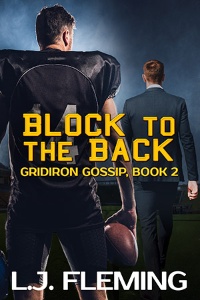 Olivia's was a hole-in-the-wall restaurant just off the main drag in the campus village that the college students frequented. Rory sat at a table in the back, scrolling through his phone and checking the time for the third time since he got there.

Maybe Maxie chickened out. He might be a big bad center, but that didn't mean he would show for the date.

Date? Why was Rory considering this a date? No matter the feelings he had about Quinn, Rory needed to make everything right. He needed to make amends. This was the only way they could continue to work through the season together. Rory shouldn't have asked him to keep this secret, but it was only for a few more months. Then Quinn could tell whomever he wanted.

"Sorry I'm late," Quinn said as he slid into the seat across from Rory. He had a big smile on his face, and Rory thought it was a strange look for someone who was mad at him.

Quinn's eyebrows shot up, and he folded his hands on the table. Rory wasn't fooling anyone with his Mr. Cool act. If Quinn didn't show, Rory would've been sick, because he disappointed the one person he trusted the most. The one person who always made sure he was safe during games. Quinn was an important part of his life, and Rory needed to admit it.

"I only came because I wanted to tell you that your secret is safe," Quinn said.