When it comes to celebrating the holidays, all the kinkiest shifters come to Kinky Kritters.

When shifters want to get kinky over the holidays, Kinky Kritters is the place to go. Trevor is a bat with a high pain tolerance and Sero is just the man to make him beg on Halloween night. Tom is tied up on Thanksgiving as an exhibit for patrons of the club to admire, but he'll need a guard to make sure people look but don't touch. Justin is up for the task, but there's more than just rope between them. Rudy gets the rack as a punishment over Christmas, and Thomas is just the man to make sure everyone knows just how sorry Rudy is for his mistakes. Jamison isn't happy about celebrating his birthday, and especially not because it's also Valentine's Day, but when his best friend hires an escort, Jamison finds himself quickly falling for Clyce.

These four stories tie into the Kinky Kritters series and have some crossover characters, but they can be read as standalones. 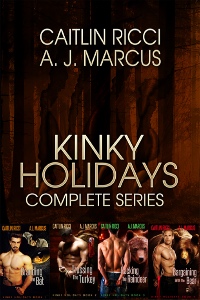 A bat with a high pain tolerance is the perfect prize for a cat with a sadistic streak, but this bat doesn’t want to play.

Sero just wants a drink, but on Halloween night at Kinky Kritters, a drink isn’t the only thing waiting for him. As a bat he’s a rarity—as someone with a high pain tolerance, he’s every man with a whip’s wet dream.
Trevor is just such a man, and he’s more than interested in Sero. Being turned down by the bat is a mild setback for him, but Trevor is persistent, and he wants Sero for himself.

Being tied up for Thanksgiving has never felt so good!

Most turkeys dislike being trussed, but Tom is one turkey shifter who actually enjoys being tied up. Tom’s a performance artist who’s been engaged for an exhibit at Kinky Kritters over the Thanksgiving holiday. He’s going to hang from the ceiling, naked and vulnerable, for the patrons’ voyeuristic pleasure. But he’s going to need someone to make sure no one touches the turkey, as well as keep him hydrated.
Justin isn’t sure he has what it takes to cut it as the newest member of Kinky Kritters’ security team. Antelopes may be alert and swift, but he’s neither big nor strong, and he wonders how much use he’ll be in a crisis. Lady Leo’s given him the task of guarding a naked turkey over Thanksgiving, and he’s doing his best, but this guy seems to resist him at every turn.
Sometimes being tied up can be a form of freedom...

This reindeer has agreed to be punished on Christmas Eve, but he’s in for more than he ever bargained for.

Rudy screwed up on Thanksgiving by giving out the security code to Kinky Kritters to a couple of humans. He put the club and the shifters in it at risk, and he has to pay for that. Lady Leo is ready to forgive him, as long as he submits to a public punishment to show everyone just how sorry he is.
Thomas is experienced in giving punishments. He used to work professionally for Critters on Call, but he’s left that life behind. When his old boss, Clyce, calls him for one last favor, Thomas agrees, but this is no simple task, and Rudy isn’t so easy to leave behind.

Bargaining with the Bear Book 4

Clyce is determined not to leave the escort business, and he might have finally met someone who won’t ask him to.

For Jamison’s fortieth birthday, his best friend has hired an escort for the night. Jamison is shocked, but Clyce is too sexy to be ignored and far too tempting to resist. A few short hours of fun is all that is supposed to be between them, but some Valentine’s Day fun is about to become a lot more complicated when their hearts get involved.