Life as a Teenage Vampire (MM)

The last thing Emery expected at the end of his senior year of high school was to become a vampire and fall in love with his best friend ...

Emery Mavus just wants to survive his senior year of high school. Becoming a vampire complicates things. So does a bizarre mentor, a group of vampire hunters, and an unexpected, new attraction for his openly gay best friend, Connor. An occasional uncontrollable hunger for blood might be the least of his worries. 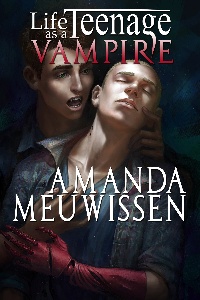 Life as a Teenage Vampire (MM)

Emery’s hazel eyes glowed with a shimmer like a cat caught in the light. Connor had tried calling his friend’s name but the words turned thick in his mouth until they trailed away. He couldn’t speak, couldn’t move. Emery’s hands came up so fast to press into the wall on either side of his head, he didn’t register the movement; they were just there. When Emery’s lips parted, Connor could see the fangs, long and sharp from his eyeteeth like right out of a monster movie.

It was a trick. Emery had made it all up, knowing that the details would lead Connor to vampires. These were just Halloween fangs! Connor wasn’t really hypnotized into submission; he was just stunned, believing his own crazy imagination. He’d longed for years to have Emery this close, after all, crowding him into a corner, lips descending. He’d just imagined them descending a little closer to his mouth, though his neck wouldn’t be so bad ...

... if not for the sharp sting, the breaking of the skin and rush of blood sucked out of him so fast he felt dizzy, and then -- wow.

It didn’t hurt at all. It felt like Emery was tucked into his shoulder intimately, fully aware of the pleasant buzzing he caused in Connor’s gut every time they touched. Connor had dreamed of this, imagined it just like this, and felt lulled by Emery’s body being so close, and the way he shivered feeling those lips on his skin. He almost thought he heard Emery’s soothing voice whispering affirmations he’d always wanted to hear.

The room was dimming, but he felt cozy where he was. His arms were limp and heavy as he lifted them to pull Emery closer, feeling the soft fabric of the sweater against his somewhat numb right palm. He pulled tighter, twisting flesh and plastic fingers alike in the fabric, pulling ... with the faint sense that he should be pushing instead.

“Em ...” he choked out like a whimper, like he was crying. Why was he crying? This was everything he’d ever wanted ...

Reality snapped back into painful, terrible focus when Emery released him, his fangs pulling from the tender skin of Connor’s neck, the brief feeling of a tongue licking over the wound, and then Emery jerked away from Connor with a harsh intake of breath.

Emery’s hands had moved at some point from the wall to Connor’s shoulders, and the second he removed them, Connor dropped straight to the carpet.

Even blinking felt sluggish, like the world was moving in slow motion. Connor felt drugged and weak, still hazy, but the pain wasn’t dulled anymore; he felt that distinctly, and said with clear accusation when Emery’s face swam into view, “Ow.”

“Oh God, Connor, I’m so sorry! I didn’t mean to. I couldn’t stop.” Emery ranted on and on a series of apologies and assurances that he hadn’t meant to do that -- as if Connor would ever think otherwise.

Connor waved his right hand ineffectually until his friend grasped it. It was the hypnotism, the glamour, whatever it was called, not the blood loss. It couldn’t have been that much blood. He just needed a minute for his head to clear.

He slurred out something that he hoped conveyed that, and leaned against the wall at his back. At least he hadn’t crumbled completely. He was in a sitting position, with Emery crouched, soon sitting in front of him, still holding his hand. Connor figured he could enjoy that longer than usual given the situation.

He stared ahead at Emery, waiting for the image to stop swirling, and as soon as he saw Emery’s eyes give an extended blink, squeezing tight to stay tears, the spell broke. Connor coughed and shook his head. His head throbbed, the wound -- bite -- on his neck stung, and his rear was a little sore from falling, but he only felt mildly dizzy, like after giving blood to the Red Cross.

Connor squeezed Emery’s hand as tight as he could to show he was okay, he just didn’t feel like moving yet. “That actually didn’t suck as much as you think,” he said, though he had no plans to elaborate on how good some of it had felt. “Believe me now?”

An Act of Generosity (MM)
Sharon Maria Bidwell
In Shelf
$3.99 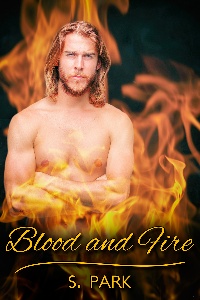