The world’s first tourist space cruise launches from the International Spaceport in White Rock, British Columbia, on New Year’s Eve. One hundred free cruise tickets are hidden all over North America. You have three days left to find one. Would you...

Break and enter? Risk a billion-dollar inheritance? Betray the love of your life?

It’s a random universe. While millions around the globe celebrate the Quicksilver spaceliner’s impending launch, a handful of our heroes struggle to achieve their stellar dreams.

One of them is a methane heiress desperate for a free ticket. Another is a newscaster digging for a killer scoop. And another is a veteran astronaut who’s never been in space.

There are more. Tween twins attempt a secret mission, a star is almost born, and everyone is trying to get to the launch before the Quicksilver—you know—launches.

A lot can happen in a random universe. Do-gooders become saboteurs, cowards muster courage, and loners find love. Who will crash and who will soar? The clock is counting down to one moment that will change everything: Lift-Off! 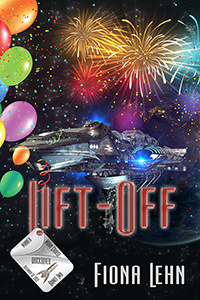 “Some people believe that space is humanity’s destiny,” Mercury said, leaning ever closer to Kembly’s handheld microphone, “the next in a line of horizons that never ends.”

“Dammit!” Zoom leafed through the tech modules hanging from his belt and cranked up the compression ratio on Kembly’s handheld. “Kembly.” Zoom spoke into the microphone that connected to her earcomm, “Kembly, if Mercury eats any more of that mic, the audio will distort and Station Manager will reassign us to Cartoon Hour. Back him off!”

Up on the News10 location stage, several yards from where Zoom stood with camera rolling, Kembly inched her handheld away from Mercury. “Subtle,” Zoom said. “Nice work.”

Unfortunately, Mercury’s mouth followed. “Others maintain that space is a pipe dream, future music, abandonment of the home world, or a financial black hole.”

Zoom cursed and re-adjusted the compressor settings. Though lacking in mic technique, the guy sure knew how to work a crowd. Kandy Kembly, a veteran newscaster who could command the undivided attention of a two-year-old for hours, had dwindled to mere eye candy in this interview, while Mercury posed, poised like a superhero on the News10 stage—hands on hips, chin raised, gaze sweeping the sky above Semiahmoo Bay. His shoulder muscles rippled under the thin fabric of his t-shirt—who wore a t-shirt in December in Canada? And it was at least two sizes too small, probably on purpose. “All this guy needs is a cape,” Zoom muttered. “I’ll be wiping blobs of charisma off Kembly’s handheld for days after this.”

“Cut to aerial,” the station crew chief’s voice crackled in Zoom’s earcomm, “in three, two, one.” The station crew cut from Zoom’s live feed to the News10 drone-cam hovering above him, bird’s-eyeing the audience and the stage at the north end of the pier, or what used to be a pier. Widened, reinforced, and extended, the hundred-year-old promenade now served as the primary thoroughfare from the mainland to the International Spaceport nearly three miles offshore.

The drone skittered fifteen-hundred feet south along the old structure to the point where the pier extension jutted southwest and the no-fly zone began. It then veered to the western rim of the bay and lingered there, buffeted by the wind coming off the Georgia Straight, vying for a clear distance shot of the spaceport’s bulbous domes and flat launch pads, which never failed to remind Zoom of a giant water hyacinth.

“Some see romance in the stars,” Mercury said, as voice-over. “Some see a welcome release.”

When the station crew cut back to Zoom’s live feed, he was capturing Mercury’s chiseled cheekbones and sun-burnished visage in a tight close-up. Slowly, Zoom widened the frame until it again included Kembly and a background of cerulean sky.

“I say venturing into space is the greatest manifestation of the human spirit yet, and I can prove it.” Mercury stamped his foot dramatically, and the portable stage shuddered. “I will prove it—in three days, at midnight UTC, on New Year’s Eve!”

“We’re about out of time,” said Kembly, regaining control of the handheld. “Could you briefly tell us why you decided to launch that day?”

“Love to.” Mercury smiled. “The New Year has long symbolized rebirth, a chance to start again, to live a better life. My space cruise leads us into a new, enriched era of unification, here on Earth and in our entire universe.”

Fans cheered and pressed against the temporary fencing at the foot of the stage.

“Thank you for your time today, Mr. Mercury,” Kembly said. “You must be incredibly busy, preparing for the imminent launch of the Quicksilver.”

“Aces. Wrap it up.” Zoom directed via her earcomm. “I’m panning away in ten.”

When Kembly reached out to shake, Mercury tugged her glove off, bowed, and brushed a kiss across the back of her hand, all in one fluid movement. He was some smooth operator.

“...three, two, one—adverts are rolling, and I am puking,” Zoom said into Kembly’s earcomm. “He kissed your hand?” And Mercury was still holding it. The guy had confidence in spades.

Mercury drew close to Kembly and whispered, “If you need anything more, please don’t hesitate to ask. I will move mountains to make myself available to you.”

Although Kembly had switched off her handheld mic, Zoom caught it all, loud and clear, via her earcomm.

She nodded. Mercury released both hand and glove and descended the back stage steps with the grace of a jungle cat.

“What was that?” Zoom asked. “You suppose he’s your ticket onto the Quicksilver?”

“Jealous of what? Not everyone is after your body, Kembly.” Sure, he’d asked her out when they first started working together last year, but he had been a starstruck neophyte then. Her radiant copper-colored skin and her long wavy black hair had spellbound him at first. Not anymore. “Mercury’s ex-military,” said Zoom, “did five tours on bomb squad, he’s divorced, probably abuses alcohol or, I don’t know, chimps—”

“He’s from a poor village in Mexico,” Kembly countered, “a single father of two who has, before the age of forty, made his dreams—and millions of others’ dreams—come true. What a bad guy.”