Malcom Cho is in over his head, wrapped up in a love affair with his superhero nemesis Zeus, who most people in Olympus City only know as Detective Danny Grant.

Lovesick Titans begins where Lovesick Gods left off, after a heist gone wrong that ended with a museum guard dead and Mal and Danny beaten and exhausted from their fight with the new threat in town, Cassidy Ludgate -- Hades. Unaware that Ludgate’s true motivation is revenge for the death of his father at Zeus’s hands, Mal wants only to keep Danny close, while Danny races to solve the cases surrounding Ludgate to stop him from whatever he has planned for them next.

What Mal doesn’t know is that Danny didn’t pursue him with the purest of intentions but sought to break his heart in retaliation for not being there when he needed him in the fight against Thanatos. Even though Danny no longer seeks that end, the lies between them loom like a shadow about to descend upon them both. And Hades has only begun to toy with them ... 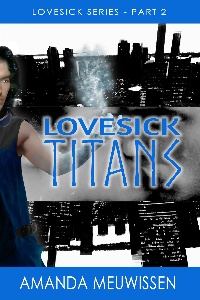 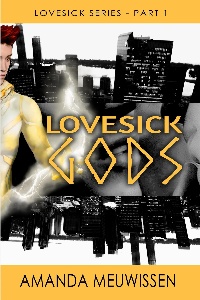 Danny let Mal hold his hand in place on his arm, while his other hand strayed, drifting down to Mal’s hip and resting at the edge of one of his larger scars. Mal had many, from years of abuse and a hard way of living. Normally, when Danny touched one, he pushed on with confidence, but tonight, the raised scar tissue made him snap to his senses like he’d been in a trance.

“Sorry,” he said and pulled both hands away.

But Mal reached for them, hung onto them, and brought Danny’s hands back to his skin. “It’s okay. Broken bottle one night when Dad got drunk. Now I get to add another knife wound to the collection.” Mal smirked as he nodded at his bandaged arm.

Danny smiled with him, but it was a sad, shattered expression. He teased the tips of his fingers over the scar tissue. “Are all these really from ...” With a startle, he tried to pull away again as if he’d said something he shouldn’t.

“My father?” Mal said, refusing to let him go. “Not all. Most though. Some are from prison. Some dumb mistakes. Fights like tonight. But most ... yeah, they’re his.”

Taking Danny’s hand still resting on his hip, Mal drew it upwards, guiding it across his bare chest until he reached his shoulder and the faint circular scar tissue near his clavicle.

“Freezer burn. From his powers. Because I broke my leg when I was eight and I cried. He wanted to teach me a lesson. Teach me how to keep pain in and never let anyone see it. So he held the tip of a frozen finger there until it burned.”

Mal trailed the hand lower to a particularly bad scar across his stomach -- his worst and the one he remembered the clearest. “First knife wound. Caught me with a boy in my room. Would have killed him if I hadn’t stood in the way. I took the brunt of it. Let him run off. Never brought a boy home again, not ‘til Dad was gone. Brought a couple girls home,” he shrugged.

“Girls?” Danny asked with a touch of humored skepticism bleeding through his concern. He splayed his hand flat against Mal’s stomach, warm and intimate in his touch.

“Occasionally. Not as often.”

Danny nodded but his smile quickly faded, his eyes trained on the scar and the affectionate way he traced it with his fingers. “Sometimes ... I think my dad hates me because ...” He trailed and the motion of his hand slowed. “There’s something I never told you. About the night I killed Thanatos.”

The smile dropped from Mal’s lips as well as he waited for Danny to continue.