Charlotte loves animals. She's dedicated her life to looking after them. When her friend and vet gifts her a kitty who came in after someone rescued him from poor living conditions, Charlotte knows she's found her forever animal. But someone doesn't want her to have the feline, who she's now christened Lucky.

Max has been trying to get Charlotte's attention for years, but she's so wrapped up in all the animals. He thinks giving her a cat as a present might win her over, only to realize that Lucky came from an unscrupulous couple who were breeding animals for profit, and now they're about to be arrested, they want to make their animals disappear. Including the police's expert witness, the one who was given Lucky ... 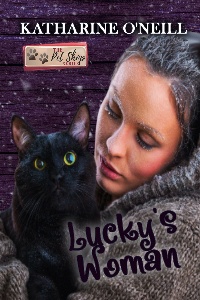 Max got his gym bag and started putting in his personal protection equipment into it, along with a few items he had a feeling they would need. Shortly after Alex and Jimmy had gotten married, Alex had set up a small surgery at the ranch. He surmised it would be easier to use it for the animals Jimmy had at his place instead of going to and fro from the surgery in town. And Jimmy did have a huge amount of space, perfect for five dozen animals with possible life-threatening illness and health ailments.

He didn’t know what he was going to meet, but Max was sure it wasn’t going to be great.

Alex was already out in the car when Max locked up the surgery and hurried to get into the car, putting his mask on as he opened the door. Even with the coronavirus restrictions having lifted so everything was very nearly back to normal, they were still advised to wear masks in the car if they weren’t part of the same bubble. Max wasn’t keen on them, especially when the weather was much warmer and it made him sweat, but he wasn’t about to argue. The one time he didn’t wear one, he was getting fined. That would be just his luck.

The two men were silent as they headed out of Everett to Jimmy’s horse ranch. Already, the driveway was nearly swamped with several police vans. Police officers were going to and from the largest barn with multiple carriers. Max could hear the barking and meowing with the windows up.

Alex pulled up behind Richard’s car and got out. Max did as well, adjusting the hold on his bag. He could see into the barn, and the carriers lined up almost the whole length of the barn. Giving pets check-ups wasn’t a problem, but Max had never done this many in such a short space of time.

He had a feeling this was going to take a long time before they knew if the dogs and cats were going to recover.

Then Max saw Charlotte. She was standing just off to the side of the barn, looking at the carriers with a pained look on her face. From what Max could see of her with her mask on, she looked exhausted. In pain.

And wet. Very wet. Her clothes were soaked. What on earth had she been up to?

Aware that his pulse was picking up the pace, Max squared his shoulders and approached her. Why did he feel like this with Charlotte? He was nervous around women, always had been, but there was something about his partner’s sister that was different. It was more…intense was the only word Max could describe it as.

Alex had told him before to stop being such a wimp and go for it. The problem was, the one time Max actually got the courage to ask Charlotte out, someone had gotten there before him. Now he was stuck seeing the woman he had fallen in love with being with someone else. Five years on, and they were still going strong. Max couldn’t compete with that, even if Harry was a scumbag who sneered at everyone, thinking he was better than them. Charlotte seemed to like it, although Max had never figured out why.

Charlotte didn’t look around as Max approached until he was almost right beside her. She turned and looked up at him with those big hazel eyes that had sucked Max in the first time he saw them.

“He’s gone to look for Jimmy and to set the surgery up.”

Max looked at Charlotte’s front, trying not to stare at her breasts. The wet clothes were moulding around them very nicely, and Max could feel the first stirrings of arousal, which he shoved aside. Now was not the time to get an erection in front of everyone.

“What happened to you?”

“What? Oh.” Charlotte looked down at herself. “I got doused by a pressure washer.”

“You look more than a bit doused.”