Unlike other millennials who made it big in the tech world, Joshua Jones, aka J.J., sold his lucrative software business at age thirty, electing instead to tackle his bucket list while he was still able. An impromptu twilight sail to a quaint island fishing village in Swedish waters led to his chance meeting with Lucas—an Adonis-like LA lawyer visiting his maternal grandparents. After sharing a whirlwind forty-eight passionate hours together before Lucas’s return to the states, they both knew they wanted more. An unfortunate experience white water rafting on the Zambezi River robbed J.J. of his burner phone—his only link to Lucas, a continent away. Years passed, but J.J. never stopped looking. He’d find Lucas no matter what, even if he had to go around the world to do it. 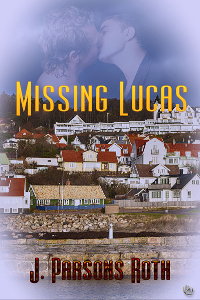 I can still see him now—Lucas. It’s been nearly ten years, but the memory lingers, fresh even after all this time. It was summertime in Denmark, where twilight quickly turns to dawn at that time of year. I was on the Baltic off the coast of Copenhagen with my friend, Christian, and his striking fiancée, Liva. I was a weekend houseguest residing on the floor of their tiny apartment. Housing even then was expensive in Copenhagen, and in spite of his profession as an architect, a second bedroom was not an option. With conversation ebbing in the early morning hours, it was nearing two AM when Christian suggested we go sailing.

Christian’s boat turned out to be a magnificent sloop, which must have been at least sixty-five feet long. It was, I surmised, a substitute for that second bedroom. Once well out of the harbor, the glimmering white sails were lowered and we struck out downwind beneath a glorious, billowing, blue jib. The waxing moon glistened on the open water.

Maybe time has warped that memory, but I clearly recall sitting forward on the bow watching the vessel cut through the water with the crisp sound of a sharp knife slicing into an apple. A worshiper of daylight hours, I was elated to witness the official sunrise at four thirty-two AM.

I watched intently as we approached the harbor of a tiny island fishing village—Churchill—in Swedish waters, I believe. Lucas greeted us with a friendly smile, and helped me position some fenders and tie the boat securely to the pilings. After an exchange of pleasantries, my hosts excused themselves to visit an aging friend while Lucas and I remained behind.

I was glad to be abandoned in the company of someone I judged to be about my age, and handsome to boot. His hair was blond and wavy, ruffled in the morning breeze. His eyes were the bluest eyes I had ever seen. He was shirtless, wearing only a pair of knee-length khaki shorts.

“Sorry, I didn’t mean to be rude. My name’s Lucas.” Those were the first words I distinctly remember him saying. That and his enduring, firm handshake etched indelibly in my memory.

“Joshua Jones,” I responded as I admired the Adonis-like stranger still gripping my hand. “But since birth it’s always been J.J.—I’m not sure I recognize my given name any longer.”

Lucas turned and began walking down the dock with me closely on his heels. At the end of the dock he grabbed a pair of sandals from the hull of a nearby boat, along with a tie-dyed t-shirt bearing an illegible logo, which he pulled over his head as we walked. He inquired about our trip over. We both commented on the promise of a perfect day, and there was other unimportant chatter that I no longer recall.

He found a spot on a high grassy hillside and we sat watching the sun continue its ascent over the Baltic. Churchill was quaint, though I saw little of the small village that day. It was aptly named, as I soon discovered. To our backs was an ancient cemetery in the shadow of a small but imposing country church that sat squarely on the crest of the hill. The weathered headstones and gnarled tree branches, the product of a harsh climate, were truly fitting for the subject of an artist’s canvas on the bright, balmy day of my visit.

“Hope you don’t mind, I told Christian I’d make sure you got fed today,” Lucas said, pointing to a lunch pail resting in the shade of a bush. “He and Liva usually stay most of the day when they come to the island. My grandmother packed my lunch—thinks she’s feeding a couple people, so there’s always plenty to share.”

“Thanks,” I said, turning my head to get a glimpse of the little hamlet over my shoulder. “But I’m a bit confused. You knew I was coming?”

“Christian told me something last time they were here. Their friend they visit has early dementia. Christian thought you would rather be with me or off on your own. Guess he never mentioned anything to you.”

“No, but that’s okay.” I paused to catch my breath and, frankly, to study his features in the way the absence of conversation allows. “I’m curious. What’s it like growing up in a place as beautiful as this? It’s so small and isolated. And where were you educated? I can’t imagine Churchill’s schools could teach someone to speak English so perfectly.”

He began to laugh. “I’m American. Born there. Graduate of Stanford Law, although I learned my English before I got to law school,” he quipped with a mischievous grin. “You’re stereotyping based on my Nordic image,” he teased as he began to chuckle.

“I was almost certain you were some Nordic God at first glance,” I snapped back, trying to camouflage my embarrassment. “Those strong features—thought you had been banished to this little paradise in exile after foolishly angering Odin…besides, you don’t look old enough to be out of law school.”

“I’m twenty-eight—and you know I was only joking about the stereotyping.”

“Got you by two years.” I paused. “And with that superb command of the language, I bet you actually practice law somewhere?” He returned my grin and we both began to laugh.

Beneath the surface of all that banter, it was electric. I knew it was there for both of us. It was a feeling I’d experienced only one time previously in my thirty years, discounting, of course, one nearly forgotten elementary schoolyard crush.

“Yeah, I’ve been with an LA firm since getting out of Stanford. No point telling you the name, it seems there are a zillion lawyers in LA and you’d never remember it anyhow. But what about you? Christian told me you’re checking off your bucket list, don’t want to be terminal and discover you missed something.”