Reese King may be stuck in a rut, overworking herself teaching entry-level Biology labs at a local college. When one particular student shows up in her class, though, she’s thrown for more than a loop. She hasn’t been attracted to a student before, but she knows she’ll never give in to the temptation.

When Max Logan enrolls in classes at a small college far from his elitist family’s reach, he’s floundering for another purpose in life. After heartbreak and a debilitating accident, he’s lost his dream of an Air Force career. So now what is he supposed to do? Drinking and sleeping around is getting him nowhere fast, and he vows to change. No more alcohol, no more women. Never again will he seek a long-term relationship, either.

However, attraction doesn’t lie, and Reese and Max face the challenge of the student-teacher boundary. Friendship comes next, but after that? Never say never… 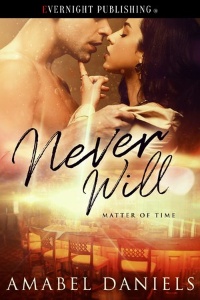 More From Matter of Time

She frowned, looking anywhere but at him. “In general, or…?”

Rosiness painted her cheeks. He watched her chest rise and fall faster.

“It’s a simple question.” He reached onto the couch, putting his weight on his hands, and crawled toward her.

She licked her lips, and he tracked the move. Staring into her eyes, he felt the corner of his mouth kick up. She was nervous, not out of fright, but maybe … excitement.

There was no going back. Their locked stares exposed too much, told too many truths.

She wanted him as much as he did her. It was past time he stopped pretending this connection didn’t exist.

Time to turn the tables on this teacher.

“What do you want?” he murmured, stalking toward her until he held himself over her petite frame.

“Is this a…” She swallowed hard. “A short-answer kind of question, or…” Panting, she gazed up at him. Her fingers flexed in and out of fists, like she yearned for grounding.

“True of false,” he said. “You like this.” He slowly lowered to her mouth. Waiting for a moment, feeling the teasing whisper of her hot breaths against his lips, he kept his gaze on her. He brushed his lips to hers, softly, then licked and dove in for more. She grunted and fisted his t-shirt. As he pulled up, she yanked the garment halfway up his torso.

“True,” she whispered, wanton mischief glittering in her eyes.

Goddamn, is she gorgeous.

“Multiple choice,” he said at the corner of her lips, ghosting a kiss there. “Do you want me to touch you, a, here?” Slanting to one elbow, he rested on top of her and brought his hand up to cradle the side of her neck. “B, there.” He slid his hand down to trace the side of her breast.

She gasped and stole a kiss, arching into him.

Hell, I’m not this patient.

“Or c, over here.” He dragged his hand down to cup her pussy.

She moaned, thrusting into his touch. “D. All of the above.”

Claiming another kiss, he pressed his erection against her core. Pain pricked when her nails scored his back. He leaned up enough to let her take his shirt off.

“Fast or slow?” he asked, snaking his hand beneath her, slipping under her shirt.

He chuckled as she peppered kisses along his jaw.

“Gentle,” he said, rocking against her. She kissed him.

She bit his lower lip. He growled as she sucked it, soothing the pain.

“This is fucking insane.” He silenced his need, devouring her lips. Shoving her shirt up to cup her breast, he swallowed her groans. Her mewls vibrated from her throat as he left a trail of wet kisses toward her breasts. He slid his finger along the edge of her bra and tugged the cup down.

“Max!” She cried out as he sucked her nipple into his mouth. His hips thrust into hers when she wrapped a leg around his waist.

“Tell me to stop,” he said after he licked her nipple.

Shivers spread across her skin and she framed his head, clutching him to her breast. “Don’t you dare stop.”