Erik is the Alpha of a small happy pack. One night whilst negotiating a treaty, an omega is dragged into the room.

Erik is stunned by his beauty, his scent, and immediately fills with desire to protect the little omega, keep him safe and make him smile.

Buying the omega is the easy part. Getting the scared and damaged omega to trust him is going to be hard. Especially when Erik accidentally triggers Luca’s heat on their very first night.

Luca is a hated half breed. His father a human mage. His mother a captured shifter.

Luca longs to be human and no longer despised. He knows nothing of shifters, or omegas and alphas. Luca believes he is imprisoned by animals who want him dead. He has no idea why he is suddenly full of unbearable arousal and he has no idea what to do about it. 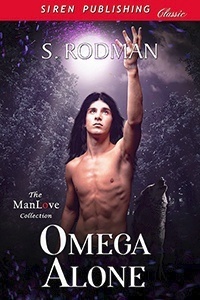 “I was scared of you!” I shouted practically in his face.

Erik looked as if I’d slapped him with a dead fish or something as equally unexpected, shocking, and unpleasant. I watched various emotions flow over his face as he tried to process what I had said.

“But...but, you are an omega. I would never hurt you,” he said quietly, seemingly completely bewildered.

I sighed. “What is an omega? People keep using that word, and I don’t know what it means.” Anger and annoyance were clear in my voice. I was living dangerously.

Erik looked at me as if I had suddenly sprouted three heads and some wings.

“What?” he asked incredulously.

“What. Is. An. Omega?” I repeated each word separately, enunciating clearly as if speaking to a drunk person. I obviously had a death wish.

Erik just stared at me, blue eyes wide. Eventually, he tried to speak. “An omega is an...omega,” he said helpfully.

“What did they call them in your birth pack?” Erik asked. I just stared back at him, waiting for him to realize how stupid that question was. Unease coiled around me. He had said birth pack. He couldn’t think I was a proper shifter? I was obviously a half-breed. Even if he was that dumb, the whole pack had been at my throat, one of them would have realized. Surely they couldn’t all have mistaken me for a proper shifter, and that was why I was still alive?

“An omega is a submissive,” he said as if trying to recall a dictionary definition.

“Charming,” I snapped. “What if I don’t want to be a submissive?”

He blinked at me again, looking completely bewildered.

“It's how you are born. It’s not something you can choose,” he said, sounding so confused I nearly felt sorry for him. Instead, I raised an eyebrow and crossed my arms.

He flushed at my words.

“It’s not like that,” he mumbled. “It’s like being born a shifter or a human.” He tried to explain, except it was a terrible analogy. I was a half-breed. Neither human nor shifter.

“Alphas are stronger, faster, more dominant. Quick to aggression. Omegas are calmer, more gentle, nurturing, the peacekeepers of the pack. How can you not know this?” he said, his mood shifting to exasperated.

I glared at him. Shifters were secretive. It's not like I could have Googled shifter society without getting a load of nonsense. Maybe he did really think I was a proper shifter? That was not a good thought.

“And it’s about sex drive,” he continued. “Alphas are driven by the hormones to fuck and claim. Omegas want to be fucked. They give off pheromones. You must know that’s why everyone wants to have you?” He asked as if checking I knew the sky was blue.

I thought about telling him he was the first person who had ever wanted me. Skaldi certainly hadn’t. But that thought hurt and was embarrassing. So I said nothing.

His blue eyes narrowed, regarding me suspiciously. He knew I was hiding something but couldn’t figure out what.

I was suddenly annoyed that he thought everyone wanted me. Like I was some sort of sex kitten. If only I were that popular, how different my life might have been.

“So if you are an Alpha and I’m an omega, does that mean you want to take me right now?” I asked bitingly, showing him how stupid he was.

To my surprise, his eyes suddenly glowed with a feral hunger.

“Yes,” he growled softly, with a naked need that sent a shiver down my spine. I may have given a little squeak and tried to get away.

He ran his gaze all over my body and licked his lips. I squirmed. The intensity of his attention was overwhelming and apparently arousing as my cock sprung to life.

I swallowed, head spinning from the rapid change from arguing to...this, sudden lust? Was that even a thing? I guessed so as my eyes were drawn to the huge bulge in his jeans, and my body remembered the feel of it inside of me and gave a happy little quiver.

“I’m going to fuck you and claim you, so no one else will dare touch you,” he stated in a low voice that rumbled through me. His hands on my shoulders tightened possessively, and it made my knees go weak.

Part of me wanted this so very much. To be owned, possessed, protected. To be someone worth protecting, for someone to want me so much that they couldn't stand the thought of anyone else touching me.

The rational part of me knew that he just didn’t want me stirring up trouble in his pack. But in this moment, irrational me was far stronger, and I just wanted. Wanted with a need and a passion that alarmed me with its intensity.

A strange whining noise came out of my throat. I couldn't think straight, couldn't think at all. I just wanted. Wanted with every fiber of my being, but I didn't know what it was I was longing for.

I whined again, a noise of frustration and confusion.

Erik rumbled happily again and removed his mouth from my neck. "Spread your legs." He breathed huskily.

Fear fought through my soporific daze like a spear through fog, and I clenched my knees tightly together.

Erik growled in annoyance. “You let vampires fuck you happily enough. Why not your own kind?”

I figured he wouldn't give a shit about any of that anyway, so I said nothing. I wasn't entirely certain I was with it enough to be able to string a sentence together anyway.

I risked meeting his eyes in case there was any way I could communicate anything about the fact I wasn't trying to piss him off on purpose.

His blue eyes blazed fiercely and pierced me with their intensity.

“Spread your legs,” he said again. He was utterly resolute. He had given an order and would be obeyed.

I swallowed nervously, unable to free myself from his stare as I slowly, inexorably spread my legs for him.

His eyes glittered with satisfaction. He removed one of his hands from holding my wrists above my head, easily able to hold me still with one hand, and reached down, catching my nightgown and sliding it up my legs.

I slammed my eyes shut as it slipped over my hips, baring me to the predator above me. His hand slid down my naked leg and back up, trailing along the inside of my thigh until he reached between my legs. I took in a big shuddering gasp of air, a tangled mix of anticipation and unease.

He touched my hole, and I squealed, trying to recoil away. I hadn’t expected it to be so sensitive down there, to be able to feel him touching me in so much detail.

He whirled his finger around my hole, and it felt good, sending a tingling sensation along my spine. The wanting feeling intensified, drowning out everything else, rolling through me in waves. I dimly realized I was moaning and rocking my hips against his touch, feeling as if my whole body was on fire. He slowly pushed a finger inside me, and I bucked, arching my back and making an animalistic groan.

Yes! cried the wanting feeling overwhelming me. Yes, this is what it wanted, what I wanted. What I needed.

I writhed and moaned in sheer pleasure as he moved his finger in and out. Then there was a warm wetness that felt divine. Lube? I wondered where that had come from, but then I lost all thoughts as he added a second finger. I cried out, clutching the sheets. Erik had let go of my wrists at some point.

He removed his fingers, and my hole felt wet, open, and empty. I whined and blindly reached for him, pulling him toward me while lifting my hips.

I had a hold of his muscled arms, so hot against my skin. Something pushed against my hole, something huge that felt like silk and steel at the same time. It pushed more, and my hole burned and stung. I hissed and let out a little whimper.

Erik grunted in my ear. “You can take me,” he said. “Hardly your first time.” I was too distracted to be insulted that he thought I was a slut.

Slowly, determinedly, his huge cock stretched me, sinking deeper and deeper until I was impaled. The sensation was all consuming. I gasped.

I felt so full. His huge cock, hot and deep, deep inside me. My hole stretched impossibly wide. I grunted, rocking my hips. Erik groaned, moving his hips a little so his cock slid a little way out of me and then back in. I cried out and dug my nails into his shoulders. Oh, that felt incredible. So very, very good. He did it again, and I wrapped my legs around his hips. The noise of appreciation Erik made nearly had me coming right then and there. I felt myself clench around his cock, and he cried out.

And then he thrust, really thrust, and he was fucking me hard. Slamming into me. In and out, I screamed as the sensations possessed me, and then I was coming and spilling, and he kept thrusting and hammering into me, and the pleasure didn’t stop.

My throat hurt, but I couldn’t stop screaming my pleasure. It was too big to stay inside my body. It needed a release.

I thought I couldn't take any more, but Erik kept giving me more, exploding my body with pleasure. I lost all awareness of who I was. I existed only in this storm of lust and need.

My head lolled on his shoulder

“Hey,” Erik said with a deep chuckle that vibrated through my body. “I’m not that good,” he added.

His hand went to my spent cock and stroked it back to life. It responded quickly and eagerly, and I whimpered, rocking my hips. Erik made a low moan, and my body clenched around his cock.

The Last Temptation of Eve (MMF)
Xondra Day
In Shelf
$4.99