Out with the Old (MM)

All Trey Braddock wants is to celebrate his best friend’s wedding. His Christmas list does not include wait staff dressed as reindeer, nor a tipsy bride with tinsel on her train. Certainly he never asked for Sandy Hackford, the high school jock who, eight years ago, walked off with Trey’s heart.

But it is, after all, the holidays: a time for friends, family, and giving thanks. Sure, there will be horrible toasts, an awkward dance or two, his first crush in a three-piece suit ... Trey has it handled. He’s made a career out of ignoring Sandy. It’ll be a piece of precariously balanced wedding cake.

Except Sandy is no longer ignoring him. No matter the holiday, though, this is no time for forgiveness, and Trey isn’t ready to pardon the thief of his first kiss ... even if it means there will be another. 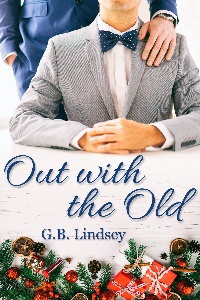 Out with the Old (MM)

It’s eight. Out in the main room, the toasts are winding down. Amanda-Claire and Greg are plastered side to side in front of the empty cake table, and the one thing my best friend has asked me to do, I’m about to flunk harder than Bio class. “Who puts a damn stick in a cake?”

No. He cannot be here. I have a cake tier that has to come off, two spatulas that belong in a dollhouse, and Sandy. This cake is as good as dead. “Excuse me?”

“Dowel.” Sandy steps into view, slinging a wet towel into the sink. “In the cake?”

“Thank you. Think I’ll stab somebody with it.” Half of the tier comes up, sucking free of the frosting, and the buttercream threatens to crack. My hands are, big surprise, not cooperating. “I’m sorry.”

I drag the spatulas slowly around the edges of the top tier. This cake is so detailed. So detailed. The scrollwork is just ... wow. It would be a travesty not to look at it, to take in every single thing about it, right now, for posterity. “I’m sorry for the eggnog thing.” It’s much easier to say this without his incredible eyes boring into mine.

I clear my throat. “I shouldn’t have assumed.”

“I did listen to you, you know. About being a lousy drunk.”

My palms are sweating. It’s the first time he’s brought up that summer in conversation, ever.

The tier wobbles dangerously. I set it down again in a hurry. “Well, she’s back in detox.”

He flinches. It occurs to me that his question was genuine, not the usual pointed poke for gossip.

Our eyes meet, and guilt flickers in my belly. “I haven’t seen her in weeks. She’s ... doing her thing.” Shrug. “Like always.”

He nods. “Should you be doing this alone?”

I straighten up. “What, dealing with my mother?”

“Oh.” Us trying to de-dowel a cake tier together is the fastest way to a popped eyeball; he knows it, I know it, I’m pretty sure the UN knows it by now. “If you can find more spatulas in this place,” I say, pointing to the sea of drawers, “be my guest.”

He has a look around and comes back.

“I’m not throwing the tier.”

“I didn’t say you were going to throw it.”

“This is Amanda-Claire’s wedding cake --”

“Obviously, would you just --”

“You want to try?” I hold out the spatulas.

He looks at the plate, then the cake, then the toast coming to an end through the doors of the kitchen. “No, I think you’ve got it.”

And I think you don’t want to be the one who tells Amanda-Claire you dropped her anniversary tier. “Then be quiet and let me do this.”

I can’t do this. There’s not one dowel, there are three, and he’s still here. The cake slides up the dowels like a rickety elevator. The spatulas are too flimsy. “What the hell are these for anyway, meringue?”

“What’s not wrong with it?”

“Hey.” I point a spatula at him. “There is a sizable percentage of the population who understands that meringue is crap.”

He smirks and turns my arms to jelly. “Obviously you’ve never had my meringue.”

I gape at him, then go back to the cake. But it’s useless. The second the tier clears these sticks, it’ll topple onto the linoleum. As soon as I think it, I start to sweat.

The tier tips, sliding off the right spatula toward the tier below it. “Shit, shit, shit.”

“Get the plate out of the way!”

The cake topples. Sandy lunges, swings the plate up, and --

Sandy and I stare at it dumbly, then at each other. Applause swells in the next room. Like a dam breaking, we’re both laughing.

Sandy’s smile is wide and clean, crinkling the skin to either side of his nose and setting off the dimple I remember. He hasn’t smiled this wide, this truly, all night. The last time I saw it --

He slaps a hand onto my shoulder and gives me a shake. We’re both braced on the table now, a war council of two with a vanquished cake between us. His thumb presses firmly against my clavicle. “Good job.”

His palm beats heat into my skin and I shiver.

He's Behind You! (MM)
Clare London
In Shelf
$0.00
Tweets by
sirenbookstrand