A short story to mark St Dwynwen’s day, the 25th of January. With chickens.

Marc returns home from London to his isolated Welsh cottage for good, having found his ex boyfriend shagging someone else in their bed. Who’s the thin, freezing cold man with the bruised face he finds in his barn? Will the tenuous connection between them grow, or fade away? 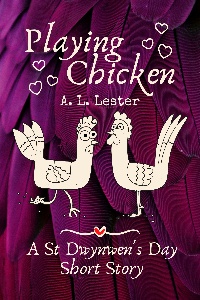 His first aid kit was rudimentary but covered the basics. Antiseptics, dressings, butterfly strips. It should do the job. He hauled it out from under the driver’s seat, eyeing the squeezed-in boxes disfavourably. That was going to be today’s job, he supposed.

He was so taken up with his mission that he forgot there should have been a chicken in the porch until he turned back toward the house. He blinked in disbelief. She had a friend. Two friends. They were sat in a row on the back of the garden bench underneath the parlour window. As he watched, they jumped down, one by one and stood in a line, as if waiting for him. The two new ones were very clearly the same breed as Chicken Number One. Big, fluffy, orange. One had more exciting headgear than the other two and was a bit bigger, so he guessed that was a boy-chicken. Cockerel. Cock. He sniggered quietly and then stopped himself as the first chicken ... he could tell it was the original one because it had a bit of black in its tail and the others didn’t ... looked at him disapprovingly.

Obviously cock jokes were out. The telepathic chicken didn’t like it.

He performed a shuffling dance around them to get back indoors. “You’re like the Midwich Cuckoos,” he told them. “You are not coming into my house. Stay outside. It’s bad enough having a porch full of chicken shit.”

Mal was on his feet looking at him in alarm when he stepped through the parlour door, and the dog was standing beside him, hackles up.

“Who were you talking to?” he asked in a panicked voice. “Is someone out there?”

Marc shook his head. “Chickens,” he said. “I seem to have chickens living in the porch. It’s fine. He narrowed his eyes. “What makes you think there might be someone out there? Who hurt you?”

Mal sat down on the edge of the chair and ran his hands over his cheeks, pulling a face. The dog sat beside him and put her chin on his knee, staring up at him, and he absently began to pet her ears. Marc knelt beside him and opened the first-aid box.

“My ex’s dad,” he said, quietly, after a moment or two. We’d split up anyway. Ages ago. But he saw me in Welshpool a couple of days ago and wanted to drive the point home.’ He shivered. “I’d only gone down into town to pick up some food and bits.” He winced as Marc turned his face toward the light and began to wipe the cut against his hairline with antiseptic. “I’d left Anghared up here, else he wouldn’t have got near me.”

The dog gave a small woof as she heard her name.

“So how did you end up in my barn?” Marc said, gently fixing butterfly strips over the cut. It had come open again and was bleeding a bit, but it looked like it would be fine. “Come on, let’s look at your ribs too, while I’m at it.”

“They’re fine, honestly. Only bruised.” Mal pulled away and Marc just looked at him. Mal sighed. “All right, all right.” He began to unzip the big hoodie he was swamped in and winced again. Marc raised an eyebrow, silently asking for permission and then reached out to help when Mal nodded. There were a lot of layers to get through and it took a while to gently extract him. The cold was still coming off him in waves and he was shivering badly as he said, “I’ve been staying up in the woods. But I felt too bad to get home. Anghared found me, didn’t you girl? And we needed somewhere out of the cold. I’m freezing, still.”

He was shuddering, which was probably a good thing in retrospect, Marc thought. He hadn’t been shivering at all when he’d first come inside. Incipient hypothermia. He had a quick look and a gentle feel of the ribs. They were badly bruised but he couldn’t feel anything shifting around, so he’d call that good. Mal’s skin was icy cold under Marc’s fingers.

“Yes,” said Marc firmly. “I don’t want you to die on my first day home for two and a half years. If that’s all right.”