Could you handle living forever, knowing you would watch your friends grow old and die?

Marco Sartori d’Argenzio and his partner Danilo Rosati have created a family and settled in the Duchy of Aragoni, but they still face the challenge of Marco’s family’s legacy: Marco may live forever, but Dani will not; unless the secret of Marco’s unique DNA is found.

Marco and Dani are focused on their children and the future, not expecting the past to mar their happiness. A very real threat materializes in a bomb attack and brings with it a twist of fate: the incredible possibility of the future they dream of -- living together forever. But it also brings the specter of danger to hang over the entire d’Argenzio clan, and Marco and Dani will do everything they can to protect their family. 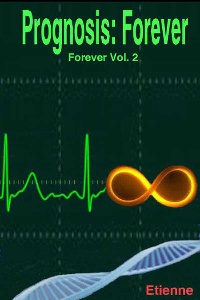 I got in the car, and Sal pointed it in the general direction of the airport. He was right -- the plane was quite early. In fact, we arrived in the hangar just in time to greet the people exiting the plane. There were several passengers, and Mrs. Rosati and her daughter were among the last to climb down the steps. On her previous visit, I’d noted that Mrs. Rosati was becoming a younger version of her mother. Like mother like daughter; Dani’s oldest sister was a younger but considerably thinner version of her mother, and even though I knew for sure that she was pushing forty, she didn’t show it.

“Pleased to meet you,” I said.

“Likewise,” she said in a rich contralto voice. “Has Dani told you that I’m the black sheep of the family?”

“No. Dani seems to think that he holds that position in perpetuity.”

“Well, I suppose it’s fair to say that I only held the title for a couple of years, until his sins trumped mine.”

“Well, to borrow a line from a movie, I ‘married an Aryan from Darien’.”

“That’s odd. You don’t sound like a girl with ‘braces on her brains’.”

“No, but I am raising my children in the heathen Lutheran Church, and that’s pretty serious, as sins are reckoned.”

“That’s one of my favorite movies,” I said, smiling.

“Sylvia,” Mrs. Rosati said sharply, “you promised to be good, and what are you two talking about?”

“Sorry, Mom,” Sylvia said. “Those are lines from a movie.”

We were interrupted before anything else could be said. “The ladies’ bags are loaded, Conte Marco,” Sal said.

In the car, Sylvia said, “Seriously, Marco, hasn’t Dani ever talked about me?”

“He doesn’t talk about his family at all. At least, he didn’t do so during all the years preceding the attack -- I think the whole topic was just too painful. Since then he’s opened up a bit, but not much.”

“I hope we’re not going straight to the hospital,” Mrs. Rosati said.

“No, Ma’am. We’re going to our apartment in the castle, so you and your daughter can freshen up a bit. After that, we’ll go to the hospital.”

“When I saw him early this morning, he was doing remarkably well, and claiming that he felt great.”

“You don’t sound convinced of that.”

“I’m not accusing him of making it up, but it’s most unusual for a transplant patient to bounce back so quickly.”

“I thought we’d be staying in your house on the mountain again,” she said.

“We don’t usually move up there until school is out -- that makes it easier for the nanny to commute back and forth to her classes. As soon as the boys are out of kindergarten for the summer, we’ll make the move.”

“Mom has told me so much about your house,” Sylvia said, “that I was hoping to see it.”

“That can be arranged. By the way, Mrs. Rosati, how is your mother?”

“She’s fine, but my father isn’t doing so well.”

“At his age,” Mrs. Rosati said, “nearly everything is serious, but he’s expected to recover.”