She spun around, eager to answer Scott’s question. Eager to do almost anything for him. “Yes?”

“Is your father still around?”

Thrown by his question, she frowned. What the hell did her father have to do with anything? The last person she wanted to think about was her awful father. “If you’re asking if he’s still alive, then yes. Why do you ask?”

“Any brothers or sisters? Or uncles?”

“Three younger brothers, but they’re scattered to the wind with two of them in the military and stationed out of the country. And my uncles live clear across the country. Why are you so interested in my father and the other men in my life?”

He shrugged and finished connecting the wires to the new light fixture. “I just figured they’d be here helping you out.”

“Oh.” Please tell me he’s not one of those guys. The kind who thinks a woman can’t handle a business on her own.

“Yeah.” He glanced around the room. “I mean running a business is tough work. Even in a small town, you’ll have to work long, hard hours to make it succeed.”

“I kind of planned on the long hours and hard work.” She wanted to give him the benefit of the doubt. Maybe she had him pegged all wrong. “I’m still not getting what you mean.”

“He means that it usually takes a man to run a business well.” Billy broke one of the empty boxes down and placed it on the pile of boxes ready to go into the recycle Dumpster.

She chuckled, sure they hadn’t really meant to sound chauvinistic. Only Foster kept quiet, his glittering gaze jumping from one to the other. “I disagree. A lot of women have run their own businesses, as well as huge corporations. All by their little lonesomes.”

Their expressions were priceless. Like they’d just stepped in a steamy pile of horseshit. Billy was the first to recover.

“Look, Betsy, we didn’t mean anything by it. It’s just that we think women are better suited to be ma— uh, wives and mothers. You know. Because they’re so nurturing.”

She smiled, suddenly finding the men less attractive. “Oh, I understand, all right. And, yes, women are nurturing, but men can be nurturing, too.” She arched an eyebrow. “At least, most men. Just like men can be great in business, right along with women.”

“Shit.” Scott held up his hands and tried to backpedal. “Baby, don’t go getting all riled up. We didn’t mean anything. We were only talking.”

She bit back a retort. Instead, she plastered on a shit-eating grin and edged closer to Scott. He took a step back. “Of course not. I understand perfectly. You’re traditional kind of guys. The kind of men who like women to know their places and stay in them. The kind of men who want their woman barefoot and in the kitchen, at home when they get back from working their asses off all day. The kind of men who tell a woman what to think, if she can talk, and when she can leave the house other than to buy baby formula and groceries to make his dinner. Have I got it straight?”

“Boys, I think you fucked up.” Foster crossed his arms and shot her a soft smile. “Don’t worry, darlin’. I’m more liberal in my way of thinking.”

“Good for you.” If they didn’t have such a backward way of thinking about women, she would’ve loved them calling her baby and darlin’. But she’d been down the road where a man told her what to do, and she wasn’t going back. “Guys, I really appreciate all the help you’ve given me, but I’m going to ask you to leave now.”

“Aw, come on, baby.” Scott drew closer and attempted to pull her into his arms.

The urge to give in was so strong she almost did. But her pride wouldn’t let her. She’d come too far to turn back into the weak woman she’d been. She pointed toward the front door. “Please leave.”

“This is crazy, honey. Let’s talk about this.”

The more they stayed, the harder it was to want them to leave. “I asked you to please leave.”

Billy started to argue more, but Foster cut him off. “Knock it off, man. I think you and Scott have done enough damage for one day.”

Scott grumbled and set down the last light fixture. He stalked past her then paused as he came shoulder to shoulder with her. The three of them were so close she could draw in a long, slow breath and get a good whiff of their musky masculine scents. It took everything in her not to close her eyes and whimper with need.

She startled as he skimmed the backs of two fingers along her cheek. “A little tension adds to the sex.”

Before she could think of any way to respond, they strode out of the store. She let out a breath she hadn’t realized she’d been holding. A ripple of emotion shook her body as she hurried over to the front window.

The last thing she’d expected to happen had happened before she’d realize he was doing it.

Her body still hummed from having his next to hers. She’d known he was strong, yet she hadn’t realized how terrific he’d feel holding her against him. And his lips? When had a man ever had such soft, yet firm lips? She shivered thinking about his tongue forcing its way inside her mouth. He’d been commanding, demanding, and she’d loved every second of it.

If any men were worth giving up her independence for, it was them. But she was too strong to do that now.

Yet, she had to wonder. Did it take a stronger woman to let a man take charge?

After giving the store another good look, Foster gave her one of his amazing smiles. “Can you think of anything else you need to have done?”

“No. Thanks for everything.” Yet she couldn’t let it go as easily as that. “I don’t understand what’s going on. Why are you helping me out?” Or was it more that she couldn’t believe what was happening? Would they come onto her or not?

“For an intelligent woman, you sure can be dense.”

“I guess so because I’m not getting it. Don’t get me wrong. I appreciate everything you three have done. It’s just that—” She stopped, unwilling to take the next step. If she were wrong, she’d be humiliated. Billy’s kiss could’ve been an impulsive act he now regretted. If so, they really were there just to smooth things over. Nothing more.

“Here’s the thing. We want you, darlin’. We want you bad.” Before she could think of a response, Foster pulled her against him. “Billy got a taste of you. Now it’s my turn.”

He crushed his mouth to hers, catching her off guard. Her fisted hands went to his chest, but she didn’t want to fight back. Instead, she pushed against him, her hunger for him flashing alive.

She was so damn lonely, but this had nothing to do with loneliness. Even if she’d had a hundred other men warming her bed, she would’ve still ached to have Foster. And Billy. And Scott. A feeling deep inside her broke free, whirling around at lightning speed throughout her, demanding that she give them everything and anything they wanted. Her body craved them like a starving woman would crave food. Her soul yearned to make them part of her. Her mind, filled with awful memories of her father and Robert, screamed at her to stop, but it was no match for her blatant, naked need to have them.

Foster captured her mouth, kissing, nibbling, sucking until her lips burned with his advances. He cupped her butt cheeks and shoved her hard against him. His hardening crotch pushed against her stomach. His chest was firm against her large breasts.

She gave in to him, suddenly wanting to do whatever she had to do to please him. Moaning, she whipped her tongue along his lips and then moaned again when he caught it and sucked it into his mouth.

What did he taste like? She couldn’t put it into words. Instead, images evoked by his flavors floated through her mind.

Why try and put it into words when the images and feelings explained it well enough?

When at last she had to draw in a full breath, she leaned her head back, breaking the kiss. He groaned a deep, low sound that vibrated into her pussy, and then he began nibbling and kissing the curve of her neck. He cupped one breast, his large hand nearly covering all of it, and massaged her nipple with his thumb.

If I don’t stop him now, I never will.

She was vaguely aware of the windows. Some of the butcher paper had fallen down, giving anyone walking by a chance to look inside the store. Yet she didn’t care who saw them. Hell, let the entire world see. Having a man like Foster kiss her was a thing to be proud of.

He moved her shirt and bra aside, making room for his mouth to find her nipple. She gasped as he licked around the taut bud then added a quick nip. She arched, urging him to uncover the other breast and give it equal treatment.

Foster stepped back. Or, rather, he was pulled back by Scott. She reached for a nearby clothes rack for support, feeling as though Foster had been the only reason she’d remained on her feet.

“We were going to take it slow, right?”

Foster nodded at Scott, but his attention never left her face. Heat coming from both outside and inside her washed over her. Her breaths came in ragged gasps for air.

Until, that was, Scott took her by the back of the neck and yanked her against him. A small yelp escaped her, but it was soon lost as he claimed her mouth. Once again, a strong arm wrapped around her and a hand fondled her butt cheek. He brought his other hand between her legs and covered her mons.

She melted at his words. Without thinking of the consequences, she silently gave in.

He worked his hand over her jeans, rubbing and bringing out even more moisture between her legs. Hot no longer described what she felt. She was enveloped in a sexual inferno.

Fuck me, damn it.

Yet she couldn’t bring herself to say the words.

Scott cupped her heavy breast and bent to take her nipple. He glanced up at her, amber flecks sparkling in his eyes and his lips curved in a soft yet wicked smile. She arched her back, urging him as she’d urged Foster to expose her other breast.

He slipped lower, leaving her breast to be chilled by the air conditioning. Billy eased beside her, taking hold of her tit and putting his mouth, tongue, and teeth to the task of torturing her aching nub. Foster had returned, doing what she’d wanted him to do earlier, freeing her other breast.

If she’d known it was going to happen, she might have stopped them. Thankfully, she didn’t. In a quick move, Scott took hold of the backs of her legs while his friends each grabbed an arm. She sucked in a hard breath as she landed on top of a nearby table. 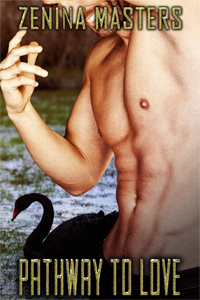