Anthony Crawford is an unemployed menace to society who spends his time cooped up in shady apartments drinking alcohol and mixing it with whatever drug is available. Gabriel Werner is a stand-up citizen who’s made a living saving lives as a paramedic. They could not be farther apart.

However, when Anthony becomes the victim of a horrendous car crash, Gabriel is the one who saves his life. The accident is covered in an air of mystery which can’t help but point to the idea that something wanted them to meet.

They attempt a slow ease into their fresh relationship. At first, they’re unlikely friends. Then, they’re even unlikelier partners.

It soon becomes clear that Anthony has more intention of dating his addictions than he ever had in dating Gabriel, which leaves the relationship strained. The more violent Anthony becomes, the more Gabriel wonders if he can even handle this. It only leaves Anthony with one question: does he truly have a problem? If he does, to what lengths is he willing to go to fix it? 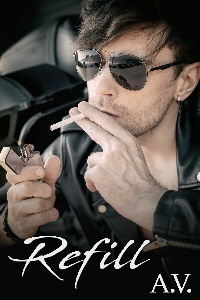 Hector would think he was ridiculous. Hector would call him pathetic and make him get up for a shower. As much fun as Hector had with the drinking and the drugs, he was still a real person with real aspirations and real goals. Real plans. If Anthony remembered correctly, today was the day that Hector would have been interviewing for an administration position. Going on to take care of the business world with his great mind, or whatever. Until Anthony had come along and told him that the world could wait until he was old.

Anthony deserved whatever he got for doing what he was doing, and he believed that. If his mixing of substances was going to kill him, then let it. That was better than whatever it was he was doing -- focusing on getting that next, ten-minute jolt of joy. All it ever followed with was the horrible paranoia. Someone was watching him. Someone was always watching him. He'd tried to ignore it for as long as he could remember, but now it was a pressing, painful thing against his chest like he couldn't breathe.

"Is that you, Hector?" Anthony slurred out, shouting into the empty air of his apartment. "Fuck off; I'm more than capable of dying without your help."

There was no response, because no one was there. Anthony was talking to dust filled air and getting angrier by the second. He could still feel something, like a hot squeeze. He batted at the air, trying to get rid of it. And it wasn't going anywhere. It was just squeezing harder, like he couldn't breathe.

Anthony pulled himself up to his feet, ready to panic, just in time for there to be a knock at the door. That was the last thing he needed. Some phantom knock. Hearing things, now. He was a walking cliché, wasn't he? He wished it all had killed him before it got this bad. He wished the car had.

"Go away!" Anthony shouted. "You're not even real," under his breath.

"Anthony?" came a voice through the door. A real voice. A woman's voice. His landlord's voice.

"Fuck," Anthony muttered. He hobbled over to the door and worked it open, only far enough that she could see him. She didn't need to see the mess he'd left right out in the open.

"Will you just get to the fucking chase?" Anthony snapped. "I don't need all the fanfare and nice crap. What do you want?"

She stiffened, immediately. "You're late on rent," she said. "I gave you some leeway with your hospital stay, but you're already two months behind. I just wanted to see where we were at."

"We're nowhere," Anthony spat. "Get the fuck out of my apartment. I'll pay your shitty rent when I have the money."

Anthony slammed the door right in her face and turned around to press his back to the door. Whether it was a fear she would try to get in or just the pure exhaustion, he didn't know. There was a weight on his shoulders that he couldn't quite hold up, and he didn't know where it came from.

"Anthony, open this door and talk to me. You're acting like an animal."

"I said go away," Anthony sneered. "I'll pay the fucking rent when I have money."

"You don't even have a job!" she argued. "Anthony, I care about you, but if you continue to act like this --"

"You're not my fucking mom! You care about my goddamn money."

There was a long moment of silence as his landlord just mulled over what she could possibly say. She folded her arms and sighed, taking a step back from the door.

"You have a week," she said. "If you can't pay your rent, I'll serve you with an eviction notice. Get your shit together, Anthony, or get out."