Can the cold case murder investigation be solved, and in the process, bring two ex-lovers back together again?

Liz Grey left Sage Brush, Wyoming, and the only man she ever loved, twelve years ago to be a cop in one of the biggest cities in the US. She returned a disgraced cop, and she was lucky to find a position at the county sheriff department. She's kept her head down, staying focused on her work, because she knows if she makes one mistake she'll quickly find herself unemployed.

Aaron Mansfield is a sergeant at the county sheriff substation. When he receives a phone call informing him that a dead body has been discovered on his father's ranch, he has no idea it will change his life.

Just before Christmas Liz and Aaron's lives collide after more than a decade apart. Can they put aside their past to solve a twelve-year-old murder case, and in the process will they find their way back to each other? The spark is still there between them, but Aaron just can't trust, or forgive, the woman who broke his heart without a second thought. 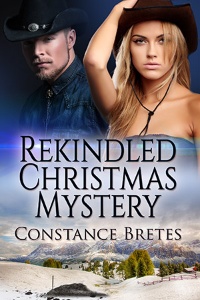 It had finally stopped snowing, and the wind had died down. The well-lit moon gave Liz enough light to walk to Aaron's front porch. She stood in front of the door for a few seconds, still debating within herself. Finally, she lifted her hand and rapped on the door. She heard a dog barking inside. She rapped on the door again. The dog continued to bark, and she thought she heard movement, and waited a few seconds more. The dog stopped barking, but no one came to the door.

She turned to walk back down the steps of the porch when she heard the latch on the door turn. She turned around just as Aaron opened the door. She could tell she'd woken him up. The dog stepped out and sniffed her, walked around her, and then around Aaron, back and forth while she stood there, speechless. The man was a god; he had to be. He stood at the door, with sleep-deprived eyes, his face with a day's growth of hair on it. His chest was bare, and beautiful. He had managed to slip on a pair of sweats, and he was barefoot.

"Liz. Is something wrong?" he finally asked. When she didn't answer, he said, "Liz?"

"Um, no. Nothing is wrong. I heard about your dad, and I went to the hospital to see you, and Joannie said you went home. So, I, uh…just wanted to stop by and see how you're doing and if there was anything I could do. I'm so sorry I woke you up. If you want, I'll leave now and let you get back to bed." All she could do was stare at him.

He opened the door wider and motioned for her to come inside. She walked into the dimly lit living area that made their shadows loom large in the room. He closed the door and turned to face her while leaning against it.

"Is this some sort of dream, or the start of a nightmare?" he mumbled under his breath.

"Why didn't you come back?"

"I didn't think you'd take me back." She wrapped her arms around her, shaking off the cold.

"And now?" He raised an eyebrow.

"All I really want is to be with you." She peered up at him through her lashes. Her body felt like pure liquid. She reached her hand out and put it on his arm. "Aaron, I'm so sorry about your dad. What can I do to help?"

"There's nothing anyone can do. We just have to let him heal." Aaron's gaze turned away.

"You must feel so alone," she whispered.

"I don't need your pity, Liz. I think you better go before we both end up saying something we'll regret."

Liz caught the bitterness in his voice. "Really, Aaron? I won't regret being with you. Let me stay and be with you." She came up and leaned against him.

He slipped his arm around her, staring at her mouth. He bent his head, and his lips touched her slightly. Lifting his head, he pulled back and looked in her eyes. He kissed her again, adding a little more pressure. Her world rocked.

Aaron pulled her hard against him, and she felt his erection against her stomach. His hands came up to her shoulders and slid her jacket off and it fell to the floor, and at the same time, he flicked his tongue over her lips. Despite the chilliness in the room, she got warm from the heat of his mouth on hers and his hands running up and down her back. She cupped his chin and spread her fingers lightly over his cheek.

Suddenly, he lifted his head and stared into her eyes. "What do you want me to do?"

In the glimmer of the room, she could see the intensity of his eyes as they bored into hers. "Make love to me," she rasped, trying to draw in a breath.