Run for the Roses (MM)

Relationships aren’t in the cards for everyone and Vladimir ‘Val’ Mihalic figures maybe, in his case it’s for the best. After ending the last in a string of abusive relationships, Val has spent the past year living alone, single and fear free. He’s got a good job at Churchill Downs, a place for him, his three dogs and his horse to live the quiet life. When his best friend, Janelle, is seriously injured in a carjacking, putting her career as a jockey on hold, Val steps up to help her through the crisis. When Janelle’s estranged father shows up at Val’s front door, Val’s life, and his resolve to stay relationship free takes a hard sideways turn.

Wyatt Harig always wanted to be a part of his daughter’s life, their estrangement was forced on them both. When she’s seriously injured, he knows things have to change and he’s the only one who can make that change. He gets to Kentucky to find his daughter unwillingly neck deep in an elaborate gambling scheme that’s led to murder. What he also finds is Janelle’s best friend and roommate, Val, a kindhearted, alluring man twenty years his junior.

Val is a little happier than he’d thought he’d be when Wyatt stays and starts digging deeper for the truth about Janelle’s ‘accident’. As they uncover layer after layer of the events leading up to that fateful day, they build a solid friendship. That friendship combined with a mutual physical attraction have the potential to turn to love. Uncovering the truth and exposing conmen and murderers puts what’s just begun between Val and Wyatt as well as their lives, in jeopardy. 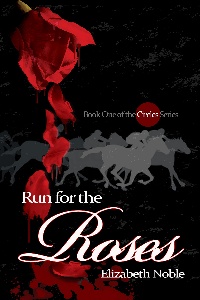 Run for the Roses (MM)

Wyatt glanced down and grinned at the same time. He was nice looking when he smiled. Obviously he’d heard that more than once. “Janelle is adopted. And yes, she knows.” He put his hands in his pants pockets and sighed. “Do we have to do this through the door?”

“I’m an investigator, and I work in antiquities. I’m not a mob hit man.”

“You do sort of look like one,” Val said.

Wyatt chuckled. “Nah, they spend much more on their clothes.”

Val unlocked the door and stepped back so Wyatt could enter. He was impressed that Wyatt wasn’t bothered by three big dogs dancing around at his feet. Instead he put one hand out for them to sniff and walked between them.

Wyatt held out his hand and smiled. “Let’s try again. I’m Janelle’s father, Wyatt Harig. You and your entourage are ...?”

Val shook the offered hand. Wyatt’s hand was strong, his handshake firm. His hand was as warm as his smile. “Vladimir Mihalic. Val. They’re Cooper, Bear, and Titan.” He pointed to each dog as he said their name.

“Good-looking crew you have. Trained to kill on command?” Wyatt asked.

“Uh-huh.” Wyatt tilted his head to one side and leaned down far enough to pat the dogs.

“Not in the least,” Wyatt said. “I can tell they’re incredibly vicious.”

“I guess the hand licking blew their cover.” Val glanced at the floor for a second and scratched at his forearm.