“Did you see that?” Toak asked with awe.

“Yes,” Stryk answered. “Where is the fucking medic?”

Toak and his brothers turned as the chief medic, Damk, moved to stand between him and Hakk.

“Is the translator for the female?” Damk asked.

Toak turned to glare at the man when he heard admiration in his voice.

“You will not touch the female other than to insert the translator,” he commanded in a hard voice. “Is that understood?”

“We will ask the female the questions after you have given her the shot,” Stryk said in a growly voice.

“Will she let me get close to her?” Damk asked. “She looks a little frightened.”

“We will hold her if necessary,” Stryk said.

“That will only scare her more.” Palk sighed.

“Do you have any other ideas?” Stryk asked.

“Palk, see if you can get her to come to you,” Toak said.

Palk knelt down on the floor again and this time when he reached out toward her he didn’t touch her, giving her the choice of the physical connection.

Toak wanted to move closer too, but he didn’t want to overwhelm the small female who was destined to be his and his brothers’ mate. When she lifted her arm he held his breath and it took everything in him not to shout with joy when she clasped Palk’s hand.

With a slowness Toak had never seen from Palk before, his brother rose to his feet, helping the female up from the floor. Palk took a step back and when she followed took another and another.

Toak, Hakk, and Stryk stepped to the side giving Palk freedom to move wherever he was leading their mate. When Palk stopped at the large table he drew a chair back and smiled down at the female, gesturing with his free hand for her to sit. She glanced back at Toak and his other brothers over her shoulder before taking a seat and when Palk sat beside her he didn’t relinquish her hand.

“We should sit, too. Hopefully she will relax when we are seated and then Damk can creep up from behind and inject her without us having to restrain her,” Toak suggested.

“Good idea brother,” Stryk murmured before walking toward the table.

Toak and Hakk followed and when they were all seated and Damk had moved out of her line of sight and as she glanced back over her shoulder she sighed. Toak realized it was a sigh of relief.

Once River knew the strange men weren’t going to hurt her and were in fact trying to help her, she relaxed. The smell of food caused her mouth to fill with saliva and her empty stomach to rumble. She stared at the steam rising from the laden plates set on the table and although she didn’t know what any of it was, it smelled delicious.

The man with the brown eyes filled a glass full of a blue colored liquid and after taking a cautious sniff and smelling what she thought was some sort of juice, she took a sip. Flavor exploded on her taste buds and she couldn’t stop the moan of appreciation forming in her chest from escaping. River quickly drained the contents and handed the empty glass back to the brown-eyed man with a smile.

She yelped when searing pain pierced her neck and clutched at her head as agony traveled from the side of her throat to and up into her brain. She’d never felt anything so bad in her life. It was way more than what she figured a migraine and brain freeze would feel like at the same time.

Tears leaked from the corners of her eyes and she could hear the men shouting in their strange language and just as the agony began to recede the words they spoke began to make sense.

“Do something, Damk. She is in so much pain.”

“If I thought it would hurt her I never would have ordered you to inject the translator,” another of the men said in an angry and concerned tone.

“Fix her!” another bellowed.

Finally the pain waned and she dropped her elbows to the table and looked to each of her sides and at the four men yelling at someone behind her. When she heard a soft beeping sound she turned and looked over her shoulder.

“Are you all right now, little female?” the man holding a small rod in his hand asked.

When she saw he wasn’t looking at her she followed the direction of his gaze and to her awed surprise he was looking at some sort of writing or symbols that were displayed in midair. It looked like a hologram or something from a futuristic movie and she gasped.

River nodded her head and the met the man’s amazing eyes. His irises were blue and his pupils were the same purple color as the brown-eyed man. He smiled at her and then looked to the man seated on her right.

“She is fine, sir. The translator is working.” He bowed and walked away.

“What is your name, little female?”

River turned to face the man on her right. He was so good looking it almost hurt to look at him. His hair was just a tad longer than shoulder length and it was a dark blonde color which gleamed under the glow of the light crystals hanging from the ceiling above their head. His eyes were a mixed color of green and brown and he also had purple pupils.

She drew in a breath as he tilted his head before smiling down at her. Her heart flipped and her breathing picked up pace as tingles of awareness shot through her nervous system.

“I am called Stryk Mag and these are my brothers, Palk, Hakk, and Toak.”

“So damn gorgeous,” Toak said with awe. She was absolutely amazing and he wanted to touch her everywhere all at once. He shuffled down the bed on his knees and hooked his fingers into the small piece of cloth hiding her sex from view and then met her gaze. “May I?”

River nodded and he gently pulled the covering away. The aroma of her desire got stronger and his mouth watered for a taste of the sweet honey but he wasn’t sure he had the patience to do that because he wanted his cock buried in her tight, wet heat as he claimed her. He perused her sexy body with his hungry gaze and when he saw the small strip of hair on her mound, saliva pooled in his mouth. He couldn’t not take a taste. Even though he wanted to be buried deep inside of her, the perfume of her pussy was calling to him and he couldn’t ignore it.

Toak placed a knee between hers and growled with appreciation when she made room for him by spreading her legs. He looked at her soft plump folds and hunkered down until he was lying on his stomach with his mouth close to her cunt. His hands caressed up the outside of her thighs and then wrapped around her legs to hold her open and he lowered his head.

The sweet flavor of her honey exploded on his tongue and making him moan and delve for more. He pushed his tongue into her pussy as far as it would go and curled the end to scoop her juices out and swallow it down.

River was on fire, her blood so hot it was a wonder her skin hadn’t melted off. When Toak pushed his tongue into her pussy, her inner muscles clenched and her whole body quivered.

The mattress dipped on either side of her and she opened eyes she hadn’t realized she’d closed to see Hakk, Palk, and Stryk watching her hungrily. She ran her gaze over their naked bodies and her heart sped up even more. They were all so big and strong, handsome and sexy, and their erect cocks were huge. Stryk nodded at Toak and when he withdrew his tongue from her pussy she wanted to moan with frustration, but then Stryk somehow managed to get in behind her and she reclined against his body between his spread legs.

Stryk moved her hair to the side and began to lick and nibble down her neck and on her earlobe sending sparks of pleasure to shoot down to her already sopping pussy. Hakk leaned over and took her mouth, kissing her with a wild abandon she matched. She’d never been the center of such manly attention and she loved it, but she also wanted so much more.

She mewled when Palk laved one nipple before drawing it into his mouth and suckling on the peak firmly. The sensations were overwhelming yet so glorious and she was hungry for so much more.

When Toak lapped at her clit and pushed two fingers inside her cunt she tried to close her legs because it was so good it was nearly too much, but he tightened his hold on her and flicked the tip of his tongue over her pearl faster and harder. Even his fingers were big and they stretched her tissues as they glided along her wet inner walls, but she felt nothing but pure pleasure. The friction of his thrusting fingers elicited so much carnal bliss she wasn’t sure she would survive it.

Hakk broke the kiss and then he moved lower and suckled at her other breast.

River arched her chest pushing her breasts deeper into Hakk’s and Palk’s mouths and then she bowed her hips taking Toak’s fingers further into her pussy. All the while Stryk was kissing, licking, sucking and nibbling on her neck.

The pressure inside began to build and so did the heat. Sweat popped out on her skin and she groaned as her limbs trembled. She’d never felt so weak and yet stimulated at the same time.

She reached out and cried with frustration when Hakk and Palk rolled away from her and Stryk shifted out from behind her, then eased her onto the mattress.

Toak moved up over her, pressing his chest against hers and she moaned as his birth mark contacted her skin, sending tingles and warmth racing through her blood. He rested his weight on his elbows and then lowered his mouth to hers.

River groaned, swirling her tongue around and along his, savoring his spicy masculine flavor mixed with her cunt juices on her taste buds. He tasted so good, she clutched at his head to keep their mouths connected and scraped her nails lightly over his scalp. His growl was muffled by her mouth and then she gasped when she felt the tip of his cock slip up through her drenched folds and press against her clit.

He was so much bigger than she was and felt cocooned in protection as he covered her. The heat coming off of his body was comforting and also arousing. She felt like the most precious woman in the world and also the most cherished. And then she wasn’t thinking at all. All thoughts left her mind and she was once more drowning in sensation.

The head of Toak’s cock was pressed against her wet pussy and he slowly yet firmly pushed his hips forward. Her tissues felt like they stretched to capacity but there was no pain, only pure unadulterated pleasure. 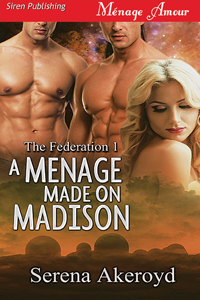 A Menage Made on Madison (MFM)
Serena Akeroyd
In Shelf
$5.99 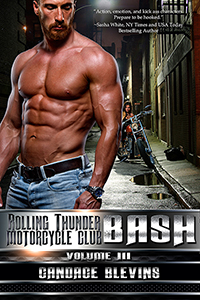