Sleeping on a Bench (MM)

River's husband is in a coma, and River is putting on a tiring act of pretending to care. When he meets the charming and quirky Luke by chance in the hospital garden, he receives a pick-me-up like no other.

Luke is a traveler who never stays in a town more than two months. He's searching for something to dedicate his heart to again after leaving behind his prior life. He and River hit it off well and start an intimate relationship while Luke is in town.

It doesn't take long for Luke to see how unhappy River is in his current life, but can he convince River to leave town with him? River struggles to admit the truth to himself and Luke has his own dreams for a life without regrets.

Their relationship is shaken further with an unexpected turn of events regarding River's husband, but will this help solidify River's choice? How long is Luke willing to wait for him? 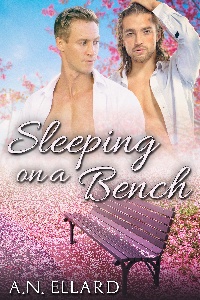 Sleeping on a Bench (MM)

In between customers, River sat on the back counter facing the register and front door, a steamy hazelnut latte in his hands. He rubbed his fingers up and down the smooth coated paper as the drink warmed his palms and watched the light beams from the window crawl closer across the floor. When the door chime rattled for the fifth time, he didn't bother to jump down. His eyes were drooping just sitting there and he took a sip of the latte and watched the customer block out some of the bright light coming from the door and wall-length window.

"I'll have what you're having." The voice's familiar playfulness shocked River awake. The customer came to the counter, leaning both elbows on the open space in front of the register, and placed a five-dollar bill on the surface.

"What are you doing out at eight in the morning?" River couldn't look at Luke. He slipped off the counter and walked to the register, but he couldn't peel his eyes from the floor.

"Exploring. I haven't seen everything yet and I gathered a list of good restaurants to hit up, too."

"This town is shitty and old. The best things to look at are the Maseratis at the car place," he deadpanned.

Luke laughed from his chest with too much warmth and energy for an early morning. "Have you ever been inside one of those? They're ugly."

"Oh? You've been in a fancy car?" It was the most unimpressed, sarcastic question River could muster as he busied his awkward hands by going through the motions of a hazelnut latte.

"I've done a lot of things, River, and I'm not quite finished gathering experiences either."

His tone was too suggestive to ignore. River only hoped his cheeks weren't turning colors again. "And this coffee shop was on your list?" He managed to speak. This was quite a coincidence he didn't think was a coincidence, except how did Luke know he worked here?

"Aw, are you thinking it's fate that we met again? But it was bound to happen. It seems like you go to a lot of places around town." Luke's smile wavered.

"You could have said hi last night. I don't bite." River held out the finished latte.

"But you looked upset and something about your friends was kind of scary, too." Luke chuckled awkwardly, perhaps hoping to keep the atmosphere still light with the likely harsh observation.

However, River wasn't feeling offended. Rather, he felt transparent in front of the man, as if his insecurities were spilling out like bouncy balls and he knew however much he scrambled after them, they would just keep jumping all over the place. It was terrifying. It was totally new. It gave him a rush like no other. He could only stare ahead like a deer as Luke's spotlight shone on him. When Luke's hand swept across his fingers to transfer the warm cup, River dared not breathe.

"Don't make that face ..." Luke brushed the back of his index finger across River's left cheek. River's body returned to reality with a jolt and his eyes fell back to the counter.

"No. Like you don't want the world to know something face," Luke spoke softly. He turned around and leaned his back against the counter. "But if someone's in the hospital, things aren't fun anymore. I get it."

River's guard doors fell shut immediately. No one understood. Especially because what they thought was happening with his Dale situation, wasn't the case. What he really felt was completely opposite!

"I won't ask about anything, so let's escape."

"What are you talking about?" River mumbled, still not out of his thoughts.

Luke turned around to look at him again. He took a sip of the latte and swished it in his mouth before swallowing. "This is really good! When do you get off work?"

"An hour and ten?" Was Luke smiling like a goof over a hazelnut latte?

"All right. I'll be back and we'll go somewhere fun."

River couldn't think of a single fun place to go in town. Not his problem, though. It might be interesting to see what Luke came up with. He shrugged and wet a rag to busy himself wiping off the spotless countertop.

"I'll be back for you." Luke leaned over the counter and whispered the words before pushing away and walking out the door.