Quentin Quasar has found that being a telepath is a mixed bag: it's great when he's catching an unfaithful spouse or tracking down a thief, but it's horrible when his bedmate is thinking unflattering thoughts during sex. It's no wonder that instead of saying his prayers every night, Quentin sends tendrils of thought out into the world, looking for another telepath to ease the loneliness.

Imagine his surprise when he finds one-and the young man needs help!

Nate Braddock was plenty panicked at being kidnapped by fanatics who planned to "beat the devil" out of him. With Quentin's help, and then his partnership, Nate finds the courage to take a stand against his mother's religious intolerance. Together they'll confront an uncomfortable truth: telepaths may not be devils, but not all of them are angels, either. Quentin and Nate will need their combined gifts to tell the difference.

I checked into a new-looking Holiday Inn Express on SR-40 in Silver Springs and settled down for yet another boring evening in yet another town. I was already tired enough from three weeks of constant travel that I didn’t even consume my usual glass or two of wine as an aid to sleep. Instead, I turned out the lights in my room, settled back on my pillow, and as I’d done in countless hotels over the previous three weeks, lowered my shields to probe. There was too much mental static, for want of a better term, to the west of me, as would be expected from a city whose metro area had a population of nearly three hundred thousand, so I concentrated on the area to the east, which, because of the presence of the national forest just a few miles away, was very sparsely inhabited. Needless to say, I had no idea how my gift worked, let alone how to control and focus it, as I probed to the east and north of where I lay. All at once, something latched onto my little tendril of thought, and I had a contact.

{Help! Somebody help me, please!}

{Who are you?} came a clear and insistent demand.

{My name is Nate Braddock, and I’m being held prisoner somewhere in the forest.}

{My mom and my stepfather belong to a really nasty charismatic cult, and they think I’m possessed by the devil, so they had me kidnapped and brought here for reprogramming.}

{Why would they think that?}

{You know, revealing that I know things when I can’t explain how I know them. Thank God they never suspected that I’m gay or things would be even worse -- if that’s possible. People in those cults really hate gays.}

{You never told me who you are.}

{My name is Quentin, and I’m in the area on business.}

This entire exchange had taken only a few seconds, and my mind was reeling from the effect -- and the excitement.

{How will I know where you are?}

{I was drugged and blindfolded when they brought me here, but I can get the information you need out of one these guys’ brains.}

{How many of them are there?}

{At the moment, two. I’m in one tent, pretty much tied up hand and foot, and they’re in a couple of tents nearby. Give me a minute.}

I’d been quickly dressing during this exchange, and I grabbed the notepad and pen provided by the motel when I finished. Without warning, a series of images began to hit me, so I began to frantically make notes. I was overwhelmed that I could receive actual images from another telepath, but I somehow managed to write down the directions he’d lifted from one of the kidnapper’s minds. I asked him to send it again just to be sure.

{Nate, how long have you been in that tent?}

{Only a few bruises so far. They won’t start in earnest until the rest of their group arrives this weekend.}

{The cult has a group of people whose specialty is reprogramming people like me.}

{Do the two guys have guns?}

{How will I know if I’m rescuing the right person?}

He started to describe himself, but I stopped him.

{It would be easier if you remembered looking at yourself in a mirror.}

An image of a young guy, naked from the waist up, landed in my head. His hair was what is called dirty blond, and he had a sort of swimmer’s build. I still couldn’t get over the fact that I was receiving actual images from him.

{Whoa! I didn’t need to see you naked, but thanks, and by the way, you’re kind of cute.}

{Thanks. In the bathroom is the only time I ever see myself in the mirror -- I’m not allowed to have one in my room. What do you look like?}

I sent him an image of myself -- fully clothed, of course. 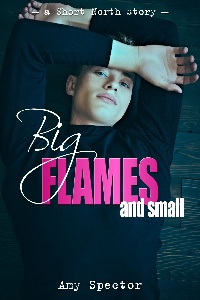 Tiglon by the Tail (MM)
Tia Fielding
In Shelf
$2.99
Tweets by
sirenbookstrand