Spirits in the Dark (FF)

Trista has always loved abandoned houses and the paranormal. Now that she’s at college only fifteen minutes from the notoriously haunted Hollow Street house, she knows exactly where she’s spending Halloween. She packs a bag, puts on her favorite vintage dress, and sets off, hoping to spot the ghost of the young, dark-haired woman who’s said to haunt the house’s living room.

Fellow student Keira does not like abandoned houses, and she isn’t particularly interested in ghosts. Visiting the Hollow Street house was not how she’d planned to spend Halloween. But her little sister, who loves all things spooky, has begged Keira to check out the haunted house next to her university, and Keira has trouble saying no. She doesn’t expect to see anything supernatural, so it’s quite a shock to find herself face-to-face with a mysterious young woman in old-fashioned clothing who seems to have appeared from nowhere.

When the two ghost-hunters come face to face, each mistakes the other for the ghost she’s looking for. How tragic, they both think, that such a beautiful person should have died so young. Of course, things aren’t as bleak as they seem, and the two women might find themselves pleasantly surprised ... if they can make it to the morning. Because real entities haunt the Hollow Street house, and they’re anything but friendly. 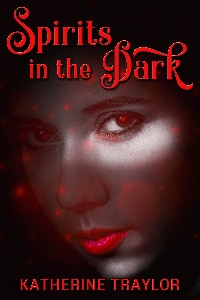 Spirits in the Dark (FF)

Something terrible had happened here. Standing in this dark room, looking out at what was left of the daylight, Trista had the unsettling feeling that bad things might happen here again, if the circumstances were right.

After what might have been ten minutes, or might have been an hour, her back and knees began to twinge. With a soft gasp, she stepped back from the window. Beyond this patch of dying daylight, the room was very dark.

This was the moment when she should decide: leave now, or stay, and try to spend the night here as planned? The loss of her phone had made the situation much more dangerous than it had been. If anything went wrong, she’d be on her own. Really, she should probably go. She had the recording (at least, if she was able to retrieve it later), and she’d had enough of a scare to haunt her dreams for years to come. Whatever else might happen, it had already been a productive evening.

But ... she didn't want to give up, right when she’d just seen something real. This was more of the paranormal than a professional ghost hunter might find in years of searching. And if this much had happened before the sun had even fully set, what might happen when it really got dark?

Still undecided, Trista left her things where they were and tiptoed across the hallway to the living room doorway. Miraculously, she managed to avoid all the creaky floorboards, though whatever lived upstairs probably knew exactly where she was. Holding her breath, she peered silently around the corner of the doorway.

Then her heart nearly stopped -- because the room was not empty.

A young, dark-haired woman sat under the window, her head leaned back against the wall. Her eyes were closed, but her lips moved slowly, as if she were talking to herself. She didn’t appear to have heard Trista coming.

For a long time Trista stood frozen, staring at the girl under the window, sure that the figure would melt away into nothing at any second. The girl was very slim, with long arms and legs carelessly folded. Her skin looked brown, though it was hard to tell in this light, and her cloud of dark hair was barely restrained by the clips that held it back on either side. Her pale dress and shapeless coat were hard to place in time from this angle, but didn’t look modern.

It was the girl’s face that was really striking, though: not pretty, exactly, but captivating. She had very high cheekbones and a sharp jaw, with a wide mouth that looked both wistful and inclined to wry smiles. Her lashes were long under dark, heavy brows. Her skin looked bare of makeup. She was beautiful, ethereal, indefinably wistful.

And, Trista realized finally, she was dead.

When she opened her eyes, Keira was not alone.

A woman stood where no woman had stood before, poised in the doorway as if it were a threshold to another world -- and in the faint, shadow-strewn light of the amber street lamps outside, she looked otherworldly indeed.

At the same time, though, the spirit looked real, almost solid enough to touch. If Keira had expected to see anything at all paranormal, it would have been the kind of thing you saw on ghost-hunting shows: a white blur passing the doorway, maybe, or a voice so faint as to almost be inaudible. Ghosts defied belief because they were so easy to explain away: a change in pressure, a hallucination, a radio in a distant room.

But there was nothing vague or mistakable about this girl. She was so stylized, so elegantly put together, that she looked almost like an illustration from the cover of a fifties novel. She wore a black dress and a heavy black shawl, and her black hair was neatly pressed and sculpted into the kind of style that took ages to create but was supposed to look casual. She was on the curvy side, and her skin was very pale, but her features were highlighted by elegant makeup: dark eyes, dramatic brows, and lips that curved into a natural smile. She could have been a stranger in a coffee shop, or one of Keira’s classmates. If she hadn’t appeared so suddenly, so silently, Keira would have assumed she was human.

But then again, there was a difference between the evidence ghost hunters tended to find and the stories told about ghosts by regular people. Keira suddenly remembered a story her grandmother had once told her: on the night after Keira’s grandfather had been buried, Grandma had come home alone to find him “sitting in his chair, just like any other night. And he looked up at me and smiled, and said, ‘Darlin’, would you get me a glass of water, please?’” Grandma had been so startled that she’d obeyed out of reflex -- and then returned to find the chair empty, and the room cold and still.

The ghost had not moved. She was staring at Keira as if she were the only thing that mattered in the entire world. Her regard was so intense that Keira felt a little lightheaded.

But not frightened. In all the time she had been watching the woman in the doorway, she hadn’t felt a single flicker of fear. Instead, she felt almost comfortable, as if she’d suddenly met a good friend on the street.

One of them had to do something, she realized finally. This moment couldn’t go on forever. She took a deep breath, hoping this was the right decision. “Hello,” she said, forcing herself to smile.