Juniper “June” and Eloise have been together since they were fifteen, and have been married for four years. When they first became friends, June fell in love with Eloise’s bubbly personality, but now, she can only see her wife’s flaws: recklessness, impulsiveness, and the ability to make any situation more complex than it should be. Fed up, June declares she wants a divorce and leaves.

But the universe has other plans for her.

When June boards the light rail home one day, she falls asleep and wakes up in a realm comprised of her own memories. Unable to escape, she’s guided by a younger version of herself, who she calls “Young June.” Although June is certain she wants to end her marriage, her younger self tries to convince her otherwise by showing her major events in her history with Eloise.

But as their journey continues, June grows more stubborn and fails to recognize her own mistakes. Will she ever own up to the things she did wrong? Will she want to reconcile with Eloise? Or is it too late? 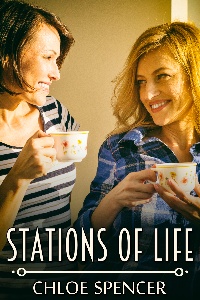 “I’m sorry, I don’t exactly know what to say. What are you supposed to say when the woman you’ve been with for twelve years wants to leave you?” She broke down, sobbing.

I uncomfortably waited for her cries to subside, but they didn’t.

“I’m coming by tonight around seven to get my stuff, and that’s it. I don’t want to talk about this anymore.”

Then I ended the call. I leaned back against my seat with a huff, and I closed my eyes. A few tears escaped. I didn't care. I had to leave in order for things to get better, and there was nothing that Eloise could say or do to change that.

When I opened my eyes again, I realized that the train had stopped. Outside the windows, I could only see fog. Weird. Was it raining outside? Why was there suddenly so much fog? Or wait, was that smoke?

Alarmed, I sprang to my feet, slinging my backpack around my shoulders. I ran over to the windows and peered through. No, that was definitely fog. It wasn’t thick enough or dark enough to be smoke. Plus, if the train was on fire, wouldn’t alarms be going off? Or wouldn’t the conductor come over the radio to say anything? This was spooky. A chill trickled down my spine. The old woman who had been sitting across from me was now gone, along with the young girl. Where had they gone?

As if in answer to my question, the doors of the train car opened. I immediately scrambled out of them, my heart nearly leaping out of my chest. I was standing on cracked concrete, traces of faded chalk etched onto its surface. The fog still surrounded me, so I could barely make anything out. I could see a shadow moving about just a few feet away. They moved slowly, almost as if they were stalking me.

“Hey!” I screeched, slinging my backpack in front of me like a shield. “Stay back!”

The figure held up its hands, and finally emerged through the fog. It was the young girl on the train. Her brown eyes were wide with fear.

“I don’t know. I was trying to get to the train conductor to figure out what’s going on. I think we’re the only two people here.”

“How? What? Did everyone else get off?”

She pouted. “I was playing on my Nintendo DS, so I wasn’t paying attention.”

“You didn’t notice that the train stopped?”

“I was in the middle of a battle with a gym leader.”

“Pokémon,” she said, irritated. “You know? Pokémon? One of the biggest franchises ever?”

“I know what Pokémon is. I just don’t understand how you could be so zonked out that you wouldn’t notice a train stopping in the middle of the track and getting engulfed in fog.”

I rolled my eyes. Clearly this obnoxious brat didn’t understand the urgency of the situation. “Do you know where we are? Did you see any street signs?”

She shrugged her shoulders.

“Really? You have no idea where we are?”

I pulled my backpack straps over my shoulders again and motioned for her to follow me into the fog.

I was probably dreaming. That seemed to be the only thing that made logical sense at this point. So the only thing left to do was follow the dream to its end, right?

We pushed through the fog for about five minutes, until it cleared. I could see the tall, red brick building looming before us. It’s tall black windows reflected white light; it was almost like looking at half-filled glasses of milk.

That’s when I recognized the building. This was Park Middle School. My middle school. This was where I met Eloise.