Kiwi Nathaniel Dunn is in a fighting mood, but how does a man fight Wellington's famous fog? In the last year, Nate's lost his longtime lover to boredom and his ten-year job to the economy. Now he's found a golden opportunity for employment where he can even use his artistic talent, but to get the job, he has to get to Christchurch today. Heavy fog means no flight, and the ticket agent is ignoring him to fawn over a beautiful but annoying, overly polite American man.

Rusty Beaumont can deal with a canceled flight, but the pushy Kiwi at the ticket counter is making it difficult for him to stay cool. The guy rubs him all the wrong ways despite his sexy working-man look, which Rusty notices even though he's not looking for a man to replace the fiancé who died two years ago. Yet when they're forced to share a table at the crowded airport café, Nate reveals the kind heart behind his grumpy façade. An earthquake, sex in the bush, and visits from Nate's belligerent ex turn a day of sightseeing into a slippery slope that just might land them in love. 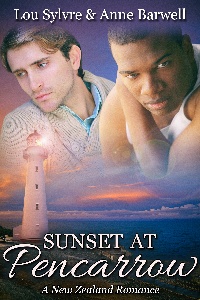 About that time, Rusty followed Nate onto an even narrower track that took off to the right -- the sign marking it as Browns Track. He had to pay attention to his footing now. The trail was truly steep -- muddy and slippery in places.

Immediately on thinking those words slippery in places, he felt like it was about something besides the muddy ground of the Orongorongo forest. He associated the phrase with his own intentions, coming out here with a man who -- okay, I'll admit he pulls at me like sex on toast. If he wasn't so sure he didn't want anybody, he'd think he wanted Nate. And yes, he knew he was skirting the truth.

Is that a rock in my shoe? Hard to think about anything else, really, with that irritant. He needed to do something about it. "Nate, hold up. I have a --"

A rolling blast of thunder cut his words short. In his mind's eye, he saw explosions all around him in a cornfield around a sleepy, dusty town in Helmand Province, Afghanistan. But he'd come a long way since leaving that year of his life behind, and he knew almost instantly that he wasn't there; the sound he heard wasn't war.

That made perfect sense -- especially as the ground suddenly lurched beneath Rusty's feet, knocking him off-balance. He fell forward, and gravity carried him downslope against Nate, who went down under him. Instinctively, he tried to shield Nate's head from hitting the hard ground, cradling it against his chest with his hands. The packs on their backs weren't bulky, but were enough of a lump to keep them from rolling far. Instead they slid, and by the time they came to a stop, they'd nearly reached the river.

Rusty lay still, concentrating on steadying his breath, but when he realized his body lay spread over Nate's like butter on bread, his heart took off racing all over again. Trying to rein in his senses -- ignore the feel of the man, the scent of him, the rush of his own blood heating his veins -- he pushed up onto his elbows.

"Are you all right?" he asked.

The breathy sound of Nate's voice seemed to belie his words, and Rusty turned sharply to meet Nate's gaze. He looked pissed again, and Rusty couldn't blame him. He pushed up farther, intending to rise and then help Nate to his feet. But from that slightly higher perspective, Rusty suddenly saw he'd been reading Nate all wrong.

Yeah, maybe there was anger in that smoldering gaze, but it wasn't anger at Rusty. The man's as hungry for me as I am for him! Rusty knew that without a doubt. Of all the incongruous things, he could even smell Nate's arousal mingling with his own. It smelled damn good.

He told himself his arousal was just a reaction to the shock of the quake, or it was from being thrust into proximity with Nate for the last twenty-four hours, or maybe he was hypersensitive, having gone so long without a man. He steeled himself to pull away from the man -- the damned desirable man -- who lay beneath him. But before he could put the intention to the test, Nate clutched the front of Rusty's shirt in one strong hand and brought the other one up under his jaw, either holding his head or caressing his face. God, it was a sexy move.

Nate spoke, his glorious green eyes widening as if he shocked himself with what he said. "It won't mean anything, right? It won't… change anything. It will just be sex."

How could the word "sex" harden Rusty's cock to the point of pain? But he knew the word was coincidental; it was Nate unleashing possibility that made him fall headfirst into the desire he'd been trying to hold at bay.

He glanced around. They'd ended up some yards from the trail behind a tall rock formation and some brush, which screened them from the path and the river -- and from anyone who might pass by. It seemed as if the earth had deliberately shaken things up, conspiring with fate to land them there. They were alone.

Nate let out a rush of heated breath, and seemingly the last of his inhibition flew away with it. He sat up long enough to strip the pack off his back and toss it aside, and Rusty did the same. Without any further warning or delay, Nate pulled him down and kissed him hard, smeared their lips together, licked across Rusty's mouth, plunged his tongue deep.

Rusty felt on fire, flame burning away every emotion but want. He vaguely realized he didn't usually want quite this hard, that the extremity of desire might have something to do with the nature and identity of the man he grappled with, but that was nothing more than a rumor behind the yearning that loomed huge, front and center.