Melinda is staying on Lindisfarne for a Christmas break with her old friend when an unexpected argument leaves her alone for the holiday.

It's the first Christmas since her mother died and the island's peace and wild tranquillity bring balm to her wounded heart. Two chance meetings, first with a pair of wary otters and then with cafe-owner Rowan, bring her genuine joy.

Will her tentative relationship with Rowan survive the end of her holiday and the turning of the year? 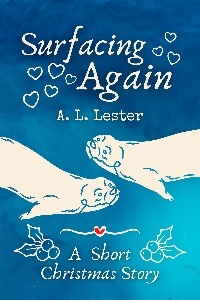 “You look like you could do with a hot drink. Your lips are blue,” the small woman wrapped in the huge green apron said. She was sweeping the windswept grey pavement outside the little cafe on the corner in the village as Melinda peered through the window at the menu, wondering whether they were open.

“Are you serving?” she asked.

The woman was about her own age, with a geometric blonde haircut and an impish expression as she looked at Lin over her broom.

“I’m not actually open for another couple of hours,” she said, smiling and leaning the broom against the wall. “But come inside while I set up. You must be frozen. It’s a bitter wind.”

Melinda smiled at her. “Why are you bothering to brush the pavement then?” she asked.

The other woman smiled again. “Habit,” she said. “It’s habit. I like my routines. Come on, come in. I’ve lit the log burner already, so it’s toasty inside.”

There were a couple of sofas set at angles in front of the log burner and a few small tables squeezed in around them. It really was a tiny cafe, probably converted from someone’s front room that had been knocked through into the room behind at some time in the past.

“Here,” her saviour said. “Sit down, take your coat off. “What would you like to drink? I’ve got ... well, anything really. Tea? Coffee? Hot chocolate?”

“Tea would be wonderful, actually,” Lin said. “I haven’t had any yet this morning. I got up early to watch the sunrise.” She was determined to make the most of her stay on the island of Lindisfarne, despite the drama of the last couple of days.

The other woman flashed her another grin before she could get too lost in her thoughts. “It was beautiful this morning,” she said. “I’m Rowan,” she said in a friendly fashion, going behind the counter and putting a kettle on.

“I’m Lin,” Melinda said. “Is this your place?” She hunched forward and stretched out her frosty hands to the fire.

“Yes. Me and my girlfriend started it a couple of years ago, but it’s just me now.” She shot Lin a sidelong glance.

“It’s tiny, but it works. I live upstairs.” She nodded toward the back of the cafe where there was a closed door beside the one that led out to the kitchen, presumably leading to some stairs. “We only do drinks and cakes, and soup and sandwiches and breakfast rolls; a very limited menu. But it’s all people need if they’ve come over to the island for the day. No-one wants to waste time with a full sit-down lunch.”

She put a tray with a pot of tea, a jug of milk, and two mugs down on the low table between the sofas, sinking into the one opposite Lin.

Lin nodded. “Yes, that makes sense. It’s quieter at this time of year, though?”

“Yes, very much so. Although it can get busy now for a bit, around Christmas. And people stay in the self-catering properties and guest houses all year round, obviously. If I didn’t need the income to live, I’d say I prefer it when it’s quieter.” She said that with an open smile. “Present company excepted, of course!”

She leaned forward and poured them each a cup of tea. She seemed to have all the time in the world to chat to a random stranger she’d rescued from the freezing morning.