Tessa Winthrop, an art restoration specialist, is hoping for the job of a lifetime—one which would cement her reputation in a field dominated by her male colleagues.

Working for Baron Lucien Stanhope—or Leo as he prefers—challenges Tess’s talent, intellect, and emotions. Leo is charming, handsome, and way out of her league. It doesn’t matter, though, because she only is there for her art and the mystery surrounding master painter Giovanni Remini.

When a night of passion leads to consequences that could mean the end of her career, Tess fears that the baron regrets having ever met her.

But fate has more in store for them, and sometimes regrets are the beginning of better things. 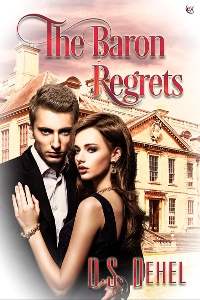 “The baron regrets that he is unable to attend today.” The man gestured towards an uncomfortable-looking chair sitting in the hallway. “If you wouldn’t mind waiting here a moment, Ms. Winthrop, I will ensure that we are ready to begin.”

Without so much as a second glance, the lawyer, Oscar Amisal, knocked once on the oak door and entered.

Tessa Winthrop sat and crossed her ankles as she had been repeatedly reminded to do. Sit like a lady. Cookie had chided her over and over again. Words that fell mostly on deaf ears.

Outwardly, Tess looked calm and collected. Inside, she was close to having a meltdown. The fact the baron would not be at her interview was a bad sign. A very bad sign. She surreptitiously wiped her palms on her skirt. Then she carefully made sure there was no residual sweat on her portfolio. She wondered if her hair was still neatly in its chignon but didn’t dare pull out a mirror. Although there was no one in the long hall, a high powered, influential law firm like Amisal, Bateman, and Reid would have cameras everywhere. And she did not want to appear prissy.

She followed an officious looking woman into a conference room. Around a large wooden table sat five men and one woman. All wore somber clothing and equally somber expressions. The pink of her dress suit glowed in comparison to their blacks and grays. She wondered if she had made a mistake wearing it, but then she immediately dismissed the idea. She was an artist, after all.

She quickly surveyed the faces watching her. Oscar Amisal, she knew from earlier. She also recognized Thierry Lamonde, a noted art historian. They had worked together in Italy on the Castello d’Abel project. He nodded at her, which soothed her frazzled nerves. The other faces she did not recognize. One man, seated at the end of the table, stared resolutely at his legal pad. When he looked up, she frowned before she could stop herself. What’s going on?

Oscar Amisal redirected her attention. “We have read your application and resume, Ms. Winthrop, and it is quite impressive. But then, so are the applications of your competition. What makes you think you should be hired?”

Breathe, Tess. “I have worked on murals by Giovanni Remini before, unlike the others who are pursuing this commission. Currently, I am finishing the restoration of his Lakeside View at the Chateau de Montfort. Over the past year, I have repaired and stabilized his works in Prague and Milan. I know Remini, and I can do what others cannot—rescue him from oblivion.”

She looked from face to face. Most were impassive, but one was sympathetic, and one was hostile. The man at the end glanced at her again, then went back to making notes or doodling.

The pugnacious one half raised his hand. “But you could not save them all.”

“That is true. His Ladies at Leisure had to be stabilized as best as possible, and Lord Westphal chose to have me remove and recreate the mural.”

“Then you cannot work miracles.”

The woman who had escorted her interrupted the surly man. “Yet, Mr. Ramirez is currently rescuing an equally damaged work in Amsterdam.”

“I know, but Mark will fail in his attempt, because he has not accounted for the temperature differences between the inner and the outer wall. It will last a year, at most, and then begin to come apart again.” She had told Mark time and again what was wrong with the murals, but he refused to listen.

Amisal flipped pages in the file. “You have degrees in Art History and Chemistry, an unusual combination.” His tone was dry.

Tess wasn’t sure whether or not he was trying to help her with the committee. “Perhaps, but I needed the chemistry background to assist with restoration. I also have advanced degrees in Fine Art and Historical Preservation.”

A gray-haired man spoke up. “The timeline for this project is quite tight. With your work in France, do you think you can meet the baron’s deadline?”

Tess ran her fingers over the monogrammed TWW on her well-worn portfolio. Do I give the answer they want or tell them the truth? “Until I do some preliminary work on the mural, I cannot say if I can or cannot meet that deadline. No one can. No one outside of the Stanhope family has seen the mural in twenty-five years. All anyone has to go on are photographs and newspaper reports from the Two-hundred-seventy-fifth celebration, and those are inconclusive.” She folded her hands on top of the portfolio. “As far as Montfort goes, the work is complete. All that is left is the grand re-opening of the chateau this coming weekend, and I promised the Comte de Montfort I would attend the soiree.”

The man at the end of the table looked up again, his expression hinting that perhaps the Comte wanted her there for other reasons.

Amisal took charge again, asking her about other work she had done over the past two years, and the compensation she desired for completing the project. It was a substantial sum, but less than she might make elsewhere.

He added some incentive. “As part of your salary, you would have the use of a cottage on the estate, as well as meals in the house if you would like.”

“Actually, that would be perfect. I hope I could have access to the house whenever I wanted, assuming it would not disturb the family.”