The Best Daughter Anyone Could Ask For

Denny Harper is in over his head. He’s raising his irate and ever-feisty teenage daughter, Mackenzie, by himself while his estranged wife breaks his heart over and over. When the father he never knew wills him a cabin by a Maine lake, Denny plans to take a week off and get the place ready to sell.

There are a lot of things Mackenzie doesn’t like, and change tops the list. But fate doesn’t ask her permission over her fourteenth summer. Denny soon finds himself struggling to guide her through an eclectic maelstrom of tragedy and hope for the future.

Change is a part of life, as Denny and Mackenzie find out through joy, heartache, and adaptation. When tragedy shakes Denny’s faith to the core, he finds out that Mackenzie is the best daughter anyone could ask for. 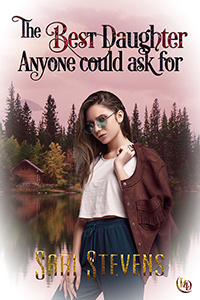 The Best Daughter Anyone Could Ask For

Denny Harper stood in the Young & Sweet Department at Miss Teen Fashion Apparel in the Maine Mall waiting for his daughter, Mackenzie, to come out of the dressing room. Surrounded by girl’s undergarments, he fixed his gaze on the busy aisle, but it did little to quell the feeling that everyone was watching him. Taking a breath, he leaned toward the hallway and cleared his throat, trying to project a soft tone. “How’s it going? I uh…kinda feel like a fish in a bowl.”

He sighed in relief at the click of a door. “Please tell me you’re done. I feel like a weirdo standing here.”

A skinny kid in a skirt and construction boots scrunched her cheek as she walked past. “Try not leaning on the girl’s underwear rack,” she wisecracked.

Denny cringed and jolted up straight, knocking over an armless mannequin in a flowered bikini. As he righted it, the callus of his hard-working hands caught the fabric and tugged the dainty top off one shoulder. With a nervous grunt, he slid it back down but abandoned the effort when a nearby pre-teen made a lemon-face and whispered to her mother.

Making haste for the aisle, he almost barreled over Mackenzie as she stomped out to toss a pile of clothes in the return bucket. “What’s wrong with the jeans?” he asked, regaining his balance.

“They look the same as the seventy-dollar ones, but the rhinestones are blue instead of pink.”

She rolled her eyes and huffed. “You caught me, Dad. I’m just trying to waste your money.”

“Look, sweetie. Get whichever pair you want. This whole shopping thing was never my strong point.”

“That’s why they put those benches near the registers. I can do this myself.”

“Oh, no. I’m not leaving a fourteen-year-old alone in this place. You may be a grouch, but you’re all I have.”

Mackenzie paused long enough to grind her teeth, then stomped her foot and tossed the jeans with blue rhinestones in their cart. “I need a bra, too.”

Denny pointed over his shoulder. “There’s a nice little rack over here.”

“You’re uh…not gonna take another half-hour in the dressing room, are you?”

She pulled one off the hanger and set it against her chest. “You want me to try it on out here?”

“Hey, wise guy, while you’re in there, try on that cute bathing suit over there.”

“The place your mom’s bringing you—”

“So do half my friends. Big whoop.”

“You’re trying to show Mom you buy me stuff,” she muttered, tapping away at her cell phone. “And she’s trying to impress me with her boyfriend’s money.”

Hugging her up to his side, Denny kissed the top of her head and tugged her long brown hair. “Nothing impresses you.”

Mackenzie resisted his embrace, but at half his mass, it did her no good. “Stop it!” She frowned and shot him an irate sneer as he let go. “Do that again, and I’ll scream and call you a stranger.”

“Go for it. I dare you. I’ll spend a few quiet hours in a little security office. Maybe I’ll download something to read while I save a few bucks on rhinestones. Heck, I won’t even admit I know ya till the mall closes.”

“That anxious to get rid of me, huh?”

“You told your counselor that living with me is like a father-daughter dance that never ends.”

“And you told me what I tell her is private.”

“You also told her you wanted a break.”

“From you, not my friends.” Her subtle pause signaled a hint of regret. Slumping forward, she went back to her tapping task. “You’re making this out to be a joke.”

“I’m trying to be light-hearted. None of it was my idea.”

“Then stop being so nice.” Shifting her square glasses, she wiped a tear and sniffled, then dropped her hazel gaze. “She’s not coming back. You can stop defending her.”

“I’m not defending her.”

“Yes, you are. No one asked me if any of this was okay. Mom left you, so I lost her. No one talks about that. Even my stupid counselor changes the subject. No one wants to talk about what matters to me.”

“I know what matters to you, but I can’t change what happened.”

“Me neither, so don’t expect me to care.”

“Why not? Why should she get off so easy? She’s just patronizing me. I haven’t even seen her since she introduced me to her last boyfriend. Now I’m supposed to care about Russ—Ross—whatever the hell his name is.”

Denny sighed and stroked her hair. “Hon, sometimes the awkward things are the most important.”

“My whole life is awkward. Why can’t she wait until summer’s over to take me?”

“So you can miss a week of school?”

“So I can hang out with my friends this summer.”

“All I’m saying is that you’ll grow up soon enough and decide these things on your own. For now, I want you to keep up a relationship with your mom.”

“You’re out of bounds, young lady.”

A sense of reprieve washed over Denny when his phone buzzed in his shirt pocket. As Mackenzie stomped down the dressing room hallway, he pulled the phone out and tapped the screen. “What is it, Mom?”

“A little huffy, are we?” his mother, Kelly, asked.

“Speaking, yes. It’s the terms I’m having trouble with. What’s up?”

“Well, speaking of fathers, we need to talk about yours.”

Denny gave his beard a nervous scratch. “You know where I stand. Just let me know when he’s gone.” As he waited for a response that never came, a lump of finality tightened his throat. “I-I, uh…what happened?”

“What happened is he got off easy. His heart stopped, and he was dead before he hit the floor. The doc called it a widow-maker…only there was no one to make a widow of.”

“Not as surprised as he was, I’ll bet. The damn fool ran a mile every morning.”

“I didn’t know you kept in touch.”

“I didn’t, but your cousins did. I thought one of them would have told you so you could make the service.”

“Yesterday. You’re off the hook. They probably didn’t tell you out of spite. They’re pretty mad at you.”

“Why? Have they been talking to Mackenzie?”

“Denny, you do know you were his sole beneficiary, right?”

Surprised, he paused for several moments. “I do now.”

“Well, don’t buy any fancy cars. About all he had was that cabin up on Taylor Lake, but once it clears probate, you own it. Last I saw, it looked like a rummage sale. Nonetheless, you may want to get up there to go through the place before Tommy and Grant take everything of value…if they haven’t already.”

“Thanks, Mom. I’ll call you from home.” Ending the call, he leaned into the hallway. “Are you gonna get that suit or not?”

Mackenzie flung the door open and stormed out, bra in hand. “Do you have to put every call on speaker?”

Denny huffed and stared at his phone. “I’m gonna need some cooperation. You may have to stay with Mom for a while after you get back from what’s-its-place. Either that or you can go back and forth to the cabin with me.”