The Burdens of Truth (MM)

Professor and secret government analyst Ian Sanderson's bad day gets worse when he arrives home one miserable November evening to find an apparently incriminating photograph in a FedEx envelope in his doorway, followed by increasingly threatening photographs over the next two or three weeks. It isn't just Ian being set up: his partner, Randy, a lieutenant colonel working on a top-secret Pentagon project, is also at risk. Someone obviously wants something, but what? And from whom?

Soon, a mysterious caller demands that Randy disclose information about the project he's been working on. When he refuses, Ian's and Randy's sons, David and Paul, are kidnapped from an Amtrak passenger train. Resourceful and intelligent, the boys manage to escape-only to find themselves lost and alone in a remote wilderness. With time running out, can Ian and Randy track down their blackmailers? Or will the man known only as The Broker claim another set of victims? 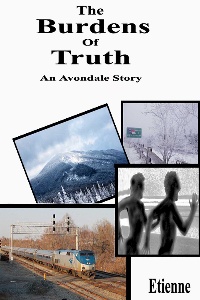 The Burdens of Truth (MM)

Sunday morning, we walked into the living room of the suite, ready to go downstairs for breakfast. There were no sounds coming from the boys’ room, so I went to tap on their door and found, to my surprise, that it was slightly ajar. I pushed it open a couple of inches and listened for sounds of life; then I noticed the reflection in the mirror of their room, which I could see clearly from the partially opened door. I turned, pressed my fingers to my lips, and motioned Randy over to where I stood. When he was standing beside me in the doorway, he looked a question at me. I pointed and whispered, “Look in the mirror.”

His eyes grew big; then he pushed the door open and marched into the room with me following. Sean and Paul were in one of the beds, their naked bodies spooned tightly together. I cleared my throat and said, “I hope you guys aren’t this careless in your barracks. If you are, you’re liable to get yourselves kicked out of school.”

They jumped up from the bed as though shot from cannons, and Randy said, “Babe, this wasn’t careless, this was staged.”

“Yeah. Look at those shit-eating grins. They planned for us to catch them like this.”

“If that’s true, they certainly succeeded,” I said. “Why don’t you guys put on some clothes and come into the living room? It seems we have something to talk about.”

We returned to the living room, sat side by side on one of the two sofas, and waited. A couple of minutes later, Sean and Paul appeared clad in boxers and T-shirts. I pointed at the other sofa and said, “Sit.”

“Okay, guys,” Randy said. “If this was show and tell, we’ve certainly been shown, so it’s time to tell. How long has this been going on?”

“A little over four years,” Sean said. “Ever since that time we all went skinny-dipping for the first time.”

“Yeah,” Paul said. “Something happened that week, and Sean and I figured out how we really felt about each other.”

“Does anybody else know?” I said.

“Are you kidding?” Sean said. “We never told anyone in high school, and we certainly don’t talk about it at The Citadel.”

“Yeah,” Paul said. “Even though we’re pretty sure that at least two of our classmates are gay, it’s one of those things you simply don’t mention. You were there -- you know how it is.”

“No fear,” Paul said. “Students are required to keep their doors locked at night, and we take extra precautions.”

“Our door is locked from the inside,” Sean said, “and a chair is propped up against it. If anybody used a passkey to open the door, it’d make one hell of a racket.”

“One question,” Randy said. “Both of you have always been close to Ian and myself, so why not just tell us outright?”

“Let me see,” I said. “It went something like this: ‘Some truths can be a burden not easily shared; because to do so, the soul must first be bared’, or words to that effect.”

“Yeah,” Sean said, “is that the only poem you ever wrote?”

No, but it’s the only one I remember clearly.”

“Wait a minute,” Paul said. “Dad, you called Uncle Ian ‘babe’ when you guys were in our room just now.”