The Captain Claims His Goddess (MF)

The Shifters of Freedom Springs 5

The Captain Claims His Goddess (MF)

The Shifters of Freedom Springs 5

She was thankful her surprise had held her still as the bear suddenly ambled back into view. It made strange chuffing noises in its chest and threw its head from side to side, inhaling great gusts of air as if it were actually tasting the air, trying to catch a scent.

Olwen closed her eyes as she realized it was, in fact, tracking her. If she couldn’t convince this majestic and beautiful beast to move on quickly in search of different prey then she was going to have to kill it. As she contemplated just how on earth she was going to do that, the bear’s head swung up and looked directly at her.

“Wow,” she whispered as the bear’s eyes locked on hers. It was the most surreal moment of her life, and considering she was a goddess who had lived in the prison of a demon with a god complex the size of Texas, orchestrating her rescue across realms and through time, that was saying something!

She saw that there was blood around its snout and surmised that, at some point, this bear had eaten something. Or someone. So perhaps it was not tracking her for an evening meal after all. Perplexed, she continued to stare into the dark eyes of the black bear, struck by how beautiful they were. She watched as it seemed to rock from side to side, eyeing her at the top of the tree. It made strange huffing noises before rising up onto its hind legs.

The bear walked over to her tree, surprisingly steadily, considering it was on two feet. The tree moved alarmingly when it placed its front paws on the tree and shook it.

Olwen gasped in alarm. “Stop! Do you want me to fall?” As if the bear understood every word, it stopped shaking the tree and gave her what she could only classify as an extremely sheepish bear grin. What in the name of all the gods is going here?

“Olwen.” Rohan’s voice sounded in her head and she gasped. Her hand lifted immediately to her chest to ease the ache the sound of it brought with it, and tears flooded her eyes. “Come to me, beloved. It has been so long.”

“Rohan.” Olwen heard the tears in her own voice and loved the immediate wave of reassurance that flooded back to her. “I am, my love. I am coming to you. I just have a slight situation I need to deal with and then I will continue to make my way to you. Just hold on.”

The bear seemed to swell as its eyes narrowed and its gaze shifted to the forest around them. Then it dropped to all fours, rumbling a warning growl again and walking around the trunk of the tree, swinging its head in a display that clearly communicated it was not an animal to mess with.

“What sort of situation? I thought I had removed the threat to you. Where are they? Can you see them?” Rohan asked, his voice deeper and, well, growlier than she had ever heard before.

“How could you have removed the threat to me? How in the hell did you even know I was back in the Otherworld?”

“I felt you the moment you arrived back in the Otherworld.” Olwen felt her body heat at the thought of her man being so connected to her that he sensed her very presence. “Argon felt it, too, and sent a while fucking squadron of Uruheim fighters after you.” Huh. Hearing that her sister was just as connected didn’t do anything for her.

“And you removed them? How?”

“I tracked them through the forest and ripped them limb from limb. It was very therapeutic.” There was smug satisfaction in his voice, and Olwen heard the bear chuff what sounded like a laugh at the same time. A sudden, unexpected conclusion came to her and she sat back in a state of shock. “Olwen! What happened? I felt you react to something. Are you okay? For the love of the gods, will you please bring your sweet, beautiful ass down out of that fucking tree and let me protect you?”

Olwen’s jaw dropped, and she wouldn’t have been surprised if the bottom of it hit the actual forest floor. Somehow, someway, her beloved Rohan had been turned into a bear shifter, and he was standing at the bottom of the very tree she was currently sitting in.

“Olwen?” This time, Rohan sounded hesitant and worried. “Does my appearance shock you? Or…Oh hell, do I disgust you in this form, my love? I do not know the nature of the beast I have become, but I am forever grateful to the change for my freedom.”

As if his hesitation and vulnerability were a signal to move, she leaped from her hiding place and headed for the ground as fast as she could.

Rohan’s heart turned over that the heartfelt plea. He knew he would have to deal with the guilt and pain she harbored, taking on all the blame for what they had endured in this godforsaken realm, but it was a guilt wrongly placed. He had never harbored any blame toward this beautiful woman for anything that had happened to him, and one day, if he had his way, he would prove that to her.

He knelt on the bed and crawled up to her, loving the fact that she parted her thighs so swiftly and naturally to make a space for him to nestle between them. When he lowered his body to lay flush against her, the underside of his hard cock rubbed against the hot, wet opening of her pussy, making them both moan at the contact. The feeling was so damn pleasurable that he rolled his hips a couple of times just to feel it again.

Pushing up slightly, he moved the head of his cock, pressed against the swollen lips of her pussy. He had to hold himself completely still to remain in control. He had the feeling that if he had allowed himself to slip inside her by the barest inch, he would have slammed into her.

Exhaling slowly, he looked up to lock his gaze with hers. “You will never have to ask me twice to make love to you, my goddess. This is the first time I will take you, the first of many times I will show you the pleasure a man can give his woman. I will be the first man to take you, and you can sure as hell bet I will be the last. Watch me take you, my love. This moment is the single best moment of my life, and I want you to watch it.”

Rohan had no idea where this daring streak of his came from, but he figured, by the way Olwen’s heart rate accelerated and her breathing became even more of a pant, his soon-to-be-mate loved it just as much as he did. As soon as he watched her gaze slip down to where they were about to be joined, Rohan rolled his hips so that the head of his cock slipped inside her.

“Oh my,” Olwen whispered as her legs lifted naturally to cross across his ass, causing him to slip another inch or two within her hot caress and his damn eyes to cross. He rushed forward again, watching her face for any sign of discomfort. He had surprised the hell out of himself when he’d had the presence of mind to stretch her a little when he had tasted her to try to limit the pain of this first time.

Pushing forward, he tried counting backward from ten in Latin to take his mind off the fact that Olwen, the woman he loved, was currently lying beneath him, and he was about to be buried balls-deep within her. His control shattered when she suddenly snapped her own hips forward, slamming them together and taking him to the hilt.

“Fuck!” he groaned as he threw his head back. He heard Olwen moan and ice water filled his veins. Damn it! He had been so lost in his own passionate response he had not thought about how it might have hurt her. Calling himself all kinds of names, he began to withdraw slowly, not wanting to cause her any more pain.

“Oh, gods,” Olwen moaned, reaching her hands up around his shoulders and making him shudder by dragging her nails down his back. “That feels so damn good! Do it again, take me, Rohan. I love the feel of you hard and full within me, but I want it harder. I need it harder. Fuck me, my mate!”

Rohan had a moment of pure shock that his mate would not only love the way he took her but would want him to take her harder and faster. She truly was his perfect woman. Then he was moving, lifting up onto his arms to give him leverage to take her the way she seemed hell-bent to drive him to. He began slamming his hips into hers, his eyes drawn to the way the sudden impact had the perfect globes of her breasts bouncing enticingly.

“Christ, Olwen, you look so damn beautiful when your body reacts to my possession, and that is what this is, my love. I am taking you completely.” Rohan’s voice was harsh and interspersed with large, panting breaths as he fought to draw air into his lungs. He lost his steady rhythm moments later and was simply pounding into her, reveling in the sounds of pleasure she made, and the eager way she moved her hips and hands as if to draw him closer to her.

He felt a tingling in the base of his spine and knew that sensation meant his release was not far away. He watched her face and saw the need and desperation in her widened eyes, her mouth held in open in awe, and he saw the moment she gave into the sensations and came. 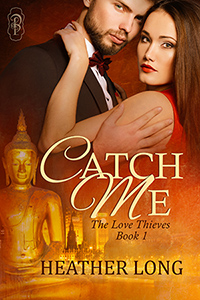