Ellie Murphy takes a contract teaching English at a school in Venice, Italy. There she meets the sexy enigmatic Professor Piero Contarini, from an ancient Venetian family, and agrees to help him in his work curating a new edition of the memoirs of the famous seducer, Giacomo Casanova. Taking their task seriously, they start to enact his adventures with each other, ecstatically revealing their own kinks as they do so. But who is watching them from the shadowy alleyways of Venice? 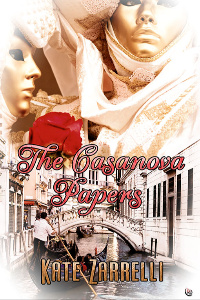 Ellie settled into a window seat on the airport coach and gazed down at the overtaking cars, indulging in one of her favourite fantasies. She looked out for male commuters, driving alone, men she never saw anything of but their hands. They had to be smartly dressed—she wasn’t bothered if the car a man drove was high-end, but he needed to look like he was—a crisp white shirt, cuff-links, and then the hand itself.

There’s a good one. I just love that network of strong tendons, long fingers, square-cut, clean nails—commanding hands. Ellie observed the way the hand nearest to her rested on the steering wheel, not clenching it nor tapping it—just in control. She was looking at just such a hand now, committing it to memory. As the car gained on the coach and disappeared down the lane ahead, she shut her eyes. It was early morning, and most of the coach was asleep, but Ellie wasn’t going to join them. Her eyes shut, her head comfortably pillowed by her hair, she smiled to herself as in her mind’s eye she saw herself walk out of a marble-lined bathroom, totally naked, and fresh from a tingling shower. Oblivious to the roar of traffic and the rain that now spattered the coach windows, the Ellie of her imagination lay down on the turned-back bed in that luxurious room. With her head resting on a tumble of cushions, she raised her arms submissively above her head, and parted her legs.

With you, I have no shame.

The man sitting in the armchair facing the bed got to his feet in one relaxed, sinuous movement. Watching from beneath half-shut eyelids, Ellie saw that hand, the same one that was by now three miles further down the motorway, loosen the knot of the silk tie and then go to the fly of the fine wool of the suit trousers. In a swift movement he eased the tumescence within upwards.

Ellie realised she had moaned aloud for all the bus to hear. Hell, let them think I’m dreaming. I am.

She couldn’t describe the face of the man in her fantasy properly, but she knew he was dark, clean-shaven, and could make her wet just by giving her his lop-sided smile. With her eyes tightly shut, she saw him close to her now—she imagined she could smell the tang of aftershave. Something expensive. You’re good enough to eat, she thought.

He obviously thought the same way about her. That hand was exploring her now, separating the delicate petals of her stiffening vulva, his fingers wet with her juice. Sitting there alone on the blue flock of the coach seat, with her eyes closed, Ellie squirmed in anticipation. Back in the dream the well-dressed stranger had put his hands under her buttocks and was easing her towards the edge of the bed. Now he was kneeling. She saw the flash of his beautiful white teeth, his head framed by the V of her parted knees, the tip of his tongue, and shivered in anticipation—

“We are now approaching North Terminal,” blared out the intercom of the coach. Damn! Ellie’s eyes flicked open in her heated face. Still, she knew that even after she had gone by bag-drop, negotiated security, eaten some breakfast, and finally gotten on the flight to Venice and settled into her favoured window-seat, the well-dressed stranger and his questing tongue would be waiting for her the moment she shut her eyes. The flight attendant would say, “We’d like to wish you a pleasant flight.” Oh yes, it will be.

Weary, Ellie climbed down from the coach at Piazzale Roma. One day, when I’m rich, she told herself, I’ll come to this city the way you should, by water. She’d looked up the prices of a water taxi that would have brought her right to the beating heart of the city, onto the Molo at Piazza San Marco, so that the bell-tower, St. Mark’s and the Doges’ Palace were right before her eyes when she disembarked. No, a taxi was too expensive for a young language teacher, no matter how prestigious the school.

Her new employers were helping her in so many ways, though. Accommodation was provided close by the school, in the University district. This was no mean advantage when rents were skyrocketing and every third apartment, it seemed, was being turned into a tourist rental by absentee landlords.

“Ellie!” said a friendly voice. She turned and was greeted by Maria Salvi, the vice-principal of the school. This handsome middle-aged lady was elegantly dressed, and she had a way of carrying herself that to Ellie looked uniquely Venetian. Ellie felt crumpled and travel worn. I wonder if I will ever learn to look like that.

Maria leaned forward and kissed Ellie on both cheeks in the Italian way, enveloping her in an exquisite citrus perfume.

“I’ll take you to your home,” she said, “then I’ll leave you to settle in. I’ll call back for you this evening and take you to dinner.” Ellie smiled her gratitude. How was it that Maria had guessed exactly what she wanted?