Hunter Brynwar is a young half-elf ready to take his first step as a Ranger in the twilight world of Aria. To do this, he must gain an animal companion who will serve by his side until death. A test awaits Hunter as a growing darkness threatens to consume the forest he loves into a mockery of its current majesty. As a Dark Druid plants the seeds of darkness within the forest, Hunter must bond with his companion and destroy the evil before it takes over the forest. As stars fall from the sky as a warning, Hunter knows he’s ready, but he must remain strong, so the dark doesn’t consume him. 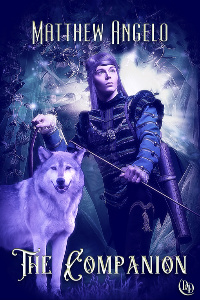 The twilight sky lit up with the light of a thousand stars. Their twinkling brightness separated the world I lived in from the darkness that threatened to choke out the light. The seven moons that danced in the heavens in all their glory reflected light from a distant star to cast shadows over the land.

It was said the gods and goddesses of Aria made their homes among the moon and their powers ebbed and flowed with the waxing and waning of the moons. The only moon always full was Darube, home of Arcanus, the God of Magic and Neutrality. The High Gods, The Keeper and The Taker, didn’t reside on this plane. Philosophers world-wide would argue on where they lived, but only they cared as the people of our world had more important things to worry about. With a step back, I held my breath as another star streaked across the sky.

A hand grasped my shoulder. “Two in one night. The priests of Sirenia would call this a bad omen.”

It was Garrett Von Dell, my mentor and teacher. He had trained me since taking me in as a child in the ways of the Ranger. To him, the code was all that mattered when it came to helping nature and protecting her forests and animals. Garrett instilled this code in me, and it has served me well.

His facial expression told me all I needed to know about the falling stars. He believed in signs and omens, and I couldn’t blame him. The elven blood in my body, though mixed with human, still burned with the magic of my people. It burned in response to the sight of the stars. Wizards and clerics weren’t the only ones to trust the skies for portents and other matters of divination. Rangers at times relied on them as well and some held druidic abilities to fight enemies of the forest and world of Aria.

I turned toward him and glanced at the horizon behind him. “They say the heavens will fill the sky with signs and wonder. This could only be a celestial wonder, Garrett. I will say, whether these are an omen is hard to tell, but a darkness grows in these woods.”

A shiver rippled through my body at the thought. No matter what I could do, a cold presence inside me lay like a stone at the center of my soul. The first day I would have tried as a Ranger, it’d be here, near something evil.

Garrett drew his sword before sitting. “Has the Goddess Nexus stared into your soul? If so, you lived to tell about it, Hunter. What is it you see or sense? Your feelings have always led you well.”

I glanced at him, and he frowned. “My training under you has honed these feelings. Aria speaks and has helped me focus and gives me the courage to trust my senses more.”

He shifted to the left a few inches. Not much, but enough to show his uneasiness. “Aye. A Ranger needs this power. All of us have it, but yours is stronger than most. I say it's the elven blood. Your connection to the world of Aria runs through your veins.”

I knew it made him uncomfortable, but not so much as to fear it. His patience as a human bordered on god-like in teaching a young half-elf. No one ever treated me as an equal as him nor with the same amount of respect. If the elves hold any human in high regard, then Garrett would take that place.

I turned toward him grinning. “It is the elven blood. Not all of us are lucky enough to have it.”

Garrett laughed. “Ha! A gift for some, a curse to others, Hunter.”

I frowned. He caught my look and dropped his smile. “Sorry, Hunter. It seems after all these years of knowing you, I still fail to acknowledge your lineage.”

“You’re forgiven. I can’t fault you in what you said. For me, it’s a blessing and a curse. If only it wouldn’t threaten to tear apart my sanity.”

He stood and paused before approaching. Garrett gripped my shoulder again and raised an eyebrow. “Hunter, you’re far from losing any of that. I’ve met no man, nor elf, that’s better than you. Bloodlines don’t make the man, but his actions and integrity do. Now, my friend and apprentice, are you ready to find an animal companion?”