The Girl with the Green Hair

Can Aaron and Sally overcome the doubts and misconceptions that they have about each other?

Both Sally Bradshaw, a professional interpreter, and Aaron Hastings, a wealthy lawyer, are guilty of making wrong assumptions about each other after meeting at a disco bar. Colored wigs, food poisoning, drink spiking with a date-rape drug, and a police lineup only add to their confusion.

When Sally and some other ladies were out celebrating her cousin’s birthday their drinks were spiked, and Sally wrongly thinks Aaron is one of the men responsible. Meanwhile, he assumes she’s a prostitute after the suggestive way she danced with him, and the fact that she almost immediately gave him—a virtual stranger—her address with an invitation to visit.

For some odd reason, their paths continue to cross. And even though neither one of them particularly likes the other, they both feel a strong attraction. But it may be an attraction they’re not able to explore, because to add to this dilemma, they’re both involved with other people. 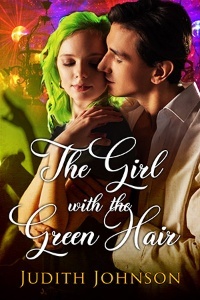 The Girl with the Green Hair

Sally’s cousin looked at her from the bedroom door. “You look terrible. You’re only one shade lighter than those green sheets.”

Sally pulled the corner of the sheet over her face then groaned loudly as again the sound of the doorbell ricocheted from wall to wall. She was quite sure a cricket ball slammed against a corrugated tin shed couldn’t make a bigger din.

“I’ll get rid of them,” Dot said, quietly closing the door.

Sally, with her eyes shut tight, hoping for blessed oblivion, wasn’t sure her cousin had even left the room when she was back.

“There’s an Aaron Hastings here asking for you,” Dot said in hushed tones.

“Never heard of him.”

“He was decidedly forceful about seeing you. Insisted I let him in.”

Sally struggled up on her elbows. “And you did?”

Her cousin gave an ineffectual shrug, making Sally flop back on the bed.

“Some administering angel you are,” Sally muttered.

“I didn’t seem to have much choice. He just stepped through the door, so you will have to deal with him. Here, let me help you.” Dot came to slowly pull Sally up to sitting on the side of the bed. “Brush your hair while I put the kettle on.”

“You haven’t seen him. But you must have, seeing he’s here asking for you.” Dot’s appreciative growl as she left the room made Sally wonder who, or what, could be waiting for her.

Anyway, she shouldn’t even be tempted to look. Never thought she would be. She was quite content with the arrangement between her and Ian of marrying in twelve months when they had saved more money. Which was the reason she had applied for this new posting in Sydney—at Ian’s insistence.

As she pulled the brush through her tangled hair the room gave a peculiar spin, making her groan. Even her hair hurt! She dropped the brush on the bed. Perhaps the exotic concoctions their group had consumed on Friday night could lay claim to her thumping head, but they weren’t entirely to blame for the bilious attack.

It was food poisoning.

Lily had to go to Outpatients at the hospital then rang in a panic to warn what might be in store for her. Sally’s mad dash to the toilet in the middle of her cousin’s phone call had confirmed the diagnosis.

“I don’t know an Aaron,” Sally muttered as she took a deep breath and slowly stood up, pleased she didn’t fall back into the tangled sheets. She felt so weak. But she needed to find some clothes to get dressed. The cream cotton-knit jumper she pulled over her green and pink striped pajama top hung limply, mirroring exactly how she felt. Her frayed-knee jeans added to the picture of some poor, underfed street urchin.

But why care how she looked? She didn’t know this man. This Aaron…something!

About to step from the bedroom, her absence of shoes stopped her. If it meant bending over to search the bottom of the wardrobe for her slippers, she knew the lurking headache would start thumping again. Feeling as she did she would probably end up as part of the assorted mess claiming possession of the bottom of her cupboard.

She would give it a miss; bare feet it would have to be.

Taking a deep breath, hoping it might give her more strength, she gingerly walked into the hall. It felt like the floor was sliding back and forth, and she reached for the wall, letting her hand slide along it as a confidence booster that she wouldn’t fall flat on her face.

The man she saw made her come to an abrupt halt. Her fingers curled around the edge of the lounge room door.

No wonder Dot had growled.

And Sally wasn’t too ill to decide he was definitely the type that was dangerous to any female’s peace of mind. She had never seen him before. Well over six feet with light olive skin, his hair black as ink, slanting high cheekbones, and a sensual bottom lip, he was broodingly sexy. His face so boldly defined, it was almost ruthless.

She watched his black eyebrows dive into a sudden frown and his dark blue eyes narrowed. “Sorry I’m late. You did say ten, and it’s almost ten-thirty.”

“Late?” Sally heard herself ask through a fog of incomprehension, wanting for an explanation as to why this imposing man was standing there—in front of her—as if he had every right to be in her brother’s lounge room.

She looked like a ghost, her huge gray eyes taking up most of her face—and that was the only thing Aaron did recognize about her.

Where was her green hair?

He’d expected at least sexy, skin-tight leggings, or a pelmet skirt, not baggy, torn jeans. She looked like some third-world starving waif with that cream thing covering the curves she had tortured him with—which, under further scrutiny, seemed to have completely disappeared. What was happening here?

He wished he’d stayed in his car, and frankly, he wasn’t sure it would still be there when he returned. It was partly the reason he was thirty minutes late, sitting there, trying to come to terms with why he was here at all. In this questionable suburb.

Where he had no right to be.

He must be mad!

Now seeing her, he was sure he had gone mad.

He felt uncomfortable—nervous, of all things, and this pitiful urchin, for some reason, was responsible.

“You invited me,” he stated with curt, condemning words. 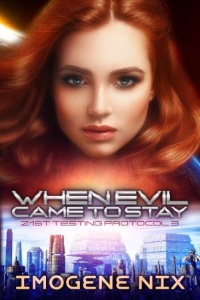 When Evil Came to Stay
Imogene Nix
In Shelf
$0.99
Tweets by
sirenbookstrand