The Heart Of The Dragon Bundle 1

Wynter is a half-elf torn by his dark and mysterious past and his love for the elf maiden Arianna. As their travels lead them through the twilight world of Aria, a prophecy speaks of challenging the gods. While evil, once asleep, will test his  love for Arianna and the world he lives in. With every turn, their challenges grow dark, and hope seems to dim as the oceans and skies themselves threaten to overwhelm Wynter and Arianna.

As the chains of darkness close quickly and traps are set, Wynter must prove that his love for Arianna is stronger than ever. With a global war on the horizon, and the elves retreating from the world, Wynter realizes the great balance has shifted, and good is close to becoming lost.

With magic that hasn’t been seen for centuries and love that will test the power of the gods, Wynter enlists the aid of others and welcomes a prophecy that he was fated to lead. 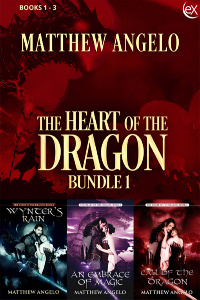 The Heart Of The Dragon Bundle 1

Wynter's Rain
The Heart of the Dragon Book 1

Wynter is a half-elven warrior haunted by his past and his love for the beautiful elven priestess Arianna. He must fight through monsters and the red dragon Brimstone while confronting the demons of his past and the mystery of a dragon-inscribed pendent to not only survive the day, but save Arianna from the evil that surrounds them. It will take his skill with the sword Dragon’s Bane, his innate use of magic, and Arianna at his side to conquer the darkness that threatens to tear him apart. Only the love of Arianna can melt his frozen heart and save him.

An Embrace of Magic
The Heart of the Dragon Book 2

A half-elven warrior-mage must embrace the power within him and his love for a beautiful elf priestess before retrieving the ancient artifact called the Dragon Mask to unlock the secrets of his past and save the world from an evil so great, even the gods are threatened by its power.

As Wynter’s love for Arianna grows, so does the danger they both are in. While learning about the mysterious Dragon Pendant, he uncovers the relic known as the Dragon Mask, which is tied to the pendant and the sword Dragon’s Bane, that he carries. In the belief that it will help him understand how he is linked to these items as well as his past that he carries, Wynter and Arianna are swept up in a mysterious Dragon Cult. Their travels take them to the Kraag Mountains that hold the Dragon Mask.

On the way to retrieve the mask, Wynter’s love for Arianna and his sanity are challenged as he must face the great serpent the Hydrus, suffer terrifying visions of the future, and finally face the dark elven wizard Szordrin in a fight that will force Wynter to embrace his magic in ways he never has before. The only thing he knows for sure is that his love for the elven priestess Arianna will keep him from giving up, and keep the world and the gods from falling into darkness forever.

A half-elven warrior must battle the growing darkness in the world of Aria with the love of an elven priestess as he embarks on a dangerous quest to enlist the aid of good dragons to save the world.

Wynter’s love for Arianna has grown stronger, and so has the danger. Wynter comes to realize that the Order of Draconis is much larger than he realizes. Hearing a distant and unfamiliar voice, and having stalled the Order’s plans, he finds their troubles are far from over. With imprisonment in the city of Eden a fear and the king under the control of a necromancer named Jal-eck Thar, Wynter realizes that he must flee the city and get to the Twilight Isles to enlist the help of the good dragons as the elves withdraw from the world and before war ravages the lands. Wynter and Arianna must prove that their love is strong enough to survive as the safety of the world hangs in the balance.