Justine is at the most boring conference in the world in a hotel from the 1970s with its décor falling apart. The only bright spot on the horizon is Julian, her sexy boss, the man who fills a suit like no other. Soon she finds out her colleague Michael has designs on Julian too and wants to rope Justine in to seducing him that very night. Justine has no idea which way Julian swings. She’s intimidated by her boss but Michael has balls enough for both of them… 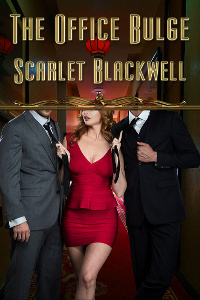 Justine dumped her bag on the bed and glanced around the poky little room. The hotel was in severe need of an overhaul. The décor came from the 1970s—the designer might as well have put his flares and kipper ties on the walls.

She sighed, unzipped the suitcase and started to unpack clothes, hanging up her dress for that evening in the wardrobe.

Her boss had told their posse of twelve as they checked in that they had exactly thirty minutes before he expected them down in the conference room ready to begin their day.

She’d been up since seven o’clock and endured an arduous train journey. The only thing she was ready for was bed.

Quickly, she touched up her makeup, filled a glass with water from the bathroom tap and drank thirstily. Wearing jeans to travel in, she now changed to her smart business suit and added high heels and a pair of lace-top stockings.

She made it downstairs with her briefcase and hurried into the giant conference hall. She found her seat one up from her boss, three rows from the front.

She stole a sly glance at his chiselled profile, watching lush lashes blinking over sapphire blue eyes. Justine swallowed, wetting her lips. Her gaze slid down her boss’s hard, worked-out body in its immaculately tailored pinstriped suit. His shirt collar was pristine white against his creamy skin. The cuffs carried studded links that looked like real diamonds. She didn’t doubt they were. After all, he earned a six-figure sum and drove a Ferrari.

She liked to think her fascination for him wasn’t about the size of his wallet but the size of something else. Her eyes dropped lower. He lounged in his chair with knees apart, jacket open, the bulge in his well-fitted pants obvious. Justine’s gaze lingered. People at work talked about The Office Bulge in reverential tones. Women asked the men if they’d ever stood next to Julian at the urinal. No one ever had, or maybe they just didn’t want to gossip about their boss. Sometimes when talking with her in his office, Julian would perch on his desk in front of her. Almost at eye level with his groin, she’d try not to look and flush helplessly when she did.

As someone brushed against her knee, she tore herself away reluctantly.

“Hey.” Her colleague, Michael, dropped into the seat between her and Julian.

“Hi, Michael.” Justine rubbed suddenly damp palms over her skirt. She crossed her legs and noticed Julian lean past Michael to take in the curve of her calves.

Dressed like this was how her boss recognised her. When he’d seen her in the lobby in jeans and trainers, he’d done a double take as though not sure who she was. She’d felt dowdy, conspicuous, and she’d longed for the glamour of her suit. Now she revelled in his gaze. She’d never caught him looking at her like this before. It felt good. Really good.

Julian lifted his eyes to hers. For a moment he regarded her, his handsome face inscrutable before he looked away.

Michael raised an eyebrow at her. Justine blushed and fanned her face with the conference’s programme.

God, the things that man did to her. She fantasised about Julian. All sorts of stuff: asking her to work late, just the two of them, calling her into his office and punishing her for some transgression, face down over his desk.

She wondered sometimes how she could look Julian in the eye with some of the thoughts she had about him.

A squeal of feedback announced the first speaker. The lights grew dim, and Justine cast another secretive glance at Julian. He stared straight ahead, as though the man currently presenting on growth trends in the company’s new brand of luxury pâté cat foods was the most exciting thing he’d ever heard.

Justine stifled a sigh. She looked at Michael and noticed he wasn’t paying attention. Indeed, his glance was fixed where Justine’s had previously been—riveted on Julian’s crotch.

An odd stab of jealousy went through her. Michael had a crush on Julian, too? Her colleague, lean, blond and pretty, was clearly gay, but was Julian? For sure, her boss was groomed to within an inch of his life, his black hair gleaming with styling products, always immaculately shaved, the alluring whiff of his outrageously expensive aftershave drifting down the aisle, but did that mean he’d prefer Michael to her?

Justine folded her arms and pouted a little. Knowing she had a cat in hell’s chance with her divine boss was made even sourer by the idea that maybe he batted for the other team anyway.

She leaned close to Michael’s ear and whispered, “Put your eyes back in.”

Michael coughed. He grinned, glancing from the corner of his eye. “I could have said the same to you. It’s the only thing worth looking at in this fucking dump.”

Julian leaned forwards abruptly from his chair. His cold expression swept between Justine and Michael. “I’m sorry,” he said, “are we keeping you from your social club?”

“Sorry,” Michael muttered while Justine fixed her gaze rigidly on the presenter. Julian always made her feel like a naughty child at school. Sometimes she hated him as much as she lusted after him. She wondered what he’d say if he knew the subject they’d been discussing was what he was packing in those pinstriped pants.