When events occur that force London attorney Ray Telor to take a vacation, he heads to a faraway village he’d never heard of before. Aesil is peaceful, lovely, and a world lost in time. Ray is instantly charmed, but there’s a reason so few know of it.

He’s assigned to stay with the village outcast and healer, shy and beautiful Gale, who everyone in the village shuns. Ray cannot understand why until he discovers Gale could heal someone with his hands, but every time he does, death follows.

Enamored with the kind healer, Ray grows closer to Gale, but trouble brews when two children go missing and then two men. Ray finds himself on an unlikely adventure to uncover the secrets of the village of Aesil, the lands hidden beyond it, and becomes thrown into the conflict between its extraordinary inhabitants and a man-eating demon. 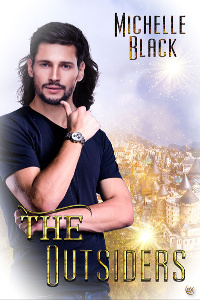 Ray already had his jacket in hand when his assistant stepped in, heels making soft clicks against the office carpet.

He clutched at his car keys. The jagged edges rubbed along the flesh of his thumb as Lisa glanced at the antique clock he had up on the wall.

Ray passed a hand through his hair and sighed. “Just reschedule my evening appointments for me. I don’t think I can handle pretending to care about someone else’s life at the moment.”

Lisa smiled at him as she reopened the door to his office. “You all right?” She still smiled but looked at him with searching eyes, a look he didn’t want, not right then.

“I just need a break. Headache. I’ll see you in the morning, Lisa.” He laid a hand on her shoulder as he passed by, briefly but long enough to convey his thanks.

With steel eyes and fiery red hair, Lisa was his much-needed assistant. Despite her young age and lack of credentials, she was better than his previous assistants, and her mouth matched his temper and sarcasm. He liked her. She was a friend, an unexpected friend, to a winning-obsessed attorney.

The London air was harsh cold with a biting wind. Ray pulled his jacket closer as he left the company building. It was only nearing one in the afternoon. He couldn’t remember the last time he had left work so early since he had become an attorney, climbing the ranks until he made it into Santez and Huiz Law Firm.

He loved his work. He had damn near battled his way through to the top. There was not much in his life but work and too many cups of coffee, usually sourced and supplied by Lisa.

His keys were already in the car door, but he stopped and leaned against it. God, Henri. If there was anything that had made the past few months bearable, it was him.

A year ago, on a trip to France, he’d met Henri—a painter, sleek like his brush strokes and bright-eyed with a hidden wickedness Ray had grown to expect. It had been a rushed meeting, passion and want with the sweetest kiss he had ever had against a cool tiled wall. Since then, Ray was enamored.

He pulled his keys from the car and shoved his hands into the warmth of his trouser pockets. He needed to walk. Fresh air and a slow walk might help his headache, a headache brought on by his mother.

His phone vibrated in his pocket. Ray didn’t need to look at it to know it was his mother calling. Speak of the devil, or was it think of the devil? He was not going to have the same conversation he’d had with his mother every single day in the past few months.

Ray shoved his fingers underneath his armpits and continued walking.

He sipped his hot chocolate along the way to Henri’s studio, cheeks flushed with the power walk and cold chipping away at his face. He balanced the two cups of chocolate as he pushed open the door to the studio with his hip.

Ray’s phone vibrated as he followed the stairs up, nodding to the young boy who sat by the receptionist’s desk.

The studio smelt of paint and faintly of the perfume Henri wore most days. He’d had worn that perfume the day Ray had met him.

Henri had tanned skin and sleek limbs, terrible sleeping patterns and too-long curls of a gentle honey-brown. Ray had never loved someone before. He might love Henri.

The hot chocolate remained warm in his hands, and he sighed at the constant vibrations against his thigh. His mother, Leana, was still calling. Her pressuring was becoming too much for him to handle, the pressure of her new expectations of him.

Leana knew Henri. She had welcomed him into their home with a kiss to the French painter’s cheek and slim arms around his chest, agreeably happy to Ray’s new choice of a lover. The day after, she had told him plainly, “Better than the one night stands you’re so fond of.”

Ray couldn’t have argued with that. At thirty-six, he was tired of waking up to unimportant faces and meaningless sex. As much as he hated commitment, he might have something solid with Henri. After one year with the same man, more months than he’d ever spent with anyone else, he wanted to think so.

The halls led right to where Henri worked. Henri liked to paint with music, rock or classical. The last time Ray had been here, Henri had been sketching to a French singer Ray had never heard of. Today it was the soft strains of classical—Summer by Vivaldi, one of Ray’s personal favorites. Ray smiled as he heard it. Walking into the sounds of Summer playing, it was all overshadowed by the squelches of rough sex and the smell of it.

Ray heard Henri’s moans, the crude sounds of fucking, saw the arch of his neck as another man kissed his mouth, hands squeezing his sides. Vivaldi played in the background. Ray stood there, watching them on Henri’s couch, the couch where they’d had sex too many times to reference.

Henri didn’t see him with his eyes closed, clenched in pleasure for a man whose face Ray could not see. He nearly dropped both cups. Instead, he gripped them tighter. Ray had the urge to walk up to them. To ask Henri why. To throw the cups against the wall or at them, anything, to scrub away the choking pain in his throat and chest.

Ray didn’t do anything. His throat was too tight. He couldn’t swallow, and the hurt went away as quickly as it came. His lips pressed into a thin line, and he turned away. Ray left the studio, giving the two cups of hot chocolate to the boy at the desk in front.