The Path to Forever (MM)

Could you handle living forever, knowing you would watch your friends grow old and die?

These are questions newly minted Doctor Marco Sartori d’Argenzio must face when he and his partner Danilo Rosati celebrate Marco’s completed residency and Danilo’s most recent PhD with a vacation at Marco’s father’s home in the Duchy of Aragoni. There Marco learns about his family’s legacy: his father is more than two thousand years old, and he can expect to live just as long.

Marco inherits his uncle’s title amidst adventure and danger, but it breaks his heart to realize that he’ll live only to see the man he’s loved for a decade grow old and die. However, there is hope: Danilo is studying the unique DNA of Marco’s family in hops of discovering the secret -- because Danilo has no intention of leaving Marco alone for what could be forever. 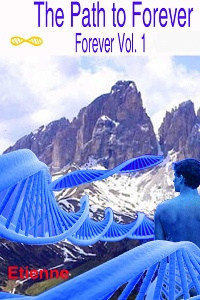 The Path to Forever (MM)

The proprietor of the hotel had just cleared our table and was pouring an after dinner glass of wine for each of us when he snapped to attention and gave a little bow.

“Signora Contessa,” the proprietor of the hotel said, “you honor my poor establishment.”

I looked around and saw a fairly tall and very thin woman approaching our table. She carried herself somewhat rigidly and with an air of authority, was dressed rather elegantly in black, and wore a minimum of jewelry and makeup. Her silver hair was worn in a chignon, and I guessed her to be in her seventies. Her face was fairly free of the lines of old age -- she must have been a striking woman in her youth. Marco and I stood as she approached our table, trailed by the priest we’d met in the church.

“You have your mother’s eyes,” she said to Marco as she extended her hand. “I am la Contessa di Conti, your grandmother.”

“Marco d’Argenzio,” he said, with a small bow, “and this is my friend Danilo Rosati.”

I extended my hand and said, “Pleased to meet you, Signora Contessa.”

“Likewise,” she said, taking my hand.

“Thank you,” she said. “I believe you have met Father Rinaldo.”

“We had a conversation in the church yesterday,” Marco said, “but there were no actual introductions made. Will you join us as well, Father?”

The priest and la Contessa sat. She began studying Marco’s face carefully. “Your presence in this town has come as something of a shock,” she said. “Until yesterday, I did not know that you existed, or that my daughter still lived.”

“What did your husband -- my grandfather -- tell you about what happened all those years ago?”

“That our daughter had become involved with a totally unsuitable man and that he had sent her to America for her own good. Later, he told me that he had arranged for her to be married. Later still, he said that she had run away from her husband and could not be located.”

“And you accepted that explanation?”

“In those days, my husband ruled his family with an iron hand. I participated in the business affairs, but we were beginning to drift apart. I spent part of each the year in my villa near Siena; after your mother was sent away, I began to spend most of my time there.”

“He is dead, and I am in charge of my own affairs. Now tell me, is your mother well?”

“She is physically well, but the ordeal she went through affected her mind. How much do you know of what happened back then?”

“Can you bear to hear the truth of it?”

“My mother, when she was seventeen, met a man who was making an extended tour of the region and was a guest in this hotel for several months. They fell in love, and she wanted to marry him. They kept their relationship a secret from everyone, including you, it seems, although I’m surprised that she didn’t at least telephone you.”

“When she told my grandfather that she was pregnant and wanted to get married, he had the man arrested and held in jail. While that was being done, he had my mother drugged and put on an airplane to America. When the plane landed in the USA, it was met by an agent of my grandfather and a priest. My mother was taken to a church, where she was forced to marry the man, even though she was still slightly sedated, and the marriage wasn’t really legal. It gets worse. Shall I continue?”

“Her new husband asserted his marital rights forcibly and with considerable violence. The violence continued for some time; it is truly a miracle that she didn’t suffer a miscarriage. Eventually -- with the aid of a neighbor -- she ran away and found sanctuary in a shelter for battered women.”

Although her face revealed no emotion, la Contessa spat out an oath.

“My father, after he was released by the local police, returned to his home and hired detectives in an attempt to locate her. It took him quite a while and cost him a great deal of money, but a few months before I was born, he located her. He begged her to divorce her husband and marry him, but her Roman Catholic background was too strong, and she refused. So, he purchased a house for her and hired people to take care of her. I’m told that by the time I was born, she was already descending into a form of madness.”

By this time, la Contessa’s control had slipped, and there were tears in her eyes.

“Father Rinaldo told me that you spat on your grandfather’s tomb and cursed him. Under the circumstances, I can hardly blame you.”

“Would you like to see a picture of my mother?” Marco said.