Tom Foster and Noah Webster have been together for three years. In that time, Tom has completed his doctorate, Noah has begun working on his master's, and both men have come into their own as performers. Suddenly international recognition becomes a reality instead of a dream. They even perform at the dedication of a concert hall at the University of Aragoni.

But it's not all smooth sailing. They still have to battle Noah's Uncle Joe over the division of property he owned with Noah's late father. Tom's father has been distant ever since Tom chose music over law school. And Noah's mother's attitude toward his relationship with Tom leaves something to be desired. With their busy performance schedules, will Tom and Noah be able to make peace with their parents and get a fair deal? 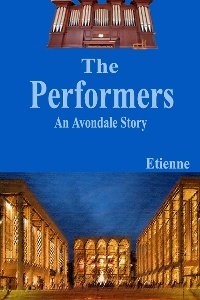 Tom was dreaming, or was he? He felt himself being lifted out of his seat and placed on something soft. Then he felt a prick in his arm, followed by the feeling of motion, and he could hear a siren. Voices were saying something to him -- asking questions, questions that made no sense. Then he drifted off again. The next thing he knew, bright lights were being aimed at his face and there was a murmur of distant voices -- one of which he finally understood.

“Emergency Room, St. Vincent’s. You were in an automobile accident.”

“My partner, Noah Webster. He was driving the car.”

“Is he a blond with green eyes?”

“He suffered cuts and bruises, but is otherwise okay. He’s been patched up and he’s waiting to accompany you to the X-ray department”

“Yes, Sir. You have a broken leg, which is why you hurt. We’re going to give you something for that shortly.”

Broken leg! Shit! he thought. How the heck am I gonna play the organ with a broken leg?

The curtain in front of where he was lying was pulled aside, and he spotted Noah hovering just beyond the people who were bent over his lower body. A few cuts and bruises, indeed, he thought. Noah looks pretty banged-up. He looked pointedly at Noah and smiled, and his smile was rewarded when Noah’s face lit up.

“Okay, Mr. Foster,” someone said, “someone will take you to X-ray now.”

At that he started to get up, but the same voice said, “Going somewhere?”

“True, but the gurney you’re lying on will be wheeled there. If you tried to get up and put any weight at all on that leg, you’d regret it instantly.”

“You can blame that on the mild concussion you have.”

Noah walked into the cubicle, took his hand -- the one that didn’t have a tube attached -- and said, “Are you all right?”

“I guess. How about you, babe? You look like you’ve been through the wars.”

Noah chuckled at that. “Wait ’til you can see yourself in a mirror.”

“Damn, it just hit me,” Tom said. “I need to make some arrangements for tomorrow.”

“Been there, done that,” Noah said. “I called Father John to let him know that I’ve arranged for your favorite pupil to be on the bench tomorrow.”

“I didn’t know you had his number.”

“Did you forget that we synchronized our BlackBerrys?” Noah said.

“I guess I did. I must not be thinking straight.”

“No kidding!” Noah said. “The doctor said you probably have a mild concussion. Tom, I’m so sorry about the accident.”

“Why? I remember seeing that guy about to run a red light. In fact, I seem to recall yelling about it.”

“I should have been more alert,” Noah said.

“I don’t see how. You had a green light and there was no way you could have known that some fool would ignore a red light and ram us.”

“Really? How do you know that?”

The cops gave him a Breathalyzer test while we were waiting for the ambulance. For that matter, they gave me one too.”

“You had wine with dinner, didn’t that show up?” Tom said.

“I only had two glasses, it had been a couple of hours or more since I took the last sip, and I had a pretty hearty meal, so I was okay. On the other hand, the guy who hit us tested at twice the legal limit.”

There was a lengthy wait after the X-rays were taken, but a man in scrubs finally appeared beside his gurney, so Tom looked up at him and said, “What’s the verdict?”

“The verdict, as you put it, is this: your right leg is broken in two places. The good news is that your lower leg suffered a clean break and your upper leg only has a hairline fracture, which means that once the one bone has been set and your leg is in a cast, they’ll mend quite well.”

“You’re going to be in a cast for six weeks.”

“What about my classes?” Tom said.

“After a few days, you should feel up to getting about the campus from class to class on crutches.”

“Dr. Foster isn’t a student,” Noah said, a little too testily. “He teaches at UNF and the students come to him.”

The man looked at Tom more closely and said, “You must be somewhat older than you look, Dr. Foster. In that case, you should have no problem with classes.”