Cam’s life isn’t all that exciting. Boring job, failing relationship, and a handful of missed opportunities. He often wonders how his life might have turned out if he’d made different choices. Especially when he runs into Mattie, his childhood best friend who’s grown into the man of Cam’s dreams.

That dream becomes a reality -- or an alternate reality, at least -- when Cam wakes up one morning in the arms of an adoring Mattie. This version of Mattie and Cam have been together for years, though Cam has no memory of his new life. He’s determined to figure out how he arrived in this new dream life -- and how to keep it. 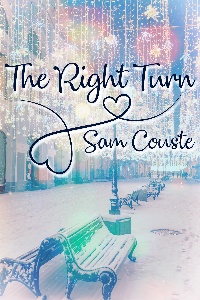 Cam sighed as he entered the coffee shop and settled in to wait in the long line, his eyes trained on the floor. At least the store was warm. He shuffled forward in line a bit too fast, and accidentally stepped on the heels of the guy in front of him.

The guy let out a yelp as he turned around. Cam felt his cheeks burn as he hastily stammered out an apology. “Sorry, I didn’t mean to --”

“Cam? Hi!” The cheerful greeting was delivered by a bright smile accented by hazel eyes and a friendly wave.

Cam blinked. “Mattie?” he asked, even though he knew perfectly well who it was. Mattie Valenti, one of Cam’s closest childhood friends, although they’d lost touch after middle school when Mattie’s family had moved from their small town to the city. They’d run into each other again three years ago and had been in intermittent contact ever since.

Even fifteen years later, Mattie hadn’t changed much. He’d always been a big kid, tall and broad. A natural athlete, Mattie had played basketball in the winter and baseball in the spring. He hadn’t had to work out much to keep his built physique, although Cam knew from their sparse conversations that these days he did weight lifting and spin class somewhat regularly.

Despite his jock status, Mattie had also always been openly bisexual. It was part of why he and Cam had become friends, bonding the way queer kids in small towns did. With Mattie being on good terms with the popular kids, as well as being a kind and friendly person in general, he didn’t have much open hostility to deal with. By association, neither did Cam.

Still, it hadn’t been easy, and Cam had appreciated having Mattie to talk to while he’d worked through his own bisexuality. He might have even had a tiny crush on Mattie, back when they were kids. It would have been hard not to. Mattie had been an engaging kid; everyone had liked him. He’d been cute, too, woeful trappings of middle school style trends aside.

Mattie was still good looking, truth be told. His olive complexion was just as smooth as it had been when they were kids, never a blemish in sight. He wore his black hair in an undercut topped with curls that always appeared effortlessly tousled. In contrast to Cam’s daily uniform of jeans, t-shirts, and flannels, Mattie’s style ran more towards bright colors and unique pieces. Today, his quilted black winter coat was accented with a teal scarf, and his eyes were lined in gold. Black polish shone on his fingernails, flecked with gold as well.

Mattie chuckled and shook his head with a smile. “Has it been that long since we’ve seen each other?”

“I think the last time was around Halloween.” It had been October twenty eighth, at three fifteen in the afternoon, in the seasonal candy section of the drugstore. They’d chatted about inane topics such as how many trick or treaters they each expected to get, and whether it was prudent to get peanut free candy in case of allergies, and which bars would have the most annoying patrons out celebrating this year.

Not that Cam was keeping detailed notes or anything. He just happened to remember every time that he and Mattie had run into each other over the past three years.

“That’s right,” Mattie said. “Wow, it has been a long time. We’ve really got to meet up for lunch or something one of these days.”

Mattie’s smile wilted, but he nodded, even though they both knew it was never going to happen.