The Sheriff and His Air Goddess (MF)

The Shifters of Freedom Springs 3

The Sheriff and His Air Goddess (MF)

The Shifters of Freedom Springs 3

Ariana swallowed hard, and Ryan suddenly didn’t know if he wanted to hear what she had to say. There was only so much rejection a guy could take.

“Casey told me that perhaps I haven’t handled our…situation as well as I could have.” Ariana nibbled on her bottom lip, and Ryan’s dick shot to full mast in a second. Jesus, this woman had him triggered to fire so damn fast it was almost embarrassing. “Everything I have said, everything I have insisted we do since we have met is what I think is for the best. Well, it was what I thought was for the best. But Casey made me see that perhaps you would see it more of a rejection than what I intended it to be.”

Ryan made a mental note to buy Casey whatever the hell she wanted when he caught up with her. “Yeah,” he said with a nod, “I do see it as a rejection. Not just of what the Fates believe to be what’s best, but of me as a mate.”

“Please. Baby, please. Don’t cry,” he murmured as he raised his hands to cup her face, then gently pressed kisses across her cheeks, his wolf whimpering at the salty taste of her tears.

“That was the last th-thing that I w-wanted you to th-think,” Ariana whispered, and the regret in her tone had him stepping into her more firmly. Wrapping his arms around her, he leaned forward to press his forehead to hers. “I truly thought n-not being with you, or acknowledging the mating bond between us, would be what was b-best for you. But I see n-now that it was only what was best for me.”

Ryan froze for a second, then immediately dropped his hands and stepped back, so fast Ariana stumbled slightly, and he shot a hand out to grab her arm to stop her from falling. Once she was steady and she looked at him in total confusion, he dropped his hand and stood back even further. So this is what it feels like to have your heart ripped from your chest while it’s still beating.

“Ariana.” Ryan’s voice came out raspy, and he cleared his throat in an attempt to shift the lump that had suddenly formed there. “As your mate—wait…no, as a man who has come to care and appreciate you for what and who you are, I must do what is best for you. There is no alternative but to ensure your happiness and safety. If not being mated to me”—God, that hurt to say—“is what is best for you, then, okay. I’ll stop bothering you and making you uncomfortable. I’m, ah…well, I’m sorry. Why don’t you catch up with the rest? I think I’ll just run back to town from here.” Ryan turned and moved to run back into the forest.

“I did it again. I said the wrong thing. Well, not the wrong thing exactly, but the wrong way! I wanted to say that it wasn’t you I had been trying to spare, but myself! Gah—” Ariana made a sound filled with frustration. Then she moved so that she faced him. Damn, she was so beautiful, her long black hair almost shimmering with a hint of blue in the sunlight, green-upon-green eyes that were so bright they were almost like a reflective pool, and he ached to count the freckles that were sprinkled across the bridge of her nose and cheeks with kisses.

“I have dreamed of you all my life.” Ariana’s voice rang clear, no hesitation and no grief. “You have come to me in times of need, in times of joy, and whenever I doubted my choices in life, you were there. The day I called you to ask for your help in rescuing Casey, I knew who you were. Then, when Dad and I arrived here in Freedom Springs, and we met, I felt the mating bond snap between us, and all I could think about, all that was running through my head was how was I going to say good-bye to you.”

Ariana was breathing heavily now as emotions swirled within her, and he could feel an echo of that turmoil down their tenuous link.

“Ryan, I know on every level that my blood is what will stop Aeron this time. I have no doubt in my mind that my blood will play a part in that.”

Ryan’s wolf lurched to the surface at the thought of his mate having to bleed. Neither of them was at all happy that the solution involved her being physically hurt.

“But I want to try to find a way to survive it.”

“Ariana?” he asked softly. Was she saying what he hoped she was with every fiber of his being?

“I have lived my entire life knowing that I was an instrument for a goddess who was fighting to keep our world safe. I trained to control my power, I studied to learn as much about Aeron as I could to try and further my cause, but I have never been selfish. I have never taken something for me, and now that I have found you, I want to be selfish for however long we have together.”

“Hmmm,” Ariana purred as she lowered her legs from his hips and he helped her gently find her feet. “Let me think. What would a grown man want as a prize? Would he like me to kneel down before him, place my hands behind my back, and allow him to fuck my mouth until he comes?” She loved the shocked pleasure that filled his face, and when he closed his eyes on a groan at the picture she painted, she leaned in and whispered, “I would swallow everything you had to give me, lover. Every. Sweet. Drop.”

Ryan’s eyes flew open, and he stared at her, his eyes flashing the blue she knew was his wolf, and Ariana knew he loved what she was saying. Ryan suddenly reached for the zip on her jacket and swiftly drew it down. Then he had her out of her jacket, sweater, T-shirt and jeans in what felt like seconds, until she stood before him in a matching bra-and-panty set.

“Holy Mother of God,” Ryan breathed shakily as he ran the backs of his fingers across the tops of her breasts. The touch of his fingers had her nipples tightening and her body temperature rising. “I have to admit, over the past few months, I have spent a lot of time imagining you naked. I have probably undressed you with my eyes more than a thousand times.”

Ariana smiled at his admission. She figured that they were probably even on that score, as she had doing the exact same thing.

Stripping off his jacket, he reached behind him to remove his sweater in a one-handed, hot-as-hell move. Ariana ran her gaze down his chest, loving the ripple and flex of muscle there. His chest was dusted with a light sprinkling of dark hair, and she couldn’t stop herself from leaning in and rubbing her nipples in the crisp hair.

“Oh God, that feels good,” she moaned as she swayed from side to side, loving his growl of appreciation.

“Well, hold on, my love. It is about to feel a whole shitload better,” Ryan rasped as he pressed a kiss to the side of her neck. Dropping to his knees, he slowly kissed his way to her breasts. Ariana cried out as he opened his mouth over as much of her breast as he could and drew on her strongly. She felt her pussy clench and a gush of her cream slide down her inner thigh.

Her body pulsed with the small orgasm, his mouth never moving from her breast, and when he flicked his tongue over her distended nipple, it stoked her arousal again. Not to the point of another orgasm, but pretty damn close.

“Jesus, you are so damn sensitive and responsive. I felt your pleasure when you came down our link, and I can sure as fuck can smell your arousal. Damn, Ariana, your beautiful pussy is dripping for me, isn’t it?”

Ariana could feel Ryan’s hot breath on her tummy as he spoke, lowering himself to rest on his haunches. The move brought him level with her pussy.

“Damn right only for me,” Ryan snarled. When his eyes fell to her naked pussy, he groaned, and she saw the red flush of arousal sweep across his cheeks. “Holy fuck, would you look at how beautiful your pussy is. It’s the most beautiful thing I have ever fucking seen in my life. So beautiful and bare. I can see your cream glistening on the lips of your pussy. Begging me. Your pussy is begging me to claim it with my mouth and swallow down everything it has to give me, and baby, there is nothing I want more than that!”

He lifted his left leg and pushed his knee between her legs, gently nudging her legs apart. Then he lifted her right leg and placed it on his knee. He shuffled his leg slightly more to the left and then swiveled his leg out further so that her legs were now spread, and he had an unobstructed view of all of her tingly, wet girly bits.

He groaned—to her, the sound was the perfect blend of need and appreciation—and then dove right in. Ariana screamed as he sucked on the lips of her pussy, swirling his tongue around her soft folds. She started rolling her hips against him, trying to rub her clit against his mouth in a desperate attempt to come. God, she needed to come. But Ryan, the sadistic bastard, was having none of it.

With a purely smug laugh, he reached up, placed his large hands against the gentle curve of her waist, and held her still with his hands tight on her hips. Then he tortured her with pleasure. At first he flicked his extended tongue against her clit, driving her to the edge of coming, then pulled away to push his tongue as far inside her as he could. Not nearly damn far enough as far as Ariana was concerned. Then he would go back to flicking her clit.

In no time at all, he had her sobbing with pleasure, her entire body shaking as the tsunami of an orgasm began to build to frightening proportions within her.

“Please! Ryan, please!” she screamed. At her words, he slammed his entire mouth over her clit, sucking it into his mouth, and pressed hard against the swollen nub with his tongue.

And then she flew. 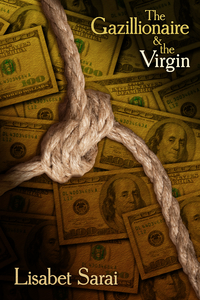 The Gazillionaire and the Virgin
Lisabet Sarai
In Shelf
$4.99

Her Beast (MF)
Sam Crescent
In Shelf
$3.99
Tweets by
sirenbookstrand