What do you get when you mix a priest and a kindergarten teacher in the middle of a zombie apocalypse? Lots of red-hot sparks of passion.

Dove may be a priest, but he's also a man, and he's been alone for a long time. Rescuing Leonie by the side of the road is just the first step on a journey no one expected—one that just might lead to love.

Leonie's family is gone, the zombies are chasing her, and she's on the run, when she's rescued by a priest on a motorbike and taken to a community which welcomes her.

Life should only get better, but the forces that began the apocalypse are building an army of mutated, super-strong zombies. They plan to overtake everything those in the communities have built.

Times are only going to get tougher until they can defeat those with no interest in survival.

Content Warning: this book contains a hot priest, a bucketload of sexy interaction, and zombies. 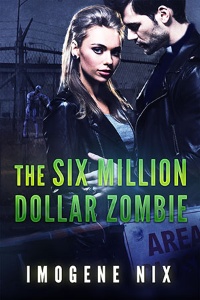 "Look, let's get back to the house and I'll explain over a coffee. Does that work for you?" Dove asked.

Coffee? "You have coffee?" The words escaped as an excited squeak.

"Carefully rationed, yes, but we do. And even better, we've got trees we relocated from a plant store. Actually, lots of the plants we grow now are 'reclaimed.' The farm has cows, sheep, and pigs. We've got chickens and grow our own vegetables. We have a couple of women who have taken over control for preserving the produce too."

Leonie bit her lip. "What about water?" It was one of the largest issues back home. It was the reason things had taken the turn they did. The curdling sensation in her belly when she remembered made itself known again.

"We have a bore, which was harnessed early on, I think. Then we have solar power and mechanics and engineers. They're teaching some of the youngsters now, so when they retire, we have someone ready to take over. We even have a sewerage system. It's rudimentary but works okay for now."

Is this some kind of heaven in the middle of hell?

He ushered her into a small building that looked like a converted shed. The outer walls of bare corrugate though inside was paneled and painted. He'd made some effort with a cheery fireplace in a corner and big throw on the floor. She blinked as they entered the tiny house in the rear, a tidy kitchen and lounge with three doors leading off it.

"That's my room, the bathroom, and this one…" He nudged the door open and sighed, noting the piles of washing on the unmade bed. "This will be yours, and here's your sheets and pillows."

The normality of it struck her as silly, and a tiny laugh bubbled up from her belly. It rolled and grew bigger, and she dropped the boxes she held as hysteria took root.

Dove cursed, dropped the bedding on the tiny two-seater lounge, and dragged her close. "It's okay to cry. It's okay to not feel okay. Just let it out, Leonie."

And she did. The high-pitched laughter turning into hacking sobs that tore her body. It was noisy but also therapeutic to let go. Leonie dug her fingers into the sinews of his shoulders and clung hard.

"Shhh… You've been through a lot. We all understand these things. Now come on. If you want to wash your face, I'll clear my washing, then we'll have a drink of tea or something else, given I take it, you're a coffee drinker?"

"Oh, coffee, please," she mumbled and headed for the bathroom.

It was small and compact. A toilet, small sink, and shower, but he'd told her the water was running. That also meant the toilet flushed. It was far more than she'd had in the last year or two. Leonie made short work of washing up, cleaning her face and arms as best as she could and gazing now and then at the shower stall.

He had a steaming brew waiting on the counter as she entered the lounge. Embarrassment burned her face, waves of heat radiating as she saw him. For the first time, she wondered how this had come to be. She was exactly where she and Gary—and man, did the grief punch hard now, though she restrained it—had planned to be, and she was living with the world's best-looking priest. What a waste!

He wasn't a giant. A little taller than her height, and his hair dark as midnight. His eyes a dark gray-blue that reminded her of storm clouds. Stubble dotted his jawline, yet through the dark, she noted the hard edges of his chin. He'd shed his jacket and stood there in a black shirt and jeans with the white of his clerical collar showing.

"Umm, what kind of priest are you?" Leonie closed her eyes at the banality of her question. God, what an idiotic thing to ask!

He laughed. "What kind do you think I am?"

She bit her lip. In the midst of all this mess, she found him attractive.