The Things We Hide at Home (MM)

However, David doesn't gel well with Tenny's overtly brash best friends, all of whom believe there's something strange about him. Tenny understands David's awkwardness, seeing something of his former self in him, and he quickly grows fond of his new friend.

In the meantime, Tenny does his best to deal with being stalked by an unknown stranger, wanting so hard to believe David is innocent.

Tenny fails to see how someone so quiet and fragile could ever do such horrible things, and is unable to stop from falling for him. Still, the unanswered questions, David's evasiveness surrounding his past, and co-incidental circumstances leave Tenny no choice but to confront the truth. 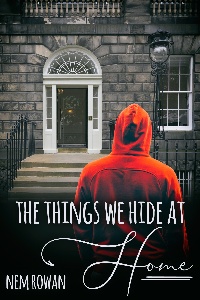 The Things We Hide at Home (MM)

"I really enjoyed going to the cinema with you," I told him as I gazed at him, aware of the adoration in my eyes. It was really hard to reel myself in even though I knew I was moving quickly.

"Me, too. I -- I don't usually have anyone to go with," he confessed, somewhat nervously. "Usually I'm that weird old guy who sits in the back row on his own."

"I'll be your cinema buddy from now on," I stated, as though he didn't have a choice, but I had the feeling he would want me to be anyway. "We'll go and see films together and instead we'll be that weird gay couple who snogs in the back row."

Colour rose into his face, a vivid blossom that turned his cheeks and even his neck bright red.

"You'd like that, huh?" I whispered, leaning closer to try and catch his eye. I could tell he did from the way he chewed his lip and looked anywhere but at my face. He nodded slowly. I smiled as I reached to touch his face, my heart beginning to pound as I carefully stroked his jaw, loving the sensation of the stubble on his skin and the warmth emanating through it.

"And if you ever wanna fulfil that robot boyfriend fantasy of yours ..." I began, watching as his blush visibly darkened. I laughed. "I'm just teasing you now. But really, if you ever wanted to, I'd be up for it."

"Don't apologise. I'm very fond of your shyness." I lifted my glass and sipped what remained out of the bottom of it before putting the empty container on the table before us. I felt hot and slightly woozy from the alcohol.

"How do I do what?" I frowned slightly, not understanding what he was referring to.

"I wasn't always confident. I used to over-compensate when I was younger because I was self-conscious and shy. I used to say things that hurt people without realising how mean I was being. I realised behaving like that wasn't confidence, but was rather because of a lack of confidence," I explained, turning in my seat so I could face him properly and rest my shoulder against the back of the sofa. "I said a lot of dumb shit. It was only because of my friend Vanessa that I learned to really be myself. She showed me if I learned to show compassion towards myself and care for myself empathetically, then naturally it would radiate outwards when I communicated with other people."

"Vanessa is pretty scary-looking," he admitted, seeming ashamed he found her so.

"Looks are deceiving. Don't get me wrong, she will have cowering men kissing her toes and prostrating themselves before her, and she knows how to inflict excruciating pain, but she has this inner calm and wisdom about her. My brother is like that, too. It's like they were born old." I chuckled, imagining Gerard dressed like a giant baby in a crib. "You gotta learn to show yourself compassion and forgive yourself. Would you be so harsh on someone else if they were shy around you?"

"Then why do you punish yourself for being shy?"

He gnawed at his bottom lip whilst staring into the froth of his beer, his half-closed eyes preventing me from seeing into them.

I nodded, understanding him completely; I had had the exact same thoughts about myself in the past. I slowly lifted my hand and placed it over one of his, his eyes immediately widening as he stared down at it.

Devil in the Details (MM)
Lynn Hagen
In Shelf
$5.50
Tweets by
sirenbookstrand