Major Liam McGregor is a career soldier. Chosen by the leader of the United Republic to transport a government protectee to safety, Liam takes on a task that has cost his predecessors their very lives.

Alora of Delawon is an alien princess who holds the key to the survival of mankind. With the women of the United Republic left barren by previous chemical warfare, Alora’s ability to bear humanoid children makes her the government’s most valuable commodity.

Together, they make the trek from the government’s safe house back toward the current capitol, fighting off raiders, survivalists, and an unexpected attraction to one another.

Will their desires put them in danger? Or, will their being together become more important than the mission? 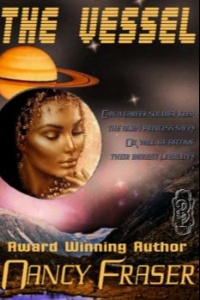 Liam McGregor crossed the embossed seal, pressed his hand to the encoded screen, and stepped into Cal Stewart’s office.
Cal, the leader of the military branch of the United Republic, sat behind a huge oak desk, his attention given to the older, rather gaunt-looking man who stood before him. Dressed in a dark, worn suit, his back bent with age, the man turned and raised his weathered gaze in Liam’s direction.
“Is this the guy?” the old man asked.
“Yes,” Cal confirmed. “Liam McGregor, this is John Barrow, Sciences Division Director. He’s come to request our help, and I’ve assured him you’re the best man for the job.”
Liam nodded. “What job would that be, sir?”
“Sit,” Barrow said, waving his hand in the direction of the nearby chair. “I have some background information to give you. It will explain everything, and define your part in saving mankind.”
“Mankind?” Liam repeated in question.
“Yes.” Cal’s response was filled with conviction. “Our future depends on a successful mission.”
Liam lowered himself into the closest chair, his focus on the strange man who’d sought him out. Barrow shuffled across the room and perched himself on the edge of Cal’s desk. He drew a long, ragged breath and began.
“A little over eight years ago, the government discovered a small group of women who possessed a rare DNA string and previously unknown blood type. A very valuable blood type.”
Liam cast a glance in Cal’s direction. “Valuable in what way?”
Cal lowered his gaze, his robust voice a mere whisper when he admitted, “It allows them to procreate. To carry on with life.”