A catastrophe in the past nearly wiped out the human race. Those who survived became a part of a dictatorial society. Stark Ramsey is a rebel, known as an agitator, trying to oust a tyrannical potentate. The potentate lives in a luxurious palace behind a wall with all the amenities such as electricity, robot servants, and an air force. His constituents are peasant farmers who live outside the wall in a village of huts one would expect to find in the sixteenth century, not the twenty-fifth. The agitators live in a fortress with obsolete equipment and weapons appropriated by whatever means available.

When the potentate destroys the agitators’ primary defense system, Stark has to sneak into the palace and steal repair parts.  His friend Chad is attempting to create a force field designed to cloak a person, and he needs parts, too.  With use of a part Stark brings back, Chad accidentally creates a time machine. As war escalates, Stark goes back into the past to alter the future, but the past has a few surprises of its own and is not so easy to change.

Stark finds hope in the arms of a woman who’s everything he could want and more. Will he find love, or will he doom the future? 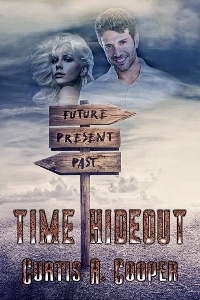 “Bring me a clean subject—not one of those harlots from the pool you pulled from the last time,” the potentate ordered.

Jude had two rules he never deviated from. He never allowed his first name to be uttered, and though monarch meant the same as potentate, he believed the former made him appear as dictator. He was, and he knew it, but he felt that being perceived as a just ruler helped soften the sting of his orders.

As he sat on his golden throne centered at the end of the massive hall, he glanced around the majestic gallery. First he looked over the rows of padded pews on either side of the aisle that ran the entire length of the room. Then his gaze stopped on each of eight larger-than-life portraits of his ancestors adorning the left and right walls. He suddenly pasted on his familiar wry grin. Fools never took advantage of our technology. My portrait will remain on the wall behind my throne forever.

Looking down at his metallic hand, he squeezed the armrest and stood. Rather than descend the three red-velvet carpeted steps in front of him to the center aisle, he walked around behind the throne to exit through a secret passage that had opened with a code he’d punched into the hidden keypad of the armrest.

At the end of the short passage, the back side of a bookcase opened into a sitting room—part of the master bedroom suite. There were no books on the case, only various decorative displays—trophies from early battles won and gifts of the lords trying to win his grace. Books had been outlawed and destroyed by Jude’s grandfather after each had been digitized and uploaded into the palace archives. Jude paid no attention to the room’s furnishings but passed through it to reach his bed chamber.

He entered into a spacious walk-in closet and selected a turquoise silk robe. Returning to the bedroom, he set it down on the greatly oversized bed. He removed his shirt, exposing a bare chest and bionic arms attached at the shoulders. Rather than skin colored, they were sleek and metallic, almost stainless steel in appearance―however, the material was much more durable.

Next he removed a pair of stretchable fabric trousers to reveal legs that matched his arms in appearance, then slipped off a pair of soft cotton socks from his metallic feet and toes, built to mimic his original fleshy equipment. He left his boxers on, hiding the remaining human portion of his body, as he wrapped himself up in a robe to await the evening’s guest.

He glanced at his reflection in the full-sized mirror to the left of the closet. Satisfied with what he saw, he grew serious. I’ll have his head if he brings me another useless tart.

Boden walked out through the gigantic solid metal gate, opened to allow him access to the lowly constituents—obedient serfs. With an armed entourage surrounding him, he traveled up a mound and climbed the two hundred and fifty-seven steps to the top of a tower that overlooked vast fields of vegetables tended by the villagers.

Scanning the workers, he spotted a prospective target and trained his telescopic eyes on her. “Call the Block C administrator and have him escort the young blonde in the red outfit to the tower.”

Boden descended the steps and waited at its base for his selection of royal companion for the night. She’d best appease him, or she’ll learn a new meaning for pain.

“As you commanded, sir,” the administrator offered.

He nodded, turned, and left the way he’d arrived.

Boden looked up and down the young woman. Satisfied with her appearance but concerned about her personality, he began to interrogate, asking first, “Do you know why you are here?”

The woman looked up at Boden for the first time. “No, sir,” she answered in a nervous tone, almost as though she was replying with a question.

“You are to be the potentate’s guest for the evening. How old are you?”

Boden smiled. “That’s right. Farm tenders don’t concern themselves with age. Never mind. It’s not important. What is your name?”

“Please!” a woman called as she ran up the mound to the tower. “Don’t take her. She doesn’t know how to serve.”

She halted immediately. “Please, sir. She has no experience.”

“Good. After tonight, she’ll have all the experience she needs.”

“I don’t think that will be an issue. I will make sure of it. Now, return to your block, woman.”

“You are beyond your usefulness in that capacity. Now, go!”

She ran to Tara and reached out her hands.

Boden backhanded the woman, sending her rolling down the hill. He faced Tara and asked, “Do you wish to join her?”

Turning toward another sentry, Boden directed, “Take that woman to the punishment station.”

“Sir. Let her go. Please. I’ll be no trouble. I’ll do everything you wish of me, I promise.”

He turned toward Tara. “No questions asked?”

“No questions asked,” she answered confidently.

Tara glanced at the woman. When the woman looked back, she closed her eyes and nodded.

As they walked toward the compound, Boden asked, “Who was that woman?”

“She was my deliverer.”

Boden laughed. “I see. Do you know what a deliverer is?”