The greatest risk is disguised in trouble.

Jade Brennan is living with a family curse. If she falls in love, it will end in heartbreak. Because of this, she's not taking any chances, and she's learned to protect her heart.

Nate Miller leads a double life. In one, he's a major rock star with a huge fan base. In order to have a semi-normal life, he wears a disguise when he's in his rock persona. Nate doesn't necessarily love the music his band plays, but he followed in his father's footsteps, vowing to keep his memory alive after he died. In Nate's other life, he's an everyday guy temporarily teaching music lessons at the primary school where Jade is a teacher.

When Jade accidentally discovers what Nate's hiding, she promises to keep his secret. If the truth about his identity was revealed, his career would be ruined.

As they work closely together, sparks fly between them. Because of Jade's family curse and Nate's grueling touring schedule, they know a relationship will never work, but a casual fling is perfect. But the more time they spend together, feelings grow stronger and things become more than just casual.

Can they overcome the obstacles that stand in the way of a relationship, or will family curses and obligations keep them apart? 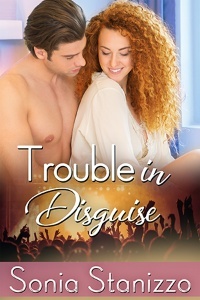 "It's you…the singer guy." The woman's eyes grew wide, and her breath got a little choppy.

There were different types of groupies. The ones who acted surprised when they accidentally ran into Nathan. And the ones who brazenly told him exactly what they wanted to do with him. She fell into the first category.

"Don't act so shocked you found me. I should have known I couldn't sneak out undetected." He turned away to dismiss her.

"Found you? No, I was looking for the party—"

He swung back around. "Look, Freckles." She gasped at the reference and covered her nose with her hand. "No offense, but I'm not into groupies. If you go back to the party, I'm sure Mike or Chris will be happy to take you on."

The hand covering her nose dropped, and she frowned. "Take me on? You think I want… I want…"

Some women tried to deny it, but they were always after the same thing. A hook-up with a band member. "If you go back down the hall and take the other timber door, you'll find the party."

Her posture stiffened, and she puffed out her chest. It wasn't Playboy magazine worthy, but with it heaving like she'd run a marathon, it drew his attention, and the heat worked its way back.

"For your information, Mr. Grunge Band on Steroids, I got separated from my cousin, and I'm trying to find her. I'm not a groupie looking for who knows what with Mike or Chris, nor am I interested in you. And I spend a lot of money on creams to lighten my freckles, so how dare you point them out!"

Nathan let out a surprised bark of laughter. This woman was as fiery as her red hair. He ambled closer to the little spitfire. She'd caught his attention, and if she meant what she said, he'd have no chance getting anything from her. Time for the test.

"I happen to think your freckles are sexy." When he took another step closer, her cheeks flushed pink and she sucked in a breath. He fingered a loose curl on her neck, making sure he touched the exposed skin. "Maybe I won't send you to Mike or Chris. I've never had a hot redhead before." He cupped her face and pretended to lean in as if to kiss her. She'd soon show her true colors.

But instead of her claiming his kiss, one of her hands slammed a palm onto his forehead and the other wrapped around the wrist touching her hair. "What the hell are you doing?"

For a moment he was stunned. This woman who was small enough to fit in his pocket held him back like she was double his size. "Honey, you're playing the shy fan a little too seriously."

With wide eyes, the woman looked from her hand to his head and back down to the wig. "Ummm, I think this belongs to you?"

Slowly, she held it out, and he snatched it from her grasp. It was still tangled around her fingers, and the force made her stumble into his chest. She clasped his arms to steady herself. After a beat she rubbed her hands along his arms. Not in a flirty, trying to feel him up kind of way. More like trying to figure out why he felt like stocking mesh instead of smooth skin.

Nathan stepped back, held her hand, and untangled the wig from her fingers. Shit! He never let anyone outside of the band and family get close enough to stumble upon his secret. Now this redhead would ruin everything; his band and identity would be destroyed.

Dammit. Why did he have to get so close? Test or no test, she was one hot firecracker and he couldn't help himself. Now, after a moment of stupidity, years of keeping his identity a secret was flying out the window.

Turning his back on her, he threw the wig on the lounge, clenched his fists, and took a deep breath. "Forget what you saw here."

"If you breathe a word to anyone, I'll sue your arse off." He swung around, his muscles quivering. "Understood?"

At her startled expression, he deflated. "Get out," he said as he turned his back on her again.

The sound of the door closing echoed through the room.

Envy and Favor
Faye Hall
In Shelf
$4.99
Tweets by
sirenbookstrand