In BORN OF BLOOD, Jesse Banks unknowingly, steps into the middle of a battle between good and evil that has raged on for generations. As the danger escalates, she begins to put the pieces of her clouded past together.

Jesse discovers the truth about her ancestors and the horror that relentlessly pursued them — a horror that now pursues her. To survive, she must join the fight. But the immortal monster that stalks her has other, more sinister, plans, and will stop at nothing to see those plans accomplished. Can Jesse escape a fate worse than death and defeat an age-old evil? 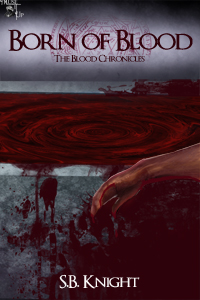 Born of Blood, the first in the Blood Chronicles saga, is SB Knight’s debut novel, and what a great start it is. This dark fantasy novel was released just a few short days ago and I’m sure it will be well received.Step into the distant past and discover where Dracula (aka Drago) came from. His legacy of evil has propelled him through time, searching for the one person who can give him immortality. How will he accomplish his goal? How will Jesse Banks, the object of his obsession, overcome the evil that surrounds her?rnrnThis novel gives the reader a vivid image of the cruelty and madness that spawned centuries of evil. Imagine yourself a young woman with no knowledge of her family’s past, and nightmares that seem more real than possible. Jesse Banks is that young woman, as she discovers her true legacy the reader is taken for a wild and sometimes gruesome ride through history.Being the first of a three books series, this story is a great start to what promises to be a engaging saga. Though sometimes quite gruesome, this novel gives dark fantasy fans a different take on a well known story. The flow of the writing and vivid imagery draws the reader into the story and keeps them on the edge of their seat right to the last page.The unexpected ending leaves you wanting more, with a sense that things are not as they seem. I’m looking forward to the answers to some burning questions. Does Drago live on? Or did they succeed in ending the legacy of evil? Does the legacy live on in the baby Reba is carrying?

The rider’s head swiveled as she searched the hillside for any sign of pursuit. Wet mud flew high in the air from her horse’s hoofs as they thundered down the rutted trail. She shifted her eyes for a split second to look at the bundle snugly bound against her midsection.

The cold night air whistled past her ears, but sweat continued over her brow. The barren trees reached out with their finger-like limbs; threatening to rip her off her mount. At the last second, she swerved her horse down a side path. A glimmer of light in the distance called to her, and a burst of speed brought the weary rider to a ramshackle farmhouse with a single light glowing from a lone window.

The smoke from the fire was a welcoming sign of warmth as she approached the door. A soft knock, and it cracked opened. An old woman gazed beyond the traveler’s shoulder for a moment until she stepped aside and waved her in.

“You sure you weren’t followed girl,” a gray-haired man asked from a seat in the corner next to the fire.

“Yes, I’m sure,” the rider replied as she dropped her saddlebag on the table.

The old woman shut and latched the door. “Now, Pa, leave her be. She’s been on a long ride.”

“Well, if’n she was followed it will be for naught.”

“I said I wasn’t followed.”

Pa stared at the girl for a moment and nodded before repacking his pipe with tobacco. “Then move over here to the fire and warm your bones.” He indicated the hearth.

Elizabeth stood close to it and absorbed the warmth into her stiff fingers. As she warmed, she removed her hat, scarf, and cloak, but the bundled blanket remained against her midsection. I hope I’m doing the right thing. She turned to the old couple.

“I know this is a burden on you. There are some supplies in the saddlebag. It’s not much, but it will last a few days.”

“That witch has done enough horror in these parts, so it’s the least we can do,” Pa spat.

Elizabeth detached the bundle and handed it to her. With experienced hands, she pulled back a portion of the blanket. The angelic face of a sleeping baby girl greeted her.

Pa moved around the table and stared at the baby.

“Never you mind him. I know him like my own hand, and he loves this little bundle already.”

“I knew she would do well here, but mind that the Countess will never stop looking for her once she figures things out,” she warned.

“You think she will,” Ma asked.

Elizabeth bundled up for the journey back. “I’m positive,” she exclaimed as she walked out into the night.

The elderly couple stood in the doorway with the baby and watched as Elizabeth disappeared down the darkened path.

“Did you see what that woman did to Elizabeth’s face,” Pa asked.

“You’ve heard the sayings, Pa. Now you know some are true. She’s a brave girl, doing what she did.”

“Yes, but it might cost her more then she wants to pay.”

The baby squirmed in her blanket, and their conversation shifted to her and keeping her safe.

Elizabeth arrived back at the castle an hour before sunrise. It would be a long day, but if all went well, it would be worth it. She corralled the horse and crept to the kitchen through the back of the stable yard. With silent steps, she climbed the stairwell, ever mindful of other servants who, to find good favor, would notify the Countess. Her door swung open on oiled hinges. With growing confidence, she stepped into the comforting darkness of her room, but her hand stopped on the sconce where the torch should have been. Panic began anew as she patted along the wall, fingers trembling.

“Looking for this?” A voice startled her as the torch came to life. The old gray stone walls dulled the red and orange glow from the flame.

Elizabeth straightened as she turned to face the Countess. She dropped into a deep curtsy.

“Countess, I didn’t expect you up so early.”

The Countess glared at the girl before a toothless grin creased her face. “Oh, this is a special day,” she replied, and moved to the window to gaze over the darkened countryside.

“Before we get to that, I would like to know why you took one of my horses out so late.”

Elizabeth froze as her mind raced for an excuse.

“Never mind that. My newest addition is nowhere to be found on the same night you go for a joy ride. Isn’t that interesting?”

The countess flew over from the window and stopped just as her nose touched Elizabeth’s.

“I have no time for a sniveling little whore like you,” she yelled.
She stepped back, took a deep breath and smoothed out her dress. “Look at me. You’ve got me all in a mess. You are right about one thing — you will be deeply sorry.”