Conservative architect Whitney bounces into another world where she is liberal artist Whit. Not only that but she has a super hot boyfriend named Sawyer. Is this such a bad thing? But what if there are even more realities out there?

Moving from one body to another, Whitney has to seamlessly navigate the changes in her persona without attracting attention. Each reality demands something different of her. Can she keep the many threads of her selves from becoming hopelessly tangled? What draws her back to her original self, time after time?

Intense passion, love, loyalty, redemption, and forgiveness await. With every life comes choices and consequences. Will Whitney choose wisely? And if not, will she find herself being hurt in the process or hurt someone else? Can Whitney navigate the lives of Whit and Annie without changing their destinies and then return to her own life to bravely face what lies ahead? 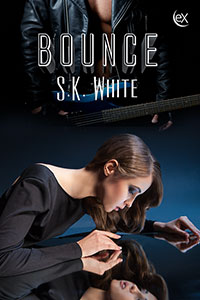 Whitney Ann Rhodes held her breath, closed her eyes, and tiptoed onto the scales. She peeked down at the gauge and read one hundred and fifty-seven pounds. “Why did I eat those damn Twinkies last night.” She squinted at her reflection and scrutinized her curvy naked body in the full-length mirror. She pinched the roll over her midsection. “Will I ever be rid of you?” She tucked a lock of her dark-brown hair behind her ear and fingered the fresh scab on the top of the pimple from her previous night’s assault. “Shit, twenty-eight and still breaking out.”

She grabbed her concealer from the drawer and placed it on the counter next to the bathroom sink. She turned on the faucet and let the cool stream trickle across her fingertips. The light over her mirror flickered on and off. The hairs on the back of her neck stood on end while goose bumps rose on her arms sending shivers and tingles down her spine. The concealer hit the tile floor with a thud. Her eyes darted from side to side. She knelt down and grabbed the tube. The fluorescent lights resumed their steady hum. She gingerly placed the tube back on the counter and shut off the water. She stood firm. “That was odd.”

One last time, she scanned the room, finding nothing. “Hm, must just be me.” She jumped into the shower and kissed the engagement ring on her finger. “God, I hope they don’t cut back on James’s hours again. We can’t be short this month.”

With a long day on the docket and all the projects she needed to finish at the design company, Whitney let the warm water jets release her tense muscles and take her away. She was third in line for a promotion and the pressure was intense to prove herself as an architect. The couple needed the increase in her salary. James worked as an investment banker and generally made a good living. But, unfortunately, the economy took a turn for the worst, so the bank cut back his hours.

Whitney closed her eyes and escaped the chaos. All of a sudden, a strange vibration started at her feet and raced up her body. She put her right hand on the wall to steady the shaking motion. The wall rippled, sending a wave of energy that spread throughout every cell of her five-foot-seven-inch frame. Her eyes blurred. She tried to focus but the eye strain compelled tears to cloud her vision. Her whole body pulsed, and her skin tingled. Once again, the hairs on her arms stood on end. A mysterious pull from the growing ripples expanded within. Then like a thief in the night, the force painlessly extracted her essence.

She fumbled for the shower handles but found none. The ripple’s intensity was too strong. Her stomach churned. A bitter taste of vomit filled the back of her throat. Bright lights blinded her and forced her to close her eyes. Colored lights and swirling energy completely besieged her. A high-pitched shrilling noise reverberated throughout her body. Whitney fought to cover her ears and block the incursion but its potency was too great. Then without warning, there was a dead silence and darkness.

Whitney opened her blurry eyes and blinked until her vision gradually returned. The spinning sensation slowed. A warm shower spray hit her body. She put her hand on a smooth shower wall—now void of any her familiar grout edges. She wiped off her face with the tips of her fingers and re-examined the smooth texture. What the hell. Her tan marble tiles were now a white fiberglass with no grout or marble. The shower floor was now a tub with a plastic shower curtain instead of glass doors. In an attempt to force the end of this dream, she shut her eyes tight and then quickly opened them. But this was no dream—the plastic curtain revealed her new reality—

Whitney turned off the water and pulled back the curtain. Inspecting the small bathroom, she noticed the mirror just above the sink. She stepped on the rug and gazed into the mirror. A woman with long black hair stared back. What’s happening? One side of her head was shaved. She drew closer to the mirror. The face was hers, but thinner, and instead of her shoulder-length hair, she now adorned long hair that flowed down her back. She glanced down at her breasts and viewed a nipple ring on each nipple. She flicked them. They were indeed pierced. Whitney scanned across her upper arms and spotted perplexing tattoos that resembled ancient writing. She turned around and found a tat of a huge dragon draped in roses beautifully place between her shoulder blades. Her familiar curves were replaced by lean, toned muscles—the sleek body of a runner.

Her ears perked at rustling noises coming from another room. She cracked the door opened. There stood a man putting on his faded blue jeans. She stared at the dark-haired man. He was tall and had a runner’s body, too. His arms and back were tattooed just like her new body. Her eyes grew wide as he acknowledged her.

He peered at her and raised his arms. “Hey, beautiful, we’re going to miss the train.”

She closed the door and leaned against the hard wood, drawing in a long slow breath for courage. Okay, okay, Whitney, just calm down and find something to put on. She searched for something to wear but found nothing. Whitney grabbed a towel and put it around her. Then with one last tuck of the towel, she opened the door. The dark-haired hunk put his shirt on and sat on the bed. He slid on his boots and glanced up. She went over to the closet and opened it. Shit, only men’s clothing. She tried the next closet. Thank God. She pulled out a shirt and opened several dresser drawers. The dark-haired hunk glimpsed up at her befuddled.