Bounty of the Heart (MM)

For seven years, Emmett Ward has harbored amorous feelings toward his partner, Jack Robison. A chance encounter brought them together -- Emmett slaved in an illegal warehouse run by a Korean criminal known as the Dragon Lady, when Jack, a notorious bounty hunter with his sights set on her son Lin Ji, was captured. Emmett helped Jack escape in return for his own freedom. They've been together ever since, but Emmett aches for so much more than their platonic partnership.

A new bounty has been placed on Lin Ji's head, sending Emmett and Jack to the wilds of Alaska, where they hope to take out the crime lord during an annual dog-sled race. As they near their target, they run into Monty Becker, another hunter Jack used to know. He takes an interest in Emmett, who is drawn to the sexy, charismatic fellow despite Jack's warnings.

Emmett is torn between the two men -- Monty is more than willing to show him what he's missing, but Jack is what his heart wants. When the three team up to take out Lin, Emmett learns more of the past Jack and Monty share, and discovers just why his partner has ignored his obvious feelings for so long.

Bounty of the Heart (MM)

Obsidian Bookshelf:
"The Alaska setting is vivid. Emmett is a sweet kid, smart and full of optimism. Sticklers for historical research might wonder about his absence of religious guilt and his easy acceptance of his own homosexuality, but I wasn't bothered by that."

Rainbow Reviews: 4 out of 5.
"If you’re looking for a different kind of story with a shimmering romance and well-crafted atmosphere, I recommend this story. You won’t be disappointed."

As the fire gutted low among the coals, Emmett leaned back, one hand on the ground behind Jack. His partner shrugged, as if that would somehow give him more space, but it didn't. For a long moment, Emmett stared into the flickering flames, gathering up his courage. It was cold, he'd reason, and the shelf on which they had camped was open to the elements. Perhaps they could push the bedrolls together, just for the night. Emmett thought if he could only close the gap between them, nature would take over and do the rest. He'd wake in Jack's embrace, his body still humming from the older man's attention. Maybe if Emmett said it was too cold; how could he argue with that? "Jack ..."

A small scurry of stones answered him. In one fluid motion, Jack stood and drew his pistol. Before Emmett could speak, Jack hissed, "Shh."

Emmett strained to hear something else, anything, over the quiet fire. He heard nothing, and wondered if it hadn't been an animal of some kind when Jack leveled his gun and fired.

The report was deafening. Jack aimed a second time. "Show yourself," he called, raising his voice. To Emmett, he muttered, "Bastard's been following us since Juneau."

"What?" Emmett clambered to his feet, ears ringing from the shot. Why hadn't Jack said something earlier?

In the silence, Jack cocked the pistol. "Get the fuck out here," he warned.

From the darkness came a man's voice, jovial and light. "All right already, Jack. Hold up, will you?"

"Who is it?" Emmett wanted to know. "And why didn't you tell me we were being followed?"

Slowly a tall shape extracted itself from the shadows. As the stranger stepped into the circle of light thrown by their fire, a chill passed through Emmett. He took in the weathered cloak covering tight denim pants and a dark shirt, the long rifle slung over one shoulder, the ten-gallon Stetson pulled low over the stranger's face, and wondered how this man knew Jack by name. A fellow bounty hunter? An old friend?

The disgust that flitted across Jack's face as he holstered his pistol suggested otherwise. He took his seat again by the fire, dismissing the stranger. Tossing a small bundle of sticks into the flames, Jack growled, "What the hell do you want?"

The stranger shrugged easily. When he pushed the hat back from his face, he grinned wolfishly at Emmett, his thin, dark beard enhancing his lupine appearance. Tapping the hat firmly into place, he drawled, "Where'd you pick up the kid, Jack? He's too damn pretty to be your type."

Emmett blushed. The stranger couldn't be much older than he was himself. Clearing his throat, he said, "I'm not a kid."

"So I see." The stranger's gaze trailed down Emmett's body, audacious, before rising to meet Emmett's eyes. That look felt invasive almost, as if the man could see through the bulk Emmett wore and behold the body beneath. Emmett's cheeks burned furiously, more so when the stranger winked. "Can't imagine Jack will introduce us. Niceties have never been his strong suit. The name's Monty Becker. Pleasure's all mine. And you are ...?"

"Emmett." He took the hand Monty offered. Its grip was strong and sure, but Monty didn't let go right away -- his palm burned in Emmett's, his wicked grin never faltering. With difficulty, Emmett shook him off. "Do you know Jack?"

Monty laughed. "We go way back. You two mind if I join you?"

Without waiting for a response, he sank down to sit by their fire, folding his long legs Indian-style in front of him. Emmett, all too aware that he alone stood standing, took his own seat again beside Jack. This time, the elbow in his side was quick and sharp, roughly pushing him away. "I didn't say sit," Jack muttered, his voice as cold as the night around them. 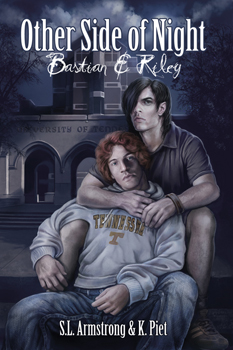